This afternoon in Cyprus, Pope Benedict addressed the Greek Orthodox Archbishop of Cyprus, His Beatitude Chrysostomos II, at the Archbishop's residence in Nicosia. In his address, 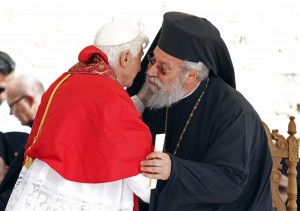 Pope Benedict called for "full and visible communion" between the Churches of the East and the West; a communion "to be lived in fidelity to the Gospel and the apostolic tradition , esteem for the legitimate traditions of East and West, and openness to the diversity of gifts by which the Spirit builds up the Church in unity, holiness and peace," the Holy Father said.
Full text of the Holy Father's address:

Your Beatitude, [1] I greet you with fraternal affection in the Risen Lord and I thank you for your gracious welcome. I recall with gratitude your visit to Rome three years ago, and I rejoice that today we meet again in your beloved homeland. Through you, I greet the Holy Synod, and all the priests, deacons, monks, nuns and lay faithful of the Church of Cyprus. Before all else, I wish to express my gratitude for the hospitality which the Church of Cyprus so generously offered to the Joint International Commission for Theological Dialogue on the occasion of its meeting last year in Paphos. I am likewise grateful for the support that the Church of Cyprus, through the clarity and openness of her contributions, has always given to the work of the dialogue. May the Holy Spirit guide and confirm this great ecclesial undertaking, which aims at restoring full and visible communion between the Churches of East and West, a communion to be lived in fidelity to the Gospel and the apostolic tradition, esteem for the legitimate traditions of East and West, and openness to the diversity of gifts by which the Spirit builds up the Church in unity, holiness and peace. This spirit of fraternity and communion also found expression in the generous contribution which Your Beatitude sent in the name of the Church of Cyprus for those suffering from last year’s earthquake in l’Aquila, near Rome, whose needs are close to my heart. In that same spirit, I now join you in praying that all the inhabitants of Cyprus, with God’s help, will find the wisdom and strength needed to work together for a just settlement of issues remaining to be resolved, to strive for peace and reconciliation, and to build for future generations a society distinguished by respect for the rights of all, including the inalienable rights to freedom of conscience and freedom of worship. Cyprus is traditionally considered part of the Holy Land, and the situation of continuing conflict in the Middle East must be a source of concern to all Christ’s followers. No one can remain indifferent to the need to support in every way possible the Christians of that troubled region, so that its ancient Churches can live in peace and flourish. The Christian communities of Cyprus can find a most fruitful area for ecumenical cooperation in praying and working together for peace, reconciliation and stability in the lands blessed by the earthly presence of the Prince of Peace. With these sentiments, Your Beatitude, I thank you once more for your fraternal welcome, and I assure you of my prayers for you and for all the clergy and faithful of the Church of Cyprus. May the joy of the Risen Christ be always with you!

After his meeting with His Beatitude Chrysostomos II, Pope Benedict celebrated Mass at Holy Cross Church in Nicosia. In his homily, the Holy Father said that only God can release us from "moral and physical enslavement". The Cross, Pope Benedict said, is "the most eloquent symbol of hope that the world has ever seen". The following is the full text from his homily this afternoon: