The following is Pope Benedict's full address from today's presentation of the Instrumentum Laboris for the Synod of Bishops' Special Assembly for the Middle East:

Dear brothers and sisters in Christ, I thank Archbishop Eterovic for his kind words, and I renew my greetings to all of you who have come here in connection with the launch of the forthcoming Special Assembly for the Middle East of the Synod of Bishops. I thank you for all the work that has been accomplished already in anticipation of the Synodal Assembly, and I promise you the support of my prayers as you enter this final phase of preparation. Before I begin, it is only fitting that I recall the late Bishop Luigi Padovese who, as President of the Turkish Catholic Bishops, contributed to the preparation of the Instrumentum Laboris that I am consigning to you today. News of his unforeseen and tragic death on Thursday surprised and shocked all of us. I entrust his soul to the mercy of almighty God, mindful of how committed he was, especially as a bishop, to interreligious and cultural understanding, and to dialogue between the Churches. His death is a sobering reminder of the vocation that all Christians share, to be courageous witnesses in every circumstance to what is good, noble and just. The motto chosen for the Assembly speaks to us of communion and witness, and it reminds us how the members of the early Christian community “were of one heart and soul”. At the centre of the Church’s unity is the Eucharist, Christ’s inestimable gift to his people and the focus of our liturgical celebration today on this Solemnity of the Lord’s Body and Blood. So it is not without significance that the date chosen for the Instrumentum Laboris of the Special Assembly to be consigned should be today. The Middle East has a special place in the hearts of all Christians, since it was there that God first made himself known to our fathers in faith. From the time when Abraham set out from Ur of the Chaldeans in obedience to the Lord’s call, right up until the death and resurrection of Jesus, God’s saving work was accomplished through particular individuals and peoples in your homelands. Since then, the message of the Gospel has spread all over the world, but Christians everywhere continue to look to the Middle East with special reverence, on account of the prophets and patriarchs, apostles and martyrs to whom we owe so much, the men and women who heard God’s word, bore witness to it, and handed it on to us who belong to the great family of the Church. The Special Assembly of the Synod of Bishops, convened at your request, will attempt to deepen the bonds of communion between the members of your local Churches, and the communion of these churches with each other and with the universal Church. The Assembly would also encourage you in the witness of your faith in Christ that you make in countries where faith is born and raised. It is also known that some of you have endured great hardships due to the current situation in the region. The Special Assembly is an opportunity for Christians from the rest of the world to offer spiritual support and solidarity to their brothers and sisters in the Middle East. This is an opportunity to highlight the significant value of the Christian presence and witness in the land of the Bible, not only for the Christian community worldwide, but also for your neighbors and fellow citizens. You contribute in countless ways to the common good, for example through education, patient care and social assistance, and you work towards the building up of society. You want to live in peace and harmony with your Jewish and Muslim neighbours. Often, you act as peacemakers in the difficult process of reconciliation. You deserve recognition for the invaluable role you fill. It is my serious hope that your rights are increasingly respected, including the right to freedom of worship and to religious freedom, and that you will never again suffer discrimination of any kind. I pray that the work of the Special Assembly will help to focus the attention of the international community on the plight of those Christians in the Middle East who suffer for their beliefs, so that just and lasting solutions may be found to the conflicts that cause so much hardship. On this grave matter, I reiterate my personal appeal for an urgent and concerted international effort to resolve the ongoing tensions in the Middle East, especially in the Holy Land, before such conflicts lead to greater bloodshed. With these thoughts, I now present to you the text of the Instrumentum Laboris of the Special Assembly for the Middle East of the Synod of Bishops. God bless your work abundantly! God bless all the peoples of the Middle East!

Following the presentation of the Instrumentum Laboris, Pope Benedict led the assembly in praying the Angelus and proceeded to offer prayers on the occasion of the beatification of the Polish Servant of God (now Blessed!) Jerzy Popieluszko. Blessed Jerzy was beatified today in Warsaw, Poland in the presence of over 150, 000 faithful.

Here is the text from the Holy Father's Angelus reflection this afternoon: Dear brothers and sisters in Christ, At the midday hour it is the Church’s tradition to turn in prayer to the Blessed Virgin Mary, joyfully recalling her ready acceptance of the Lord’s invitation to become the mother of God. It was an invitation that filled her with trepidation, one which she could scarcely even comprehend. It was a sign that God had chosen her, his lowly handmaid, to cooperate with him in his saving work. How we rejoice at the generosity of her response! Through her “yes”, the hope of the ages became a reality, the One whom Israel had long awaited came into the world, into our history. Of him the angel promised that his kingdom would have no end (cf. Lk 1:33). Some thirty years later, as Mary stood weeping at the foot of the cross, it must have been hard to keep that hope alive. The forces of darkness seemed to have gained the upper hand. And yet, deep down, she would have remembered the angel’s words. Even amid the desolation of Holy Saturday the certitude of hope carried her forward into the joy of Easter morning. And so we, her children, live in the same confident hope that the Word made flesh in Mary’s womb will never abandon us. He, the Son of God and Son of Mary, strengthens the communion that binds us together, so that we can bear witness to him and to the power of his healing and reconciling love. Let us now implore Mary our Mother to intercede for all of us, for the people of Cyprus, and for the Church throughout the Middle East with Christ, her Son, the Prince of Peace. And his prayer (delivered in Polish) on the occasion of the beatification of Jerzy Popieluszko: 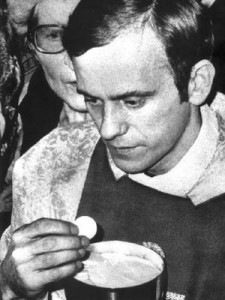 I would now like to say a few words in Polish on the happy occasion of the beatification today of Jerzy Popie?uszko, priest and martyr. [I send cordial greetings to the Church in Poland which today rejoices at the elevation to the altars of Father Jerzy Popie?uszko. His zealous service and his martyrdom are a special sign of the victory of good over evil. May his example and his intercession nourish the zeal of priests and enkindle the faithful with love.]