Priests and Religious join Holy Father in Vespers and Consecration

Pope Benedict arrived in Fatima by helicopter this afternoon where he was received by the Bishop of Leiria-Fatima and other local Catholic authorities and dignitaries. He then proceeded to the Shrine of Fatima in his Popemobile. An estimated 40,000 pilgrims greeted the Pope upon his arrival. 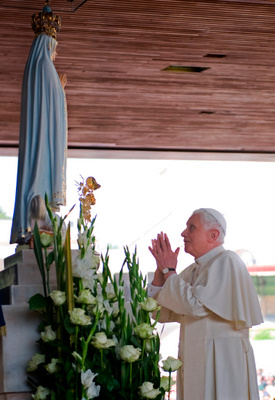 His first stop was to the Chapel of Apparitions, the spot where the Blessed Virgin first appeared to the three shepherd children. The Holy Father prayed before the statue of Mary and offered the gift of a Golden Rose, a gesture that is often made when a Pope visits a Marian Shrine. He recalled his predecessor Pope John Paul II who strongly believed that it was Mary who protected him in the 1981 assassination attempt. He referred to the bullet which Pope John Paul II  placed in the statue's crown saying:

It is a profound consolation to know that you are crowned not only with the silver and gold of our joys and hopes, but also with the 'bullet' of our anxieties and sufferings.

In an act of humilty, he also thanked Our Lady for encouraging prayers for the Successor of Peter, that the Pope "may be strong in faith, bold in hope and zealous in love." Following this the Pope celebrated Vespers with priests, religious, deacons, seminarians, and consrated in the Church of the Most Holy Trinity, an impressive Church that holds a capacity of over 8,500 people. The Church's construction was finished three years ago in time for the 90th anniversary of the apparitions of Fatima. In the Holy Father's Address to the religious he thanked them for being witnesses to the Gospel and to the Church.  He stressed the importance of fidelity to one's vocation and noted the importance of prayer as a "powerful and intense experience of the Lord's love" to help respond to his love that is exclusive and spousal.  See his homily below:

CELEBRATION OF VESPERS WITH PRIESTS,RELIGIOUS, SEMINARIANS AND DEACONS ADDRESS OF HIS HOLINESS BENEDICT XVI Church of the Most Holy Trinity, Fátima Dear Brothers and Sisters, “When the time had fully come, God sent forth his Son born of woman, […] so that we might receive adoption as sons” (Gal 4:4,5).  The fullness of time came when the Eternal broke into time; by the grace of the Holy Spirit the Son of the Most High was conceived and became man in the womb of a woman, the Virgin Mary, type and lofty model of the believing Church.  The Church does not cease to beget new sons in the Son, whom the Father willed to be the first-born of many brothers.  Each one of us is called to be with Mary and like Mary, a humble and simple sign of the Church who offers herself constantly as a spouse into the hands of her Lord. Continue reading

After celebrating Evening Prayer, and just before Benediction, the Pope pronounced an Act of Entrustment and Consecration of Priests to the Immaculate Heart of Mary.  Most striking, was how he included himself as a humble servant among the priests.  You can view the consecration HERE. - CNS photo/Alessia Giuliani, Catholic Press Photo