Mary, Mother of God, Mother for all 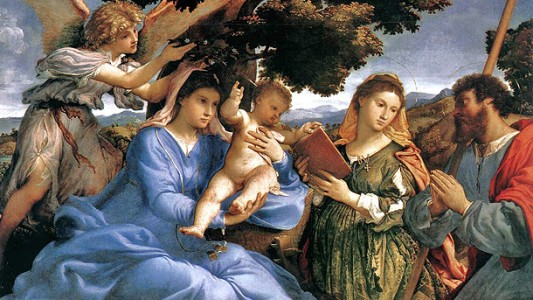 On December 31, 2013, Pope Francis prayed year-end Vespers in St. Peter's Basilica. Vespers began at 5 PM  with Pope Francis presiding over the prayers that constitute the Church’s official, public praise of God in the evening of the last day of the year, to be followed by the singing of the great hymn of gratitude in faith, the Te Deum, and the worship of the Blessed Sacrament before the giving of the blessing of the Eucharistic Lord.
In his homily, Pope Francis focused on the sense of history that permeates the life of those whose lives are signed by faith in Jesus Christ. “The biblical and Christian vision of time and history,” he said, “is not cyclical, but linear: it is a path that leads towards a conclusion.” He explained that the passing year does not represent an end in itself, but a step on the way towards a reality that is to be completed – another step toward the goal that lies ahead of us: a place of hope and happiness, because we will meet God, the Reason of our hope and Source of our joy.
Pope Francis went on to say that, as the year 2013 comes to an end, we collect, as in a basket, the days, the weeks, the months that we have lived, to offer everything to the Lord.
Pope Francis concluded, inviting everyone to look toward the new year, in a spirit of gratitude for that, which we have received, repentance for that, in which we have failed, and resolve to work with God’s grace to better our lives, our communities and ourselves.
On Wednesday, January 1, 2014, Pope Francis welcomed the new year with a solemn morning mass in St. Peter’s Basilica, calling the faithful to look to Mary as a Mother to all and messenger of hope.
Here is the official English translation of the Holy Father's Homily:

In the first reading we find the ancient prayer of blessing which God gave to Moses to hand on to Aaron and his sons: “The Lord bless you and keep you. The Lord make his face to shine upon you, and be gracious to you. The Lord lift up his countenance upon you and give you peace” (Num 6:24-26). There is no more meaningful time than the beginning of a new year to hear these words of blessing: they will accompany our journey through the year opening up before us. They are words of strength, courage and hope. Not an illusory hope, based on frail human promises, or a naïve hope which presumes that the future will be better simply because it is the future. Rather, it is a hope that has its foundation precisely in God’s blessing, a blessing which contains the greatest message of good wishes there can be; and this is the message which the Church brings to each of us, filled with the Lord’s loving care and providential help.
The message of hope contained in this blessing was fully realized in a woman, Mary, who was destined to become the Mother of God, and it was fulfilled in her before any other creature.
The Mother of God! This is the first and most important title of Our Lady. It refers to a quality, a role which the faith of the Christian people, in its tender and genuine devotion to our heavenly Mother, has understood from the beginning.
We recall that great moment in the history of the ancient Church, the Council of Ephesus, in which the divine motherhood of the Virgin Mary was authoritatively defined. The truth of her divine maternity found an echo in Rome where, a little later, the Basilica of Saint Mary Major was built, the first Marian shrine in Rome and in the entire West, in which the image of the Mother of God – the Theotokos – is venerated under the title of Salus Populi Romani. It is said that the residents of Ephesus used to gather at the gates of the basilica where the bishops were meeting and shout, “Mother of God!”. The faithful, by asking them to officially define this title of Our Lady, showed that they acknowledged her divine motherhood. Theirs was the spontaneous and sincere reaction of children who know their Mother well, for they love her with immense tenderness.
Mary has always been present in the hearts, the piety and above all the pilgrimage of faith of the Christian people. “The Church journeys through time… and on this journey she proceeds along the path already trodden by the Virgin Mary” (Redemptoris Mater, 2). Our journey of faith is the same as that of Mary, and so we feel that she is particularly close to us. As far as faith, the hinge of the Christian life, is concerned, the Mother of God shared our condition. She had to take the same path as ourselves, a path which is sometimes difficult and obscure. She had to advance in the “pilgrimage of faith” (Lumen Gentium, 58).
Our pilgrimage of faith has been inseparably linked to Mary ever since Jesus, dying on the Cross, gave her to us as our Mother, saying: “Behold your Mother!” (Jn 19:27). These words serve as a testament, bequeathing to the world a Mother. From that moment on, the Mother of God also became our Mother! When the faith of the disciples was most tested by difficulties and uncertainties, Jesus entrusted them to Mary, who was the first to believe, and whose faith would never fail. The “woman” became our Mother when she lost her divine Son. Her sorrowing heart was enlarged to make room for all men and women, whether good or bad, and she loves them as she loved Jesus. The woman who at the wedding at Cana in Galilee gave her faith-filled cooperation so that the wonders of God could be displayed in the world, at Calvary kept alive the flame of faith in the resurrection of her Son, and she communicates this with maternal affection to each and every person. Mary becomes in this way a source of hope and true joy!
The Mother of the Redeemer goes before us and continually strengthens us in faith, in our vocation and in our mission. By her example of humility and openness to God’s will she helps us to transmit our faith in a joyful proclamation of the Gospel to all, without reservation. In this way our mission will be fruitful, because it is modeled on the motherhood of Mary. To her let us entrust our journey of faith, the desires of our heart, our needs and the needs of the whole world, especially of those who hunger and thirst for justice and peace. Let us then together invoke her: Holy Mother of God!