Pope arrives in Canada focused on elders and on repentance 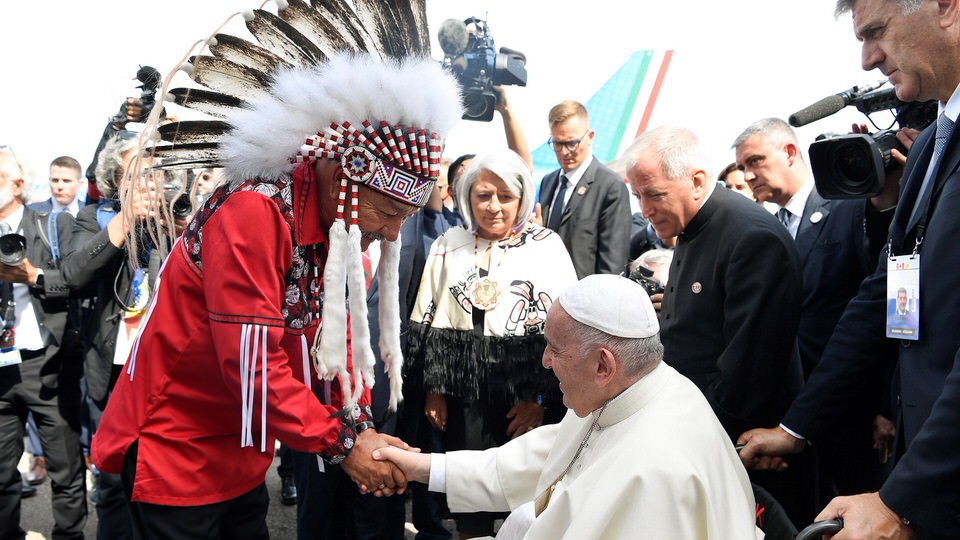 Pope Francis greets Grand Chief George Arcand of the Confederacy of Treaty Six First Nations as he arrives at Edmonton International Airport July 24, 2022. Looking on is Mary Simon, governor general of Canada. The pope was beginning a six-day visit to Canada. (CNS photo/Vatican Media)
EDMONTON, Alberta (CNS) -- After a flight of more than 10 hours from Rome, Pope Francis landed in Edmonton and met briefly at the airport with Indigenous leaders, Canada's governor general and prime minister before heading to the local seminary for a rest. Governor General Mary Simon and Prime Minister Justin Trudeau walked alongside the pope as an aide pushed him in a wheelchair into an airport hangar for the informal welcome. Four Indigenous drummers heralded the arrival of their special guest. The pope, governor general and prime minister were greeted by: RoseAnn Archibald, national chief of the Assembly of First Nations; Gerald Antoine, regional chief of the Assembly of First Nations; Natan Obed, president of Inuit Tapiriit Kanatami; and Audrey Poitras, president of the Métis Nation of Alberta. On the long flight from Rome, Pope Francis kept his habit of making a few brief remarks to reporters traveling with him and then -- leaning heavily on a silver cane -- walking all the way down one aisle and back up the other to personally greet the more than 75 reporters, photographers and camera operators traveling with him. "I'm happy to greet you like always," he said. "I think I can get around." The pope had boarded the plane by "ambulift," a platform that lifted him in his wheelchair to the ITA plane. Pope Francis told the reporters his visit to Canada July 24-29 would be "a penitential trip" to meet with, listen to and apologize to members of Canada's First Nation, Métis and Inuit communities, especially those who experienced abuse or attempts at forced assimilation at church-run residential schools. 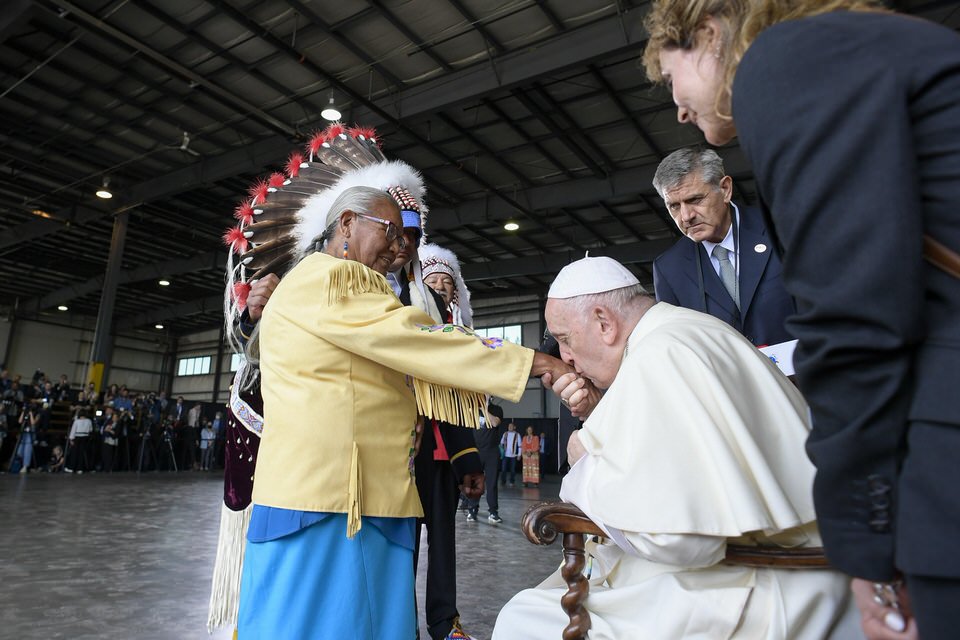 Pope Francis kisses the hand of residential school survivor Alma Desjarlais of the Frog Lake First Nation during a welcoming ceremony at Edmonton International Airport July 24, 2022. The pope was beginning a six-day visit to Canada. (CNS photo/Vatican Media)
Pope Francis also noted that he would be flying to Canada when he usually would lead the recitation of the Angelus prayer. "But let's do an Angelus here," he said, referring mainly to his customary Sunday midday address. With the Catholic Church around the globe marking the World Day of Grandparents and the Elderly July 24, the pope's mini-, airborne-Angelus address focused on how "grandfathers and grandmothers are those who have handed on history, traditions, customs -- many things." "Young people need contact with their grandparents, to go back to them, to their roots, not to remain there, not, but to carry them forward," he said, like a tree that draws nourishment from its roots to flower and produce fruit. As a Jesuit, Pope Francis said he also wanted to urge members of religious orders to treasure their elderly members -- "the grandparents of consecrated life." "Please, don't hide them away," the pope said. The importance of elders as the keepers of wisdom and as educators of the young was expected to be a recurring theme during the pope's visit to Alberta, Quebec and Nunavut. Cardinal Pietro Parolin, Vatican secretary of state, was accompanying Pope Francis on the trip. He told Vatican News July 23 the pope's focus would be on acknowledging and apologizing for the past, but also looking at the present and future. When the pope met April 1 at the Vatican with First Nation, Métis and Inuit representatives, the cardinal said, "the pope expressed shame and indignation at the actions of not a few Christians who, instead of bearing witness to the Gospel, conformed to the colonial mentality and past government policies of cultural assimilation, which severely harmed indigenous communities." "Especially painful was the role of some Catholics in the so-called residential school system, which resulted in the removal of many indigenous children from their families," the cardinal said. Many children endured emotional, physical and sexual abuse at the schools, in addition to being cut off from their native languages, customs and ceremonies. That past, Cardinal Parolin said, is why Pope Francis described his trip as a "penitential pilgrimage" and will focus on "healing wounds and reconciliation." However, he said, the pope's visit also will include a reflection on Indigenous values that can and should be shared with the wider society and church today. "Indeed, it can be fruitful for everyone to rediscover many of their values and teachings," such as concern for family and community, care for creation, the importance of spirituality, the strong bond between generations and respect for the elderly, the cardinal said. The pope's trip was planned around the feast of Sts. Joachim and Anne, the grandparents of Jesus. Pope Francis is scheduled to join Indigenous pilgrims on the feast day, July 26, at Lac Ste. Anne. At a news conference broadcast on YouTube before the pope's arrival, Archbishop Richard Smith of Edmonton told reporters, "I believe that this will be a very important moment in the history of our country." Father Cristino Bouvette, an Indigenous priest from the Diocese of Calgary, said everything about the papal visit was planned around the Indigenous communities, especially the survivors of residential schools, and their search for justice, healing and reconciliation. The program, he said, "has been designed with the explicit intention of highlighting and remaining present to the needs and concerns that have inspired the pope to come here in the first place. He probably likes Canada, but he's not coming here because he likes Canada. He is coming here to address this specific and particular pastoral need as a pastor." 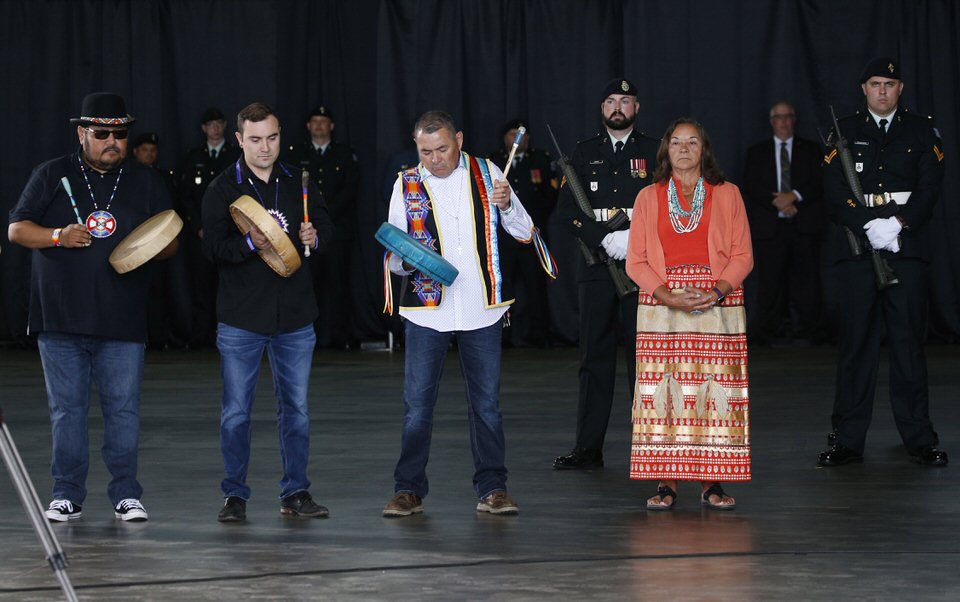