Pope appoints Canadian as Nuncio to Kuwait, Bahrain, and Qatar

Kuwait, Bahrain, and Qatar are three locations that evoke images of exotic foreign lands. It's certainly off the usual travel route for most North Americans and it's not every day we here at S+L read those names in the Vatican's daily press bulletin. Today, however, the Holy See appointed a Papal Nuncio to those three places -- a Canadian from Toronto, no less! 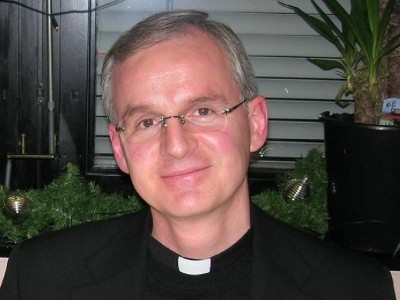 Monsignor Petar Rajic was born in Toronto in 1959. He attended Michael Power/ St. Joseph High School then went on to the University of Toronto. After completing his B.A. he entered the seminary in Sarajevo. He has been in the Vatican's diplomatic service for the past 15 years and served in Senegal, Iran and Lithuania before being posted to the Secretariat of State's office in Vatican City and to the Prefecture of the Papal Household. With his new position Monsignor Rajic becomes the Pope's ambassador to Bahrain, Qatar and Kuwait, and will be elevated to the rank of Archbishop. According to the Vicariate of Kuwait's website there are 300,000 Catholics in Kuwait, belonging to various different rites including the Latin rite, Maronite, Greek Catholic, Coptic, Syrian, Armenian, Syro-Malabar, Syro-Malankar and Chaldeans. Christians make up 12% of the population and their freedom to practice their faith is guaranteed in the Kuwaiti constitution. In Bahrain there is one Catholic Church, one Catholic school and the Comboni sisters serve the faithful. There is also one Catholic church in Doha, the capital of Qatar, which opened about a year ago with special permission from the Emir of Qatar. Masses are said in 14 different languages at Our Lady of the Rosary Church in Doha and the congregation is made up of foreign workers posted in the country, or immigrant workers in service jobs. We pray for Msgr. Rajic in his new role as Archbishop and Apostolic Nuncio to Kuwait, Qatar and Bahrain.