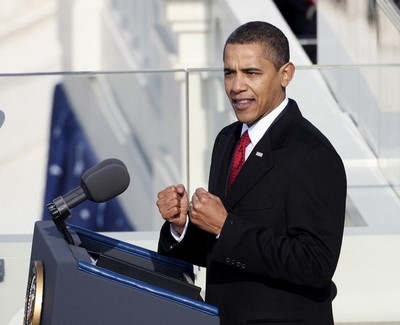 Pope Benedict XVI extended his well wishes to Barak Obama as he was sworn in Tuesday as the 44th President of the United States Tuesday.
In a telegram, the Holy Father assured the newly elected President Obama of his prayers, that God may grant him “unfailing wisdom and strength in the exercise of your high responsibility.” The telegram continued: “Under your leadership may the American people continue to find in their impressive religious and political heritage the spiritual values and ethical principles needed to cooperate in the building of a truly just and free society, marked by respect for the dignity, equality and rights of each of its members, especially the poor, the outcast, and those who have no voice.” Noting the United States’ responsibilities on a global level, the Pontiff offered reference to chapter 25 of Isaiah: “I pray that you will be confirmed in your resolve to promote understanding cooperation and peace among the nations, so that all may share in the banquet of life which God wills to set for the whole human family.” (cf. Isaiah 25:6-7) The telegram concluded with a blessing of joy and peace on the President’s family and the American people. Meanwhile, on Monday, the president of the U.S. Conference of Catholic Bishops has cautioned Obama against reversing current policies on life related matters. Doing so, wrote Cardinal Francis George, could “introduce significant negative and divisive factors into our national life, at a time when we need to come together to address the serious challenges facing our people.” "I expect that some want you to take executive action soon to reverse current policies against government-sponsored destruction of unborn human life," The Chicago Cardinal wrote, "I urge you to consider that this could be a terrible mistake -- morally, politically and in terms of advancing the solidarity and well-being of our nation's people." Monday’s letter comes on the heels of a message from the USCCB, which pledged to work with Obama’s incoming administration. In that letter, Cardinal George outlined some of the key policy concerns for the U.S. Bishops, which included the economic crisis, health care, immigration, international affairs, the defense of marriage; the protection of unborn children. "We offer this outline as an agenda for dialogue and action," wrote Cardinal George "We hope to offer a constructive and principled contribution to national discussion over the values and policies that will shape our nation's future." Concluded the letter: "I renew our expression of hope and our offer of cooperation as you begin this new period of service to our nation in these challenging times. We promise our prayers for you, that the days ahead will be a time of renewal and progress for our nation and that we can work together to defend human life and dignity and build a nation of greater justice and a world at peace." And it’s for these intentions that we too should remember, to join in prayer with the Pope and the U.S. Bishops, and pray for the new President, the new government, and America as a whole. - Photo: Reuters Pictures