PM: Brother André's simple faith made him an 'icon'

MONTREAL--Prime Minister Stephen Harper made the following statement at a reception in Montreal, October 30, after attending a Mass of Thanksgiving at the Olympic Stadium for the canonization of Saint André. 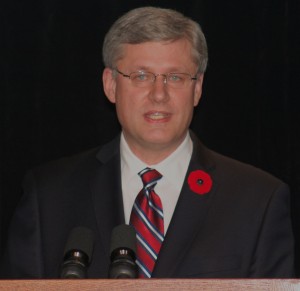 “Your Eminence, Cardinal Turcotte, Archbishop of Montreal; Father Grou, Rector of St. Joseph's Oratory; Your Honour, Mr. Duchesne, Lieutenant Governor of Quebec; Premier Charest; Your Worship Mayor Tremblay; Mr. Circé of Les Caisses Desjardins, and Mr. Savoie of the Knights of Columbus, Ladies and gentlemen. “First of all, I want to thank Your Eminence for inviting me to take part in this wonderful celebration today.  I was truly impressed by the mass honouring Saint André of Montreal, attended by over 50,000 people, including thousands of young people, which would make many rock bands very jealous. “Saint André Bessette would no doubt be a little uncomfortable with all this attention.  But it is well deserved.  This great Eucharistic celebration showcases Canadians' attachment, here in Quebec and throughout the country, to this man of unshakeable faith who devoted his life to the sick and the homeless. “Saint André from Montreal is revered, not only across our country, but around the world.  Pilgrims travel thousands of kilometres to visit, what many would consider one of his biggest accomplishments, the erection of the magnificent St. Joseph's Oratory, which I visited this morning. “The lengthy construction of St. Joseph's Oratory, one of the most visited sites in Canada, symbolizes Saint André's devotion to St. Joseph, and is eloquent testimony to his unwavering determination.  I note that in his youth, he had to leave his family to go earn his living in New England.  But his destiny was to be quite different.  After the birth of Confederation in 1867, he chose to come back home to Canada, to Quebec, here in Montreal.  And that was when he decided to consecrate his life to God.  His return to his home province marked the beginning of a long chapter in his life, which was to be forever engraved in the history of the Roman Catholic Church. “Possessed of a simple faith in the power of God to do far more than men or women ask or imagine, Brother André has become an icon. “Brother André was orphaned at the tender age of 12. He could barely read or write.  But through his faith in God, he managed to accomplish great things.  For some, his life is an example of how faith can move mountains.  For others, he is a source of great inspiration. And for all of us, he is a great man, a great Quebecer, a great Canadian. “Thank you.”