Play on the Curé of Ars tours Ontario and Atlantic Canada

"Do something beautiful for God." 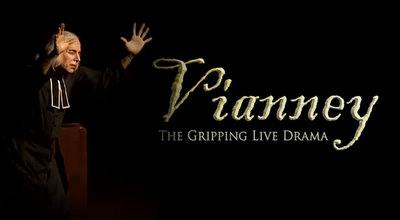 That's the advice that Leonardo Defilippis received from Mother Teresa. The stage actor responded by dedicating his life to bringing the story of saints to the stage and screen through his company Saint Luke Productions. He's told the stories of St. Maximilian Kolbe and St. Francis, as well as the Gospels of Luke and John. He's perhaps most known for the feature film Thérèse, which tells the story of Saint Thérèse of Lisieux. Defilippis' latest project is a one man production focusing on St. John Mary Vianney. Many of our readers will remember that this patron of diocesan priests was front and centre last year in the Church because 1) it was his 150th death anniversary, and 2) we marked the Year for Priests. Defilippis' launched the performance in 2009 and will be bringing it throughout Ontario and Atlantic Canada in the coming days and weeks. He was in Toronto on Tuesday, May 3rd, and spoke with our Jenna Murphy on Perspectives. To learn more about Vianney, and Defilippis' Saint Luke Productions, visit here. You can also see a listing of the performance schedule there as well, with dates scheduled throughout the Toronto and Ottawa areas this week, as well as throughout New Brunswick, in PEI, and Halifax through the end of May.