Planting the Seed of Life - Part 1

Last week I also spoke to Michael Coren on S+L Radio about his new book Why Catholics Are Right. We spoke about all those things that people who really don't know anything about Church always challenge us about. And since then I’ve been thinking a lot about how we need to be able to have certain conversations – about our Faith, about our beliefs, and to have the “Pro-Life” conversation is probably one of the most important ones. But, most of us do not have the facts or the confidence to do so. So, let me tell you about a conversation I recently had with a close friend I grew up with.
"I think that a woman can do whatever she wants with her body", she said to me, quite agitated. (We had been at it for a bit already.) "But, that's not what the issue is," I retorted. 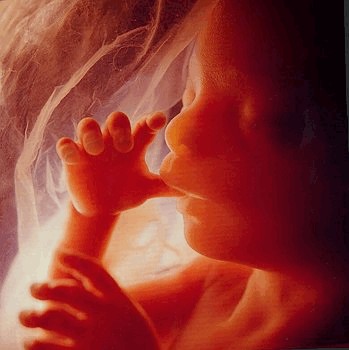 "What's the issue then?" "It's whether the fetus is a human being or not." Ignoring this last comment, she pressed on, "If abortions where illegal, think of all the women who would die trying to get abortions in unsanitary conditions." "That's just completely irrational." Now I was beginning to get agitated myself. "That's like saying we need to make crimes legal so that the people committing them don't get killed or hurt other people." She started to interrupt. But I continued, "It's like saying, 'let's make suicide-bombings legal and safe so that the suicide bomber doesn’t hurt other people.'" "Oh, c'mon!” she yelled, “What does that have to do with anything? Suicide-bombings kill people.” "So do abortions." "A fetus is not a human being." "Ah, so you agree with me, that it's not about choice, but about whether the fetus is a human being or not." She continued as if I had said nothing, "What about women who are raped? Doesn't the Church have any compassion for them?" (This always happens – it always comes around to something about the Church.) I ignored the Church comment and said, "Would you let the woman kill the rapist in revenge?" "No", she said condescendingly without thinking. Then she quickly added, "well, maybe…" Then under her breath, “he should get castrated.” I took my cue, "The law doesn't allow her to kill the rapist, or castrate him, so why should the law permit her to kill her unborn baby, who is nothing but another victim of the crime?" She seemed to be thinking about this, so I continued, "Suppose you make love to your husband on Monday, and then are raped on Tuesday, and then on Wednesday, you find out your are pregnant..." "Ok." She looked at me suspiciously. "So you and your husband decide to continue with the pregnancy just in case the baby belongs to him and not to the rapist." "You could do a DNA test…" "You can, but let's say, for the sake of this argument, that you can't." "Ok." "Ok, so… when the baby is born, nine months later, the first thing they do is take a blood test and find out that the baby is indeed the rapist's. Should the law let you kill the baby then?" "No." "Why not?" "Because it's alive." "And a fetus is not alive?" I asked. "Yes a fetus is alive, but you know what I mean." "That a fetus is not a human being?" "What about that poor woman who was raped? For nine months she has to re-live that ordeal, over and over again, and how is she going to look at that baby when it’s born?" "Have you ever met a woman who was raped and had an abortion?" "No." "Have you ever met a woman who was raped and decided to keep the baby?" "No." "Well, I encourage you to Google some of these stories, because you will find that most women, believe it or not, despite what some pro-abortion people say, are more than capable of carrying a baby to term after a rape and in fact, most of them say that the baby helped them heal from the rape. Most have given up the babies for adoption, but, they say that they are amazed at how out of something so horrible can come something so beautiful.” She was thinking again. I continued, “And do you know how many women who had abortions after being raped say that having the abortion was like being raped again?” She looked away. I don’t think she had thought about this. And I don’t know when to stop, so I continued, “Do you know what the percentage of women having abortions because of rape or incest is?” "No." "Like 2 percent. Most women are not having abortions because they were raped. Do you know what the main reason for women have having abortions is?" "No." "My contraceptive didn’t work or I forgot to take my contraceptive." "You’re just making this up." "If you don’t believe me, go look it up. Why is it that it’s so hard to believe what the pro-life people say, but everyone believes what the pro-abortion people tell them without questioning. You just accept it as fact. There are a lot of lies concerning abortion out there, the least of which is that those poor women have a choice." "I think a woman should be allowed to have an abortion especially in cases of rape or incest.” She had changed her argument. So I said, “Have you ever met someone who was conceived during a rape?” Silence. “Well, I have. And I am not going to tell her that I think she shouldn’t be alive. Would you?” Silence. I continued: “These are real lives here. We’re not just talking about ideas.” She thought for a moment, then, “If she hadn’t been born she wouldn’t know the difference.” "Are you serious?! That’s the dumbest thing I’ve ever heard! So, if I kill you in your sleep it’s ok because you wouldn’t know the difference?" "It’s not the same and you know it." "I think it’s exactly the same: A life is a life." "Look", she said. She was actually trying to be kind with me. "I don't think you should be making people do what you think they should do. If a woman wants to have an abortion, it's her choice. It's her choice to be pregnant or not." To be continued...