Pius XII and Our Lady 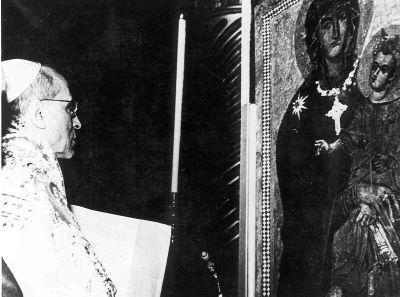 Last year I wrote and produced the documentary film A Hand of Peace: Pope Pius XII and the Holocaust. While it was a privilege to be able to present the historical truth about Pius’ many efforts to save Jews from Nazi aggression I also regretted the many other accomplishments of his papacy that were left on the editing room floor. Our efforts to vindicate the Pope from false accusations of being a Nazi accomplice led us to ignore a vast treasure trove of accomplishments and initiatives during Pius XII’s watershed papacy. I would like to focus on but one of his distinct characteristics: an unwavering devotion to Our Lady. Several decades before the world encountered the pontificate of Pope John Paul II, whose motto was “Totus Tuus” signifying that his entire personhood and papacy was devoted to the Mother of Our Lord, Pius XII graced the world scene with the reputation of a consummate diplomat and as a passionate Marian devotee in his own right. He defined the Dogma of the Assumpution of Mary into heaven, declared a Marian Year from 1953 to 1954 to commemorate the centenary of the definition of the Dogma of the Immaculate Conception, established the feasts of Mary's Queenship and the Immaculate Heart of Mary, and canonized three saints linked with Marian devotion: St. Catherine Laboure, St. Louis Marie Montfort and St. Anthony Mary Claret. In 1944 Pius XII instituted the feast of the Immaculate Heart of Mary to be celebrated each year on August 22nd. He further decreed the memorial of the Immaculate Heart of Mary, to be for the whole Church a way to obtain Mary's intercession for "peace among nations, freedom for the Church, the conversion of sinners, the love of purity and the practice of virtue." In 1969, Pope Paul VI moved the feast of the Immaculate Heart of Mary to the Saturday immediately after the Solemnity of the Sacred Heart of Jesus. In turn, Paul VI moved the Queenship of Mary to August 22nd. Pius the XII had instituted that feast day in his 1954 encyclical Ad Caeli Reginam and it's the feast we celebrate this Saturday. Pius XII's enyclical begins:

From the earliest ages of the Catholic church a Christian people, whether in time of triumph or more especially in time of crisis, has addressed prayers of petition and hymns of praise and veneration to the Queen of Heaven. And never has that hope wavered which they placed in the Mother of the Divine King, Jesus Christ; nor has that faith ever failed by which we are taught that Mary, the Virgin Mother of God, reigns with a mother's solicitude over the entire world, just as she is crowned in heavenly blessedness with the glory of a Queen.

With seven major wars taking place around the world, numerous other insurgencies and local conflicts, economic unrest, and countless injustices it is even more imperative that we turn to Our Lady on these days with petitions of peace, pleas for brotherhood and equality, and supplications for those who are suffering.