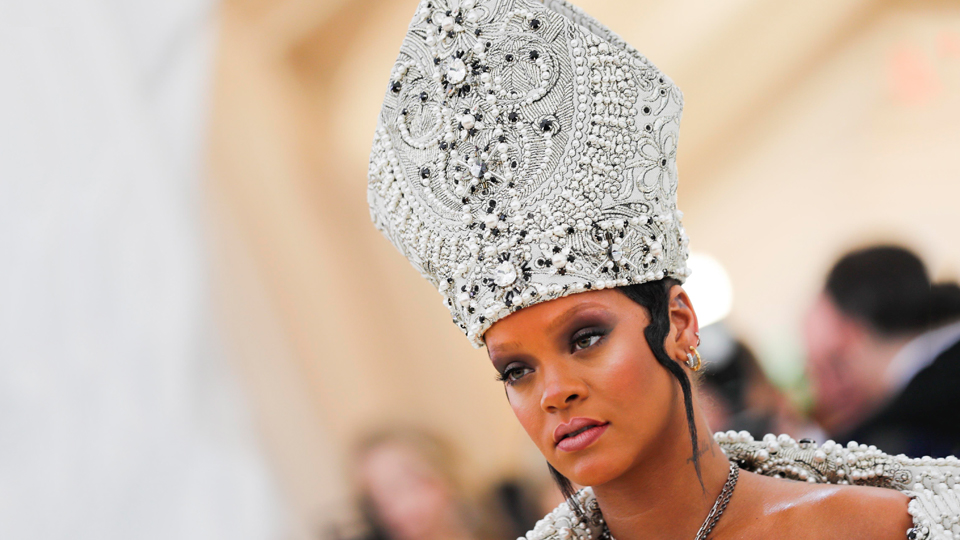 CNS photo/Carlo Allegri, Reuters
Phyllis Zagano on the Met "Catholic" exhibit
While it's always important to consider the other person's point of view, get ready for strong emotions if you visit the "Heavenly Bodies: Fashion and the Catholic Imagination" exhibit at New York's Metropolitan Museum of Art. It's about as "other" as you can get. You may have seen the photos of various glitterati attending the "Met Gala" -- the dress code was "Sunday Best." They included actress Sarah Jessica Parker (formerly of TV's "Sex in the City," now starring in "Divorce") modeling a gold lamé dress and wearing a Nativity scene on her head. The singer Rihanna (her songs include "S&M" and "Love the Way You Lie") appeared as a mini-skirted rhinestone pope. Other women-in-the-news were on the red carpet, wearing creations by everyone from Balenciaga to Versace. A production of the Met's Costume Institute three years in the making, the exhibit supplements "Women's Cultures: Equality and Difference," the Pontifical Council for Culture's 2015 attempt to find out about the feminine "other." Remember the council's webpage (since changed) with a photo of Man Ray's 1936 bondage sculpture "Venus Restored"? The council helped the Costume Institute get church vestments and objects. To my mind, there are many circles of "otherness" here. To begin with, all the costume models, live at the gala and in plaster in the museum, are female. The Catholic vestments are the real deal; the Vatican lent some 40 pieces from the Sistine Chapel sacristy. So, everything sacred was male and everything profane was female. Not that every dress is positively awful, but their juxtaposition with pieces of sacred art throughout the museum jars the sensibilities and raises the defenses of Christians. Why? Perhaps because, every so often, the curators demonstrate their abject lack of knowledge about Christian and Catholic symbolism. For example, in a video clip curator Andrew Bolton calls a cross a crucifix. And whoever wrote that papal garments are white for purity obviously never heard of the Dominican pope, Pius V. Furthermore, who, when describing the “Dressed Madonna," wrote that Mary the Mother of Jesus "was worshipped as the Bride of Christ"? Mistakes like these offend educated Catholics, but there is more: the bondage mask hung with crucifixes; the groaning horror-film background music filling the Met's Great Hall; the stylized habits and clerical garb on female mannequins lined up like so many extras in "The Handmaid's Tale." Who is the "other"? In all charity, I would like to see the exhibition as an example of something, but I am not quite sure of what. The Met says the designers were influenced by Catholic themes and art, by the "Catholic Imagination." (The Met says it took the term from the late sociologist Fr. Andrew Greeley, whom it calls a theologian.) Well, it is one thing to lift a design and quite another to desecrate an image. I want to believe that no one involved intended to offend. But it seems everyone involved managed to do just that. Even an ostensibly Catholic gala attendee, the comedian Stephen Colbert, got into the act. On his television program recently, he passed two off-color "Catholic" remarks — one about birth control and another on masturbation — in a segment about the papal garments and accessories. He made these "jokes" about a papal cope and crosier, two exquisite examples of sacred art that have been and may in the future be ritually used. There are many places to draw the line in this entire event. First, the subtle and not-so-subtle images of female belittlement are reflected in the courtly splendor of the papal bling. Women are both objects and objectified; males are dominant and domineering. Second, the gala and the exhibits magnify the sharp divide between rich and poor, between the in-crowd and the standers-by. Third, the museum itself is putting Christianity on the shelf. This last point is underscored by the morphing of the sacred to the profane. Consider the gradual elimination of museum postcards of sacred art. They have gradually sold out and were not replaced. Up at the Cloisters, the Met exhibits a 12th-century reliquary cross that still has relics in it. Now the Met Store is selling a Reliquary Cross Unisex Bomber Jacket ($148). Then there is the "Brother Sun, Sister Moon" Rock Crystal Rosary Necklace ($525). And there’s more. I want to see all this from the others' points of view. I want to say they mean no harm, even as they are caught up in passing avant-garde taste. I want to say they are mired in pseudo-intellectualism. I want to say they are simply insensitive, or naive, or uneducated. But I also want to encourage the rest, those who are offended by the denigration of women and the apparent dismissal of the sacred, not to cave in to this latest hijacking of religion. You are right to be offended. It is OK to say the whole thing is upsetting, even tacky. Because it is.

Phyllis Zagano is senior research associate-in-residence at Hofstra University in Hempstead, New York. Her books include Women Deacons: Past, Present, Future and Holy Saturday: An Argument for the Restoration of the Female Diaconate in the Catholic Church.