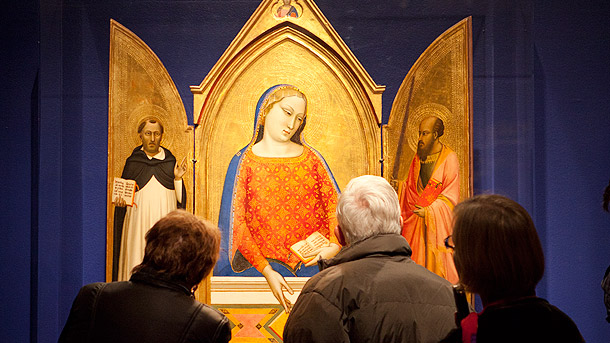 Michelangelo, arguably one of the greatest living artists of his time, is the quintessential Italian Renaissance artist. He was a sculptor, painter, architect, poet, and engineer who exerted an unparalleled influence on the development of Western art. But what about those lesser-known artists such as Bernardo Daddi or say, Pacino di Bonaguida? What were the advancements that they made that paved the way for someone like Michaelangelo? I recently attended the Art Gallery's of Ontario's exhibit Revealing the Early Renaissance: Stories and Secrets in Florentine Art. There, I was able to learn about the conditions that led to the creation of artist's workshops, the techniques they used to create their masterpieces and also see how their move to depict stories from the New Testament and the saints' lives radically changed the way Westerners would depict religious imagery in the future.
Over the next couple of weeks, I'll share some of my favourite pieces from the exhibit. But, seriously, don't just take my word for it. I suggest that you carve out an afternoon in the coming weeks, and go see these masterpieces for yourself. Many of these works have never traveled before and will likely not travel again - so this really is a chance of a lifetime! Without further ado, I present the first piece that I fell in love with: Bernardo Daddi's The Virgin Mary with Saints Thomas Aquinas and Paul produced around 1335. This piece on loan from The J. Paul Getty Museum, Los Angeles, is very interesting. If you look closely, you can see Mary's hand reach beyond the frame of the icon. It is as if she's reaching out beyond the realm of Heaven and calling us toward her. This attempt to break outside of the physical confines of the frame helps the viewer to connect with Mary. Its almost as if you could reach out and touch her hand! Below, I've included a description provided by the Art Gallery of Ontario.

This triptych, a work containing three panels, probably adorned an altar in a small chapel. The hinged doors could be closed when the altarpiece was not being used for devotional purposes. The central panel shows the Virgin Mary gesturing beyond a parapet. Her realistically depicted hand is reaching into the earthly realm of the viewer. The nearby manuscript fragments were executed by Maestro Daddesco, whose real name is unknown. Scholars named him Daddesco because they thought his work was influenced by the style of fellow Florentine artist Bernardo Daddi. More recently, Maestro Daddesco has been accepted as a master in his own right and even as a predecessor of Daddi. Art Gallery of Ontario