A couple of weeks ago I went back to camp.
I was reminded of my first job in Canada: I was a counsellor at Camp Wahanowin in Orillia. Camp Wahanowin is a Jewish camp and before every meal we used to say the blessing of the bread: Barukh attah Adonai eloheinu melekh ha-olam, ha-motzi lechem min ha-aretz. That was some of the first Hebrew I learned. The reason why I was reminded of Camp Wahanowin was not because it was camp, but because this camp that I just participated in is a camp that brings Jews, Muslims and Christians from Israel and Palestine together with Jews, Muslims and Christians in Canada – and all the kids are 11/12-years-old. 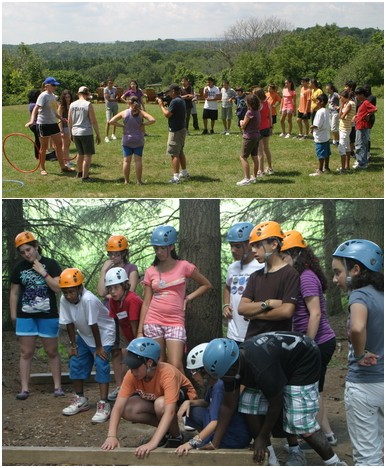 Kids4Peace was founded by the Episcopal (Anglican) Church of Jerusalem, at St. George’s College, when, during the last intifada, the college was empty. The administration decided to use their time and space to bring whole families together: Jews, Muslims and Christians, so that they would get to know each other. In Israel, even though there are “mixed” cities and towns, there aren’t many opportunities for Jews to meet Arabs. I was reminded of another experience. When I was 16, I had the wonderful opportunity to come to Canada to attend Lester. B. Pearson College of the Pacific, a school that promotes peace and international understanding by bringing young people from around the world together. It was our Nobel Peace Laureate Prime Minister Lester B. Pearson who said “how can there be peace in the world if people don’t understand each other? And how can this be if they don’t know each other?” It’s a simple formula: bring young people from different countries together so they can live, study and work together, make friends and when they grow up, they won’t have silly prejudices, but can help bring peace to the world. And I believe it works. There were 200 students, ages 16-19, living together for two years – learning about each other, getting to know about each other. Politics and international affairs for us would never be the same. We had students from Ireland and from Northern Ireland; Pakistanis and Indians, refugee students from Iran, Iraq and Ethiopia; South Africans and Swazis, Latin Americans, Europeans, Africans, Asians and yes, Israelis and Palestinians. I remember countless nights that I stayed up listening to the Israelis and the Palestinians talking – they all spoke both Hebrew and Arabic – and they didn’t always agree, but they had a forum where they could speak and be friends. More importantly, they could get to know each other and see that we are all more alike than different. Jews and Arabs are the same and even in the differences... sometimes it’s those differences that bring us closer together. Several years later I became involved with another organization: the Children’s International Summer Villages. The goal of CISV is to promote cross-cultural understanding by bringing young people together through camps and interchanges. CISV has existed for over 60 years and every Summer there are hundreds of programs worldwide. They start with Villages for 11-year-olds, because at that age, kids are still quite impressionable and they haven’t quite formed prejudices and biases. Sometimes the kids don’t even speak the same language, but no matter – you don’t need to speak the same language to kick a soccer ball around. And at Kids4Peace, there was a lot of soccer ball kicking. Twelve kids came from the Galilee: four Jews, four Muslims and four Christians. The program is a faith-based program and so the goal is specifically for the kids to learn about each other’s faiths, so they travelled with three adults: A Muslim advisor, a Christian advisor and a Jewish advisor. The camp director, Fr. Samuel Barhoum, also travelled from Palestine. They were welcomed here by 12 Canadians, also a mix of Christians, Jews and Muslims. They spent 10 days at Cedar Glenn YMCA Camp north of Toronto learning about each other, playing games, participating in cooperative and team-building activities, learning about the three Abrahamic faiths and playing soccer. Part of the program included a trip to a Mosque, a Synagogue and a Catholic Church, for prayer services and Mass, a trip to Niagara Falls and the CN Tower. Israel is a land in desperate need for peace, but how can there be peace if Jews and Arabs don’t get to know each other? How can there be peace if people continue to hold onto silly prejudices? Now, in its fifth year, Kids4Peace has allowed sixty kids to have the opportunity to break that cycle – and through the kids, their families too. And sixty Canadian kids are part of the movement too. Kids4Peace is a wonderful initiative that was completely free to the participants. In Toronto there are a group of directors who tirelessly raise the funds necessary for this experience to happen. And they are always looking for kids – if your son or daughter is going to be eleven next Summer, check out www.kids4peace.ca and find out how you can participate – but they need Jewish and Muslim kids too, so pass it on to your Muslim and Jewish friends. And to inspire you, you can also visit our facebook page to see some of the photos from the camp. Be sure to tune in on Friday, September 9th, for an all-new Perspectives: The Weekly Edition, as we ask the question, what would you do to bring about peace? I speak with Fr. Samuel Barhoum and his wife Susan -- two Christians living in the Galilee. They share their own experience of living in Israel and helping bring about peace. And keep your eyes and ears open for a new documentary, Abraham’s Tent, which tells the story of this wonderful camp experience, coming in soon (you don’t think I was just at the camp having fun, do you?)