Let’s face it: sex is sometimes a divisive issue both in and outside the Roman Catholic Church. And I’m not talking about the conjugal act (that’s a whole different issue in its entirety).While God created us as men and women, the full human being made in God’s likeness isn’t limited to what’s between a person’s legs, as we all know. That being said, our physical differences are realities that lead us to contemplate the underlying spiritual components of true masculinity and femininity. 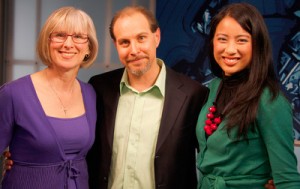 Our guests this week are Sharon van der Sloot from ENDOW Ministries (Educating on the Nature and Dignity Of Women), and interior creative consultant Lisa Canning. Both are strong, successful women who are also mothers. And both have something to say about living an authentic spirituality as women. Lisa is quick to admit she knows a lot of women who consider themselves feminists and who take equality to mean being exactly like men. An example of this type of thinking can be seen in the illicitly “ordained” women priests who insist on this radical form of equality. But that notion of equality is a bit misguided, as our host Pedro Guevara Mann and our guests make clear, pointing to Pope John Paul II’s 1988 apostolic letter, Mulieris Dignitatem, which points to a spiritual equality, not a physical/occupational one:

16. Everything that has been said so far about Christ's attitude to women confirms and clarifies, in the Holy Spirit, the truth about the equality of man and woman. One must speak of an essential "equality", since both of them - the woman as much as the man - are created in the image and likeness of God. Both of them are equally capable of receiving the outpouring of divine truth and love in the Holy Spirit. Both receive his salvific and sanctifying "visits.”

The letter goes on to discuss the important contributions of women in the early church, from St. Mary Magdalene acting as Apostle to the Apostles, to the conversion of St. Augustine of Hippo, which was caused partly by the prayers and support of his mother, St. Monica. Everyone acknowledged both men and women are equally called to imitate Christ in self-giving, love and holiness. But it was difficult to articulate what it means to be a spiritual mother as a man, woman, priest, religious sister, etc. That’s not to say men and women should have distinct spiritual “gender roles,” and that boys should only play with trucks while girls should only like horses as the cliché would have it. There’s certainly a blurring of these lines. What it comes down to in the end is complementarity, how men and women are different, but perfect for each other. And just as a married couple is meant to cleave to one another and become one, so must a religious sister become one with her bridegroom, Christ, and a priest must become one with his bride, the Church. What do you think? Are there genuine differences in how men and women are called to express their spiritual sides? Tune in tonight at 7pm or 11pm ET/8pm PT, or Sunday March 21st at the same times, for our featured conversation with our guests as they grapple with this question. As always, keep checking the S+L Facebook page where we always make sure to keep you in the loop.