Peace on earth!...but not in the Catholic Church 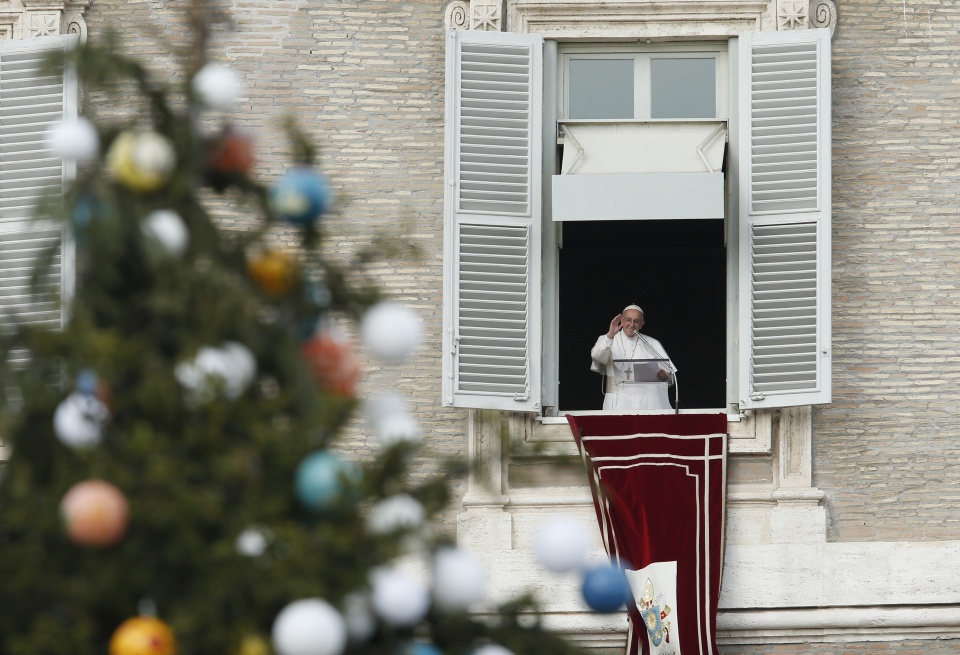 Advent is a time of expectation and preparation for the Prince of Peace. But 2017 has not been a year of peace inside the Catholic Church. Backlash to Francis' leadership and teachings from a boisterous Catholic constituency is raising questions about church unity. How should Catholics respond?

One of my favorite Christmas shows is the 1966 TV cartoon adaptation of Dr. Seuss’ “How the Grinch Stole Christmas.” It’s a staple of the season for me, and it never fails to warm my heart and put a smile on my face. Last week I heard the famous—or infamous—soundtrack on the radio… You're a mean one, Mr. Grinch You really are a heel, You're as cuddly as a cactus, You're as charming as an eel, Mr. Grinch, You're a bad banana with a greasy black peel! I just burst out laughing. What horrible things to say about a person, even the Grinch! I laughed again. Dr. Seuss certainly had a way with words. Around the same time I began writing the script for our year-in-review show for 2017, which will premiere on Saturday, December 30 at 8pm ET. While looking back through the headlines it dawned on me that we would have to include a rather discomforting story: the war against Pope Francis. (This phrase comes from an October article in The Guardian, a secular paper.) More than the previous four years, 2017 witnessed Catholics - who strongly oppose or support Francis - singing the Grinch song about one another in public. It’s not a good trend. From the beginning of this pontificate there has been a degree of discomfort and ideology-driven resistance from some Catholics. But there was a general and sincere willingness in the early years, for the most part, to give Francis the benefit of the doubt. They were quick to tell more exuberant Catholics, “Just watch, the honeymoon will be over soon.” In some ways the honeymoon is over, but in many ways it isn’t. The novelty of Francis has definitely worn off, but he continues down a path of reform with extraordinary courage and determination. He’ll be 81 in a week, but it hasn’t slowed him down. I remember visiting with the late Cardinal Loris Capovilla —secretary to Pope John XXIII—back in 2014 and joking with him at 99 years old about how free-spoken he was! I don’t think it’s reasonable to expect Francis to trend toward restraint with age. Approaching the five-year mark, those who originally expressed caution privately, now express disagreement publicly. The most flagrant example came in the form of a “filial correction” from a group of priests and theologians in September of this year, who called on Francis to denounce the heresies they allege he has propagated. It sounds like the stuff of a Netflix drama. That letter received over ten thousand more signatures in less than a month. In response, a group of clergy and scholars supportive of Francis issued a counter-petition garnering more than sixty thousand signatures, the last time I checked. They thanked Francis for his “courageous and theologically sound papal leadership.” This is just the latest in a series of increasingly severe and public tit-for-tats over Francis’ leadership and teachings the past few years. Some of the presumptions being made about others, and the language used to attack others is really disturbing…and these are Christians. It’s starting to feel like the church is in a ecclesial cold war. You're a monster, Mister Grinch, Your heart's an empty hole, Your brain is full of spiders, You have garlic in your soul, I wouldn't touch you with a thirty-nine & a half foot pole! Our sources close to Francis tell us the Pope is very peaceful. He is concerned about the nastiness surfacing from within the ranks, but he is determined to move forward down the path Vatican II charted. That path has led him beyond the walls of the church to encounter the world. He doesn’t travel any more than his recent predecessors did, but where he chooses to go and what he chooses to talk about have consequence because of his unique moral credibility and proactive approach to dialogue. The world today needs Francis to be Francis. His recent visits to Myanmar and Bangladesh are a good example. No one else could have done what he did there. The real story was not the “R” word controversy, but his encounters with other religious leaders where he spoke of unity. As I followed the events, I felt Francis could have been speaking to his fellow Catholics… In Myanmar to the Supreme Sangha Council of Buddhist Monks:

In Bangladesh at the ecumenical and interreligious meeting for peace:

“It is a particularly gratifying sign of our times that believers and all people of good will feel increasingly called to cooperate in shaping a culture of encounter, dialogue and cooperation in the service of our human family.  This entails more than mere tolerance.  It challenges us to reach out to others in mutual trust and understanding, and so to build a unity that sees diversity not as a threat, but as a potential source of enrichment and growth.  It challenges us to cultivate an openness of heart that views others as an avenue, not a barrier.” 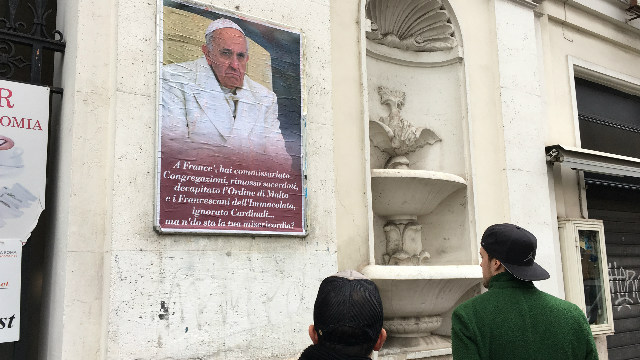 (CNS Photo: A poster expressing criticism of Pope Francis is seen in Rome Feb. 5, 2017. Several copies of the poster were anonymously placed in the center of the city) The principles of which Francis spoke during these meetings—unity, openness of heart, and mutual trust—should be shared regularly from the pulpits of Catholic parishes. Catholic parishes are a unique place. They are not typical of any of the other world religions’ worshiping spaces. I learned this at the Synod of Bishops on the New Evangelization in 2012. I was expecting new, big, and exciting things to emerge. Needless to say, I was a bit perplexed as bishop after bishop spoke of the need to reinforce boring-old parish life as the primary point of encounter with Jesus and his church. That seemed counter-intuitive to me. To be honest, if a friend of mine was searching, I don’t think I would take them to my parish! But the interventions of the bishops got me thinking: “Why the parish? Why not a new movement? Why not a faith group where people socialize and worship together? What is so important about the parish?" And then it finally hit me. A parish community is totally counter-cultural in this regard: it is one of the last spaces in our church and in our society where everyone is present. And I mean everyone. On Sunday I can sing, pray, and exchange the sign of peace with someone who holds very different political and theological positions. Outside the parish we might never have that encounter. As impressive as some of the new ecclesial movements, faith-based groups, and university chaplaincies may be, they tend to draw people of the same outlook. That’s why the parishes can be a unique place to reconcile our internal Catholic disputes. They are natural spaces for sorely needed opportunities for encounter. I’ve seen it. I’ve witnessed such encounters open people to new and different perspectives. The vicious debate over the direction Francis is leading the church is very serious, and Catholics need to respond in a constructive manner. An analogy might help. One of the central tenets of Catholicism is the primacy of the poor. Francis has famously called for “a church of and for the poor.” (Evangelii Gaudium 198) He says that the Gospel and tradition of the church are so clear on this point, “that no ecclesial interpretation has the right to relativize it.” (EG 194) And therefore, “No one must say that they cannot be close to the poor because their own lifestyle demands more attention to other areas.” (EG 201) “They have much to teach us. Not only do they share in the sensus fidei, but in their difficulties they know the suffering Christ. We need to let ourselves be evangelized by them.” (EG 198) Today something akin to the preferential option for the poor should be adopted for inter-Catholic dialogue and encounter. Catholic unity has to be understood as so fundamental to the faith, “that no ecclesial interpretation has the right to relativize it.” No Catholic must say that they cannot be close to a fellow Catholic who disagrees with them. They have much to teach us. Jesus’ final plea that his followers “may all be one” isn’t just applicable in ecumenical circles. (Jn 17:21) You nauseate me, Mister Grinch, Your soul is an appalling dump heap overflowing with the most disgraceful assortment of rubbish imaginable mangled up in tangled up knots! There never was anyone as terrible as the Grinch. But the moral of the story is a pertinent one for Catholics during Advent this year: that even a nasty wasty skunk, with a heart full of unwashed socks, and a soul full of gunk, can be redeemed. The beautiful thing about the Catholic Church is its unity in diversity. We should embrace it. That’s the message Francis preaches to the other faiths because it’s the message on which his faith is built. We should keep in mind that the more divided the Catholic Church is, the less influential it will be in the world. In the debate over Communion for the divorced and remarried, and other appropriate pastoral practices, unity is non-negotiable. To threaten the unity of the Catholic Church over a theological or political question is perilous. But if the question is really a matter of protecting the magisterium, the deposit of faith and the integrity of church law, we can be very grateful that the Lord has anticipated our fears and is way ahead of us:

“The Roman Pontiff, as the successor of Peter, is the perpetual and visible principle and foundation of unity of both the bishops and of the faithful…. The pope's power of primacy over all, both pastors and faithful, remains whole and intact. In virtue of his office, that is as Vicar of Christ and pastor of the whole Church, the Roman Pontiff has full, supreme and universal power over the Church. And he is always free to exercise this power. For our Lord placed Simon alone as the rock and the bearer of the keys of the Church, and made him shepherd of the whole flock.” (Lumen Gentium 22, 23)