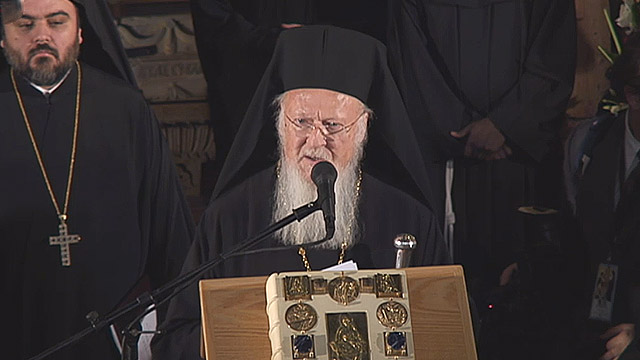 Holy Sepulchre, May 25, 2014
“Do not be afraid; for I know that you seek Jesus who was crucified. He is not here; for he has risen, as He said. Come, see the place where the Lord lay.” (Matt. 28.5-6)
Your Holiness and dearly beloved brother in Christ,
Your Beatitude Patriarch of the Holy City of Jerusalem, much loved brother and concelebrant in the Lord,
Your Eminences, Your Excellencies, and very reverend representatives of the Christian churches and confessions,
Esteemed brothers and sisters,
It is with awe, emotion and respect that we stand before “the place where the Lord lay,” the life-giving tomb from which life emerged. And we offer glory to the all-merciful God, who rendered us, His unworthy servants, worthy of this supreme blessing to become pilgrims in the place where the mystery of the world’s salvation transpired. “How awesome is this place! This is none other than the house of God, and this is the gate of heaven.” (Gen. 28.17)
We have come as the myrrh-bearing women, on the first day of the week, “to see the sepulchre” (Matt. 28.1), and we too, like they, hear the angelic exhortation: “Do not be afraid.” Remove from your hearts every fear; do not hesitate; do not despair. This Tomb radiates messages of courage, hope and life.
The first and greatest message from this empty Sepulchre is that death, “this last enemy” of ours (see 1 Cor. 15.26), the source of all fears and passions, has been conquered; it no longer holds the final word in our life. It has been overcome by love, by Him, who voluntarily accepted to endure death for the sake of others. Every death for the sake of love, for the sake of another, is transformed into life, true life. “Christ is risen from the dead, by death trampling down death, and to those in the tombs He has granted life.”
Do not, then, be afraid of death; but do not also be afraid of evil, despite any form that this might assume in our life. The Cross of Christ amassed all the arrows of evil: hatred, violence, injustice, pain, humiliation – everything that is suffered by the poor, the vulnerable, the oppressed, the exploited, the marginalized and the disgraced in our world. However, rest assured – all of you who are crucified in this life – that, just as in the case of Christ, the Resurrection follows the cross; that hatred, violence and injustice have no prospect; and that the future belongs to justice, love and life. Therefore, you should work toward this end with all the resources that you have in love, faith and patience.
Nonetheless, there is another message that emanates from this venerable Tomb, before which we stand at this moment. This is the message that history cannot be programmed; that the ultimate word in history does not belong to man, but to God. In vain did the guards of secular power watch over this Tomb. In vain did they place a very large stone against the door of the Tomb, so that none could roll it away. In vain are the long-term strategies of the world’s powerful – everything is eventually contingent upon the judgment and will of God. Every effort of contemporary humanity to shape its future alone and without God constitutes vain conceit.
Lastly, this sacred Tomb invites us to shed another fear that is perhaps the most prevalent in our modern age: namely, fear of the other, fear of the different, fear of the adherent of another faith, another religion, or another confession. Racial and all other forms of discrimination are still widespread in many of our contemporary societies; what is worst is that they frequently even permeate the religious life of people. Religious fanaticism already threatens peace in many regions of the globe, where the very gift of life is sacrificed on the altar of religious hatred. In the face of such conditions, the message of the life-giving Tomb is urgent and clear: love the other, the different other, the followers of other faiths and other confessions. Love them as your brothers and sisters. Hatred leads to death, while love “casts out fear” (1 John 4.18) and leads to life.
Your Holiness,
Dear brother and sisters,
Fifty years ago, two great church leaders, the late Pope Paul VI and Ecumenical Patriarch Athenagoras, cast out fear; they cast away from themselves the fear which had prevailed for a millennium, a fear which had kept the two ancient Churches, of the West and East, at a distance from one another, sometimes even setting them up against each other. Instead, as they stood before this sacred space, they exchanged fear with love. And so here we are with His Holiness Pope Francis, as their successors, following in their footsteps and honoring their heroic initiative. We have exchanged an embrace of love, even as we continue along the path toward full communion with one another in love and truth (Eph. 4.15) in order “that the world may believe” (John 17.21) that no other way leads to life except the way of love, reconciliation, genuine peace and fidelity to the Truth.
This is the way that all Christians are called to follow in their relations among themselves – whatever church or confession they belong to – thereby providing an example for the rest of the world. The way may be long and arduous; indeed, to some it may occasionally seem like an impasse. However, it is the only way that leads to the fulfilment of the Lord’s will “that [His disciples] may be one.” (John 17.21) It is this divine will that opened the way traveled by the leader of our faith, our Lord Jesus Christ, who was crucified and resurrected in this holy place. To Him belong glory and might, together with the Father and the Holy Spirit, to the ages of ages. Amen.