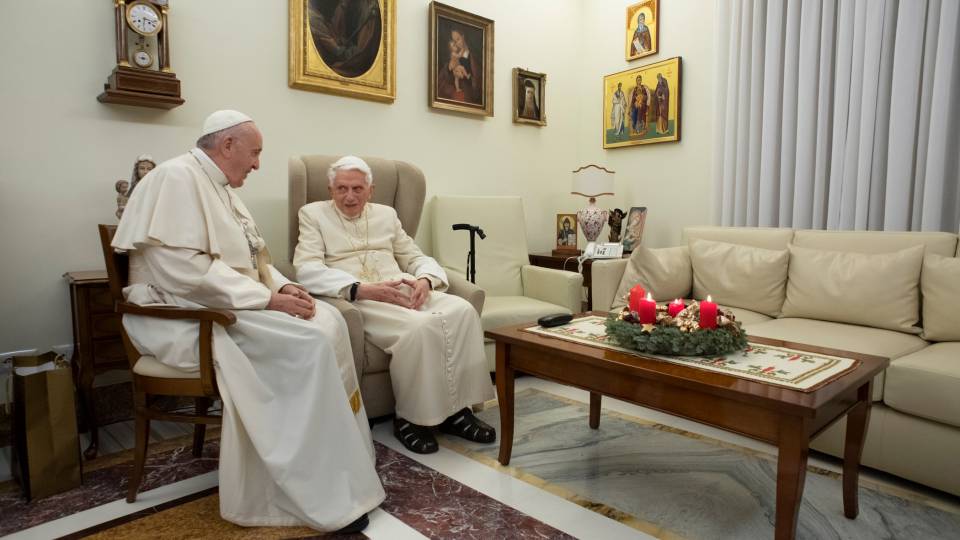 Pope Francis pays a pre-Christmas visit to Pope Emeritus Benedict XVI in 2018 (CNS photo/Vatican Media)
You may have heard the Italian adage, “after a fat pope a skinny pope.” It was invoked when Pope Francis was elected in 2013 to characterize the evident shift that had taken place: “after a theologian (Benedict) a pastor (Francis).” This past week the English-speaking world learned that Pope Benedict, upon his election in 2005, had offered Cardinal Bergoglio (the future Pope Francis) the position of Secretary of State at the Vatican, but that Bergoglio had turned it down. Typically ironic of this kind of Vatican insider information, it did not come from an official Vatican source. It came from an Argentine priest who knew Bergoglio in Buenos Aires. Still, the testimony carries weight for a couple of reasons: First, it is widely known that Bergoglio was himself a leading candidate in the 2005 conclave, so it makes sense that Benedict, having just been elected and seeking to preserve unity, would try to appoint the runner-up to an influential Vatican position. Second, Francis has proven himself over the past six and a half years to be an astute administrator. Granted, the reform of the Vatican bureaucracy has taken more time than he initially predicted, but his bold vision and implementation of institutional reform through conversion has been utterly consistent and is bearing fruit. And, truth be told, six and a half years is not a long time at the Vatican. I don’t think anyone could disagree that Francis has already achieved more in terms of substantive reform than any pope in the post-Vatican II period. He’s also incredibly street smart. An informative example was his response (or rather, non-response) to Archbishop Carlo Maria Viganò after the former Nuncio to the United States accused Francis of ignoring sanctions against Theodore McCarrick for his abusive actions. When he was asked about the allegations in a press conference on board a return flight from Ireland in 2018, Francis simply said, “Read it yourselves carefully and make your own judgment. I will not say a single word on this.” In the subsequent weeks and months, those very journalists found several contradictions and misinformation in the archbishop’s testimony, although an internal Vatican investigation is still ongoing. (One of those journalists, Chris Lamb of The Tablet, wrote an excellent assessment of the pope’s strategy of silence.) The point is: Francis is a shrewd and determined leader. So, it makes a lot of sense that Benedict would try to tap Bergoglio for a position like Secretary of State. And it confirms, yet again, what many Catholic commentators have realized over the course of Francis’ papacy: he is the total package. For a pope, what comprises the “total package”? This is debatable, but I’ve narrowed it down to three attributes: pastor, theologian, and administrator. Of course, faith, hope, and charity are the marks of a good Christian, but a pope can personally excel in the great theological virtues and not be an effective pope for his time. I briefly mentioned Francis’ administrative qualities, so let’s consider the other two: Pastor: This is what has defined Francis from day one. He is a pastor the way a good parish priest is a pastor: grounded, close to ordinary people, aware of their daily challenges, compassionate and supportive, non-judgemental. He prioritizes listening, and when he does speak it is comprehendible and applicable. A good summary of his pastoral sensibility can be found in chapter eight of Amoris Laetitia in a section called, “The Logic of Pastoral Mercy”:

I understand those who prefer a more rigorous pastoral care which leaves no room for confusion. But I sincerely believe that Jesus wants a Church attentive to the goodness which the Holy Spirit sows in the midst of human weakness, a Mother who, while clearly expressing her objective teaching, “always does what good she can, even if in the process, her shoes get soiled by the mud of the street”. (308)

Theologian: From the start of his papacy, Francis’ pastoral sensibilities and simple way of communicating created the perception that he was not a “theologian” in the manner of Pope Benedict. This is true to the degree that Benedict preferred a studious solitude to an interaction with a vivacious crowd in the streets. But in reality, the zero-sum pastor-versus-theologian paradigm doesn’t apply. Francis’ theological contribution has been enormous, and perhaps most revealing in his 2015 ecology encyclical Laudato Si’. It’s not the classical poetic diction of Benedict, but its pointedness and depth will stimulate even the greatest theological minds for decades to come. One section worth mentioning (and there are many) is Francis’ analysis of the complex and faceless structure undergirding our ecological crisis which he calls “The Globalization of the Technocratic Paradigm” (106-114). (For further reading on Francis’ theological competence I recommend The Mind of Pope Francis: Jorge Mario Bergoglio’s Intellectual Journey by Massimo Borghesi.) Pastor, theologian, administrator. These attributes are common enough among the Catholic hierarchy today: there are priests and bishops who are very pastoral, or theologically astute, and some are capable administrators. But it’s rare to find all three in one man. And that is really what makes Pope Francis stand out. On top of that, he has managed to integrate these attributes to drive forward his ecclesial vision. It is no accident that his reform of the Vatican bureaucracy is grounded in the perceptive pastoral sensibility that real change will only happen through conversion. Neither is it an accident that that same pastoral sensibility is based entirely on the theological principle that “realities are greater than ideas”. This does not mean he is perfect (he’s admitted mistakes openly) or that Catholics should turn him into a superhero for ideological reasons. I’ve fought this temptation in myself, as a filmmaker of two documentaries on his papacy and a journalist who writes frequently in support of his ecclesial vision. Ultimately, I add my professional voice in support of Francis because he’s a good man the world needs, and I know the forces he’s up against. Needless to say, if I were choosing the Secretary of State, or hiring a professor of theology, or appointing a new parish priest, Bergoglio would be on my short list.