Papal Prayer Intentions for the Month of November 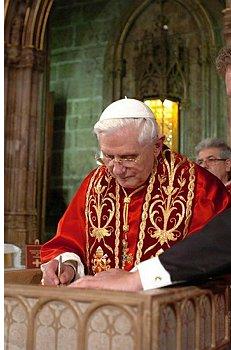 As we enter November, let's consider the Papal Prayer Intentions.
Pope Benedict's mission intention for November is: "That in the Korean peninsula the spirit of reconciliation and peace may grow." His general prayer intention is: "That those dedicated to medical research and all those engaged in legislative activity may always have deep respect for human life, from its beginning to its natural conclusion." Pope Benedict recently commented on medical research to a group gathered in Rome for the 25th International Congress of Catholic Pharmacists. The Vatican Information Service reported the Holy Father's words:

"... no individual may be used ... as an object to undertake therapeutic experiments." Such experiments "must be carried out following protocols that respect fundamental ethical norms." ... "all attempts at cure or experimentation must be undertaken while bearing in mind the wellbeing of the person concerned, and not only the pursuit of scientific progress." Furthermore, "the quest for the good of humanity cannot proceed at the expense of the wellbeing of the people being treated."

Pope Benedict also suggested pharmacists not "anesthetize [their] consciences" when it comes to certain drugs that may cause abortion or euthanasia. He also defended pharmacists' right of conscientious objection, particularly when situations arise that may deal with products that directly or indirectly contribute to abortion, euthanasia, or other "immoral purposes." The Pope concluded saying:

"The biomedical sciences are at the service of man ... Were it otherwise they would be cold and inhuman. All scientific knowledge in the field of healthcare ... is at the service of sick human beings, considered in their entirety, who must have an active role in their cure and whose autonomy must be respected."