Papal Politics and the Concept of Dialogue 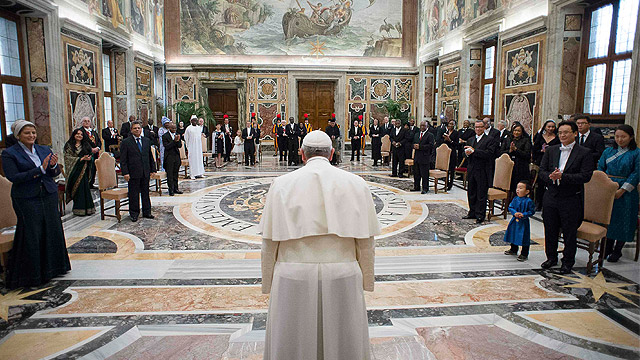 Over the weekend, Pope Francis addressed the Pontifical Institute of Arabic and Islamic Studies. Speaking on the occasion of its 50th anniversary, the Holy Father focused on the concept of dialogue, lauding the academy for their work in furthering Christian-Islamic relations. He told them “the most effective antidote against all forms of violence is education towards the discovery and acceptance of differences.” In other words, dialogue. Dialogue has been at the heart of so much of what Pope Francis has done over the course of his Pontificate. He’s recently demonstrated through brokering the thaw in Cuban-American relations, that it is far better for opposing sides of a conflict to talk than sabre-rattle. This is a lesson that politicians, nation states and the diplomatic community as a whole needs to come to terms with. The reality is that in today’s world, nations are far too eager to isolate and cut-off other countries. Whether it is a refusal to engage in diplomatic relations, or the economic sanctioning of a nation, the only people who really end up suffering are average citizens. Depending on the players involved, the danger that can manifest itself from not talking can lead to terrifying outcomes. After half a century of isolation, the United States was not able to oust the Castro brothers from power. It is a policy that was abandoned in the name of trying to find common ground, to shift “towards the discovery and acceptance of differences,” like Pope Francis said this weekend. This isn’t to say one compromises their principals, in fact the Holy Father cautioned against just that: “It would end up becoming ‘a way of deceiving others and denying them the good which we have been given to share generously with others.” Much like the Peace of Westphalia which ended the destructive Thirty Years War in 1648, it is far better to peaceful disagree on matters of politics or faith and coexist, than to be in a constant state of active conflict, or worse killing one another. Church-Chinese relations are arguably better today than they have been since the country’s communist revolution over half-a-century ago. Pope Francis has repeatedly expressed a desire to engage with China as soon as tomorrow, however he said the start of establishing that contact is a respectful attitude, something he says exists today. While the Holy See and the Chinese government still stand diametrically opposed to one another on a whole host of issues, dialogue, even little incremental steps, is far better than putting up an iron curtain and grabbing a pair of ear plugs. Whether history will ultimately credit the efforts of the Holy See for a shift in the way early 21st century international relations operate, it is simply too early to tell. However the diplomatic tone and the outreach coming from Vatican City points to a Church that is prepared to engage with and talk to the world.