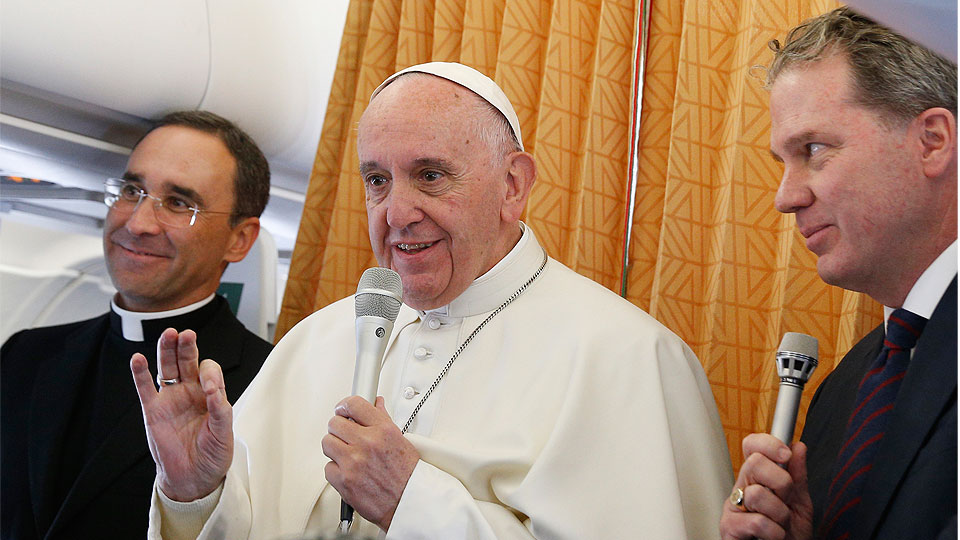 CNS photo/Paul Haring
On his return trip from Sweden last Tuesday, Pope Francis spoke with the journalists on the flight answering their questions about a range of topics including welcoming refugees, female priests, secularization and his meetings with Venezuela’s President. Commenting on the new direction of Sweden to close its borders to refugees, the Pope stressed the clear difference between the "migrant" which "must be treated with certain rules" because they have the right to migrate and "it is regulated by the law", and the 'refugee', who comes from a situation of war, hunger and anguish. Thanking Sweden for what it has done over the years to deal with this kind of problem, Pope Francis pointed out that it is not “human” to close the heart, but at the same time it is necessary to have prudence. The Pontiff added it is very important for any country accepting refugees or migrants, to make sure that they also take steps to ensure they are properly integrated into their host nations, a process which takes time. He went on to warn that a country can pay a political price if they take in more refugees than they can integrate properly. In this context, he warned against the formation of ghettos for refugees or migrant communities, saying this was a “dangerous” development that should be avoided. He was then asked, if it will ever be possible for women to be ordained priests in the Catholic Church. Pope Francis replied, "The last clear word was given by St. John Paul II, and this remains." The Holy Father reiterated that women can "do many things better than men." "The Church is feminine," said the Pope, "there is no Church without this feminine dimension, because it is feminine and Mary is more important than the Apostles in terms of the theology and mysticism of the Church”. In regards to ecumenism, the Pope recalled two initiatives carried out with other churches. For example, with the Evangelical Church, in Caserta, and with the Waldensian Church, in Turin. Both had at their heart the theme "of forgiveness,” to heal past wounds. The Pope admitted that "the Catholic Church did not act in a Christian way with them." Finally, he was questioned about his meeting with the Venezuelan President Maduro. And the Holy Father confirmed he had been asked to mediate in the ongoing dispute between the government and the opposition in that country. He stressed that dialogue is the only way out of this crisis.

For more of the in-flight Papal Press Conference, check out Vatican Connections Fridays at 8 pm ET!