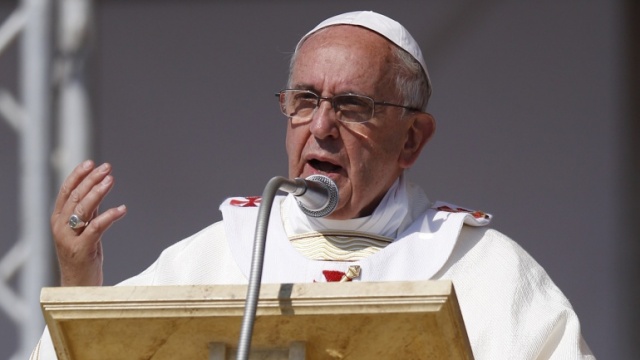 Here is Pope Francis' greeting conveyed to the 132nd Supreme Convention of the Knights of Columbus in Orlando, Florida on August 5, 2014:

His Holiness Pope Francis was pleased to learn that from 5 to 7 August 2014 the 132nd Supreme Convention of the Knights of Columbus will be held in Orlando, Florida. He has asked me to convey his warm greetings to all those in attendance, together with the assurance of his closeness in prayer.
The theme of this year’s Supreme Convention — You Will All Be Brothers: Our Vocation to Fraternity — is one particularly close to the Holy Father’s heart. Faith teaches us that, created in the image and likeness of the triune God and redeemed by Christ’s sacrifice of atonement, the Church is called to be a community of brothers and sisters who accept and care for one another and serve as a leaven of reconciliation and unity for the whole human family. In the complex social and ecclesial situation of late nineteenth century America, this vocation found particular expression in principles of faith, fraternity and service which guided the establishment of the Knights of Columbus. The fidelity of the Knights to these high ideals has not only ensured the continued vitality of your Order, but has also contributed, and continues to contribute, to the mission of the Church at every level and, in particular, to the universal ministry of the Apostolic See. For this, His Holiness is profoundly grateful.
Just as faith is shaped by charity and bears fruit in good works, so the fraternal spirit inculcated by Father Michael McGivney and the first Knights of Columbus continues to be fruitful in the numerous charitable activities of the local Councils which, while meeting the needs of individuals, also build up communities in solidarity and concern for the common good. Conscious of the sacrifice which this great outpouring of charity entails, His Holiness is confident that the Knights will continue to draw inspiration from the teaching and example of Christ in order to reach out to others, especially the poor and disadvantaged, with heartfelt empathy. If service is the soul of that fraternity which builds up peace (Message for the 2014 World Day of Peace, 10), then every charitable work carried out by your Order should be a reflection of the love of Christ, alive and at work in the communion of his body, the Church. By dwelling in that love, we come to see those whom we serve as brothers and sisters; we respect their innate dignity, and we venerate Jesus present in them (cf. Mt 25:40). Jesus assures us that in giving we also receive (cf. Lk 6:38); our works of charity thus become a source of spiritual enrichment, for they open our hearts to a transforming encounter with the Lord.
As the distinguished history of your Order clearly shows, the call to fraternity also finds fruitful expression in the virtue of patriotism and in an active commitment to the growth of an ever more harmonious and just society. His Holiness is grateful for the active role played by the Knights to resist efforts to restrict religion to the purely personal sphere, to defend its proper place in the public square and to encourage the lay faithful in their mission of shaping a society which reflects the truth of Christ and the values of his Kingdom. As he made clear in his Apostolic Exhortation Evangelii Gaudium, “the earth is our common home, and all of us are brothers and sisters”; consequently, “no one can demand that religion should be relegated to the inner sanctum of personal life, without influence on societal or national life, without concern for the soundness of civil institutions, without a right to offer an opinion on events affecting society” (No. 183).
Of particular concern in this regard are the well-known and growing threats to the integrity of marriage and the family. These call not only for vigilance and a consistent public witness, but also for convincing presentations of Christian moral teaching in the light of a sound anthropological vision centered on human dignity and the correct use of our God-given freedom. The Holy Father is grateful for the efforts of your Order to provide its members with ongoing instruction in the faith and to instill a strong sense of civic responsibility. He is likewise appreciative of the support which the Knights have given to such important ecclesial initiatives as the forthcoming Assemblies of the Synod of Bishops, which will treat pastoral challenges facing the family, and the World Meeting of Families to be held next year in Philadelphia. For the family is the ultimate teacher of that fraternity which unites and builds society on the firm foundations of mutual respect, justice, mercy and truth.
With these sentiments His Holiness commends the deliberations of the 132nd Supreme Convention to the loving prayers of Mary, Mother of the Church. Assuring the members of the Supreme Council, and all the Knights and their families, of a grateful remembrance in his prayers, he cordially imparts his Apostolic Blessing as a pledge of joy and peace in our Lord Jesus Christ.
Please accept my own prayerful good wishes for the occasion.
Yours sincerely,
+ Pietro Cardinal Parolin, Secretary of State