Every year around mid-December there is a blessing at the Sunday Angelus Address of angels and little Baby Jesus figurines. 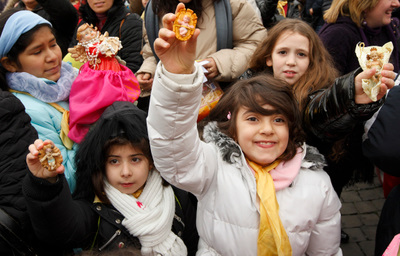 As you can see in the photo, it’s a cute scene to see young children gleefully getting their Baby Jesus figures blessed, so they can be laid in their Nativity scenes at home. And though we’re still a couple months away from Christmas, Salt + Light received a special blessing of babies this past week.  We’re welcoming three babies in five days to our extended Salt + Light family! On Monday, Sebastian Zachary Joseph arrived — born to Erica and Zachary Kourous.  You may not have seen Erica on television, but you’ve heard her voice in promos and may have spoken to her if you’ve called regarding a question about programming. Also on Monday, Gillian Kantor was in the office wrapping up the loose ends for the second season of the book show Word for Word.  She bid us farewell as her due date was coming up the following week.  We received a call Tuesday mid-morning — she and her husband David welcomed their new boy, Henry Francis, just a few hours earlier! Not to be outdone, it was our French department’s turn.  On Friday, while we were welcoming a new month, and celebrating the feast of a great saint, we received news that a third couple was in labour.  Sébastien Lacroix and his wife Marilena welcomed their own Little Flower later in the day, Julia Thérèse! Our congratulations to all of them, and our heartfelt prayers!