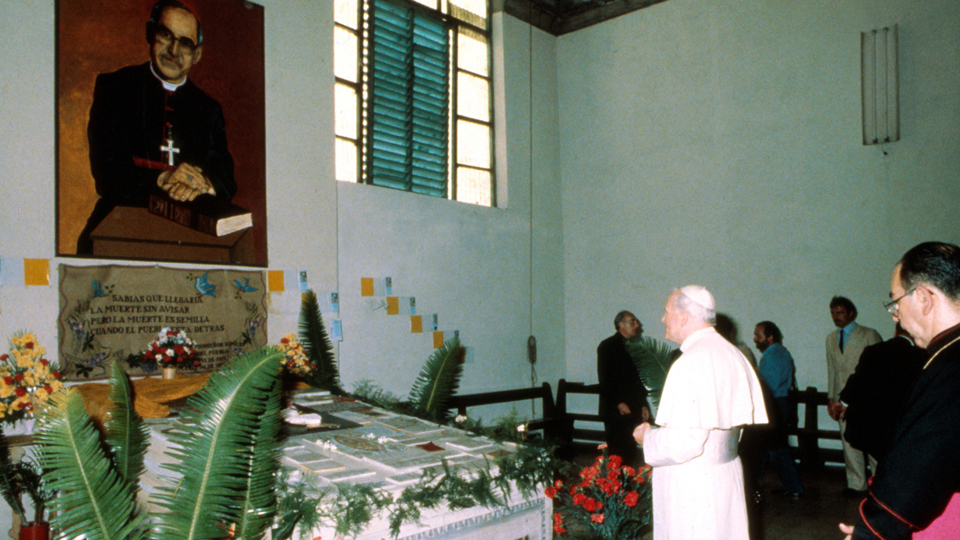 By Fr. Michael Czerny, SJ During the 1970's in El Salvador, farm-worker movements, trade-unions and other grass-roots organizations were seeking economic, political and social change. In the 1980s this agitation became civil war, as several guerrilla organizations united in the Farabundo Martí National Liberation Front to fight the military-dominated government which enjoyed the unconditional support of the United States. The war came to a military climax in late 1989 when the FMLN attacked and took control of half the capital city. At that point of maximum tension, the outcome which the armed forces most feared was that Fr. Ignacio Ellacuría, SJ, might be appointed mediator, forcing them to recognize—and make concessions to—the FMLN. On Monday November 13, 1989, Ellacuría returned from Spain and came home to the UCA of which he was rector. The Jesuit residence used to be located in the nearby neighbourhood, but for reasons of security, a new one had just been built on campus. That same evening, the house was raided by commandos of a U.S.-trained counter-insurgency battalion, allegedly in search of weapons. Later that week on Wednesday evening November 15, at the principal military base about a kilometer from the Jesuit campus, the High Command met. Assessing the risk of an Ellacuría mediation, the order came down: “Kill Ellacuría and leave no witnesses.” Soon after midnight November 16, members of the same battalion invaded the campus and forced their way into the Jesuit residence. Five of the priests were taken out, forced face down on the lawn, and shot in the head. The oldest was killed inside, along with two women who had taken refuge in a near-by sewing room. Who are these eight martyrs of the UCA? First there were two women who were terrified by the fighting near their gatehouse cottage and found safety at the Jesuit residence. Julia Elba Ramos was a very simple woman, semi-literate, faithful and cheerful. She worked in the Jesuit theologate (where I lived for 2 years). While doing the cooking and cleaning, Julia Elba was truly one of the formators of the Jesuit formation community and offered wise counsel to the discouraged. Julia was 42 years old and died embracing her high school age daughter Celina, 15, as if to shield her from the bullets. Julia Elba and Celina represent the people of God, for whom the UCA martyrs did their work and offered up their lives. There were also two Jesuits whom I had only briefly met: Juan Ramón Moreno, well-prepared in philosophy and theology, and formerly Master of Novices in the Central American Province and then the Provincial’s secretary. He was 56 years old, a gentle and soft-spoken Jesuit confrère. Joaquin López y López, from one of the richest families in El Salvador, was a Jesuit who embraced simplicity and humility. He founded Fe y Alegría, a Jesuit-founded programme of basic education for the poorest populations. Lolo was 71 years old. For over ten years, Ignacio Ellacuría was Rector of the UCA. An acute thinker, philosopher and theologian, he was most gifted in his political intuitions and as a mediator. The long-suffering poor motivated his zeal to promote a negotiated settlement to the war. Ellacuria was 59 years old. Segundo Montes was first among the Jesuits to show concern for the refugees displaced by the war and to research their situation. As a sociologist, he produced fine studies of Salvadoran agriculture as well as indigenous culture and religious beliefs. Segundo founded the Human Rights Institute of the UCA (IDHUCA), where I succeeded him as director at age 43. He was 56 years old. I knew two of the Jesuits best: Amando López and Ignacio Martín-Baró. I first met Amando López in Managua in 1978 where he was rector of the Central America High School. A gentle, loving and kind man, he was 53 years old. Around the same time in 1978, Ignacio Martín-Baró and I were both graduate students at the University of Chicago. With great intellectual capacity, Nacho put social psychology at the service of the “voiceless” people, founding the Public Opinion Institute at the UCA (IUDOP). He was 47 years old. The legacy our companions have left us is their witness of faith and deep love for the poor and vulnerable. This is their great strength: as disciples of Jesus, they stood faithful to his Word to the point of offering their lives. So they are a sign, in the midst of growing misery and despite globalized indifference, mediocrity and selfishness, of the radical love of God. “Per fidem martyrum pro veritate morientum cum veritate viventium.” St. Augustine sums up the mystery: By the faith of the martyrs dying for the truth and living with the truth (City of God, IV, 30). Such truth is not true if it does not include Christ, justice and peace. For this fullness of truth, they gave their lives. ______ Fr. Michael Czerny S.J., a Canadian Jesuit, was director of the Jesuit Centre for Social Faith and Justice in Toronto when, 26 years ago, the eight men and women at the Central American University (UCA) were assassinated. The then Canadian Provincial Fr. William Addley S.J., accompanied Michael to the funeral and, shortly thereafter, missioned him to El Salvador to help re-build the UCA. Fr. Czerny is now Special Assistant to Cardinal Peter Kodwo Appiah Turkson, President of the Pontifical Council for Justice and Peace at the Vatican.   This post was an excerpt from Salt+Light’s Winter 2015 Magazine