Ora et labora: the great “Amen!” to a Benedictine masterpiece 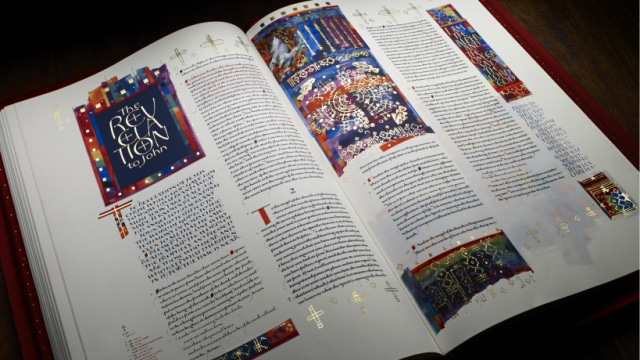 Often our most valuable pieces of art are our most valuable pieces of history. The historic component of a work of art adds to its value because of its character, exclusivity and insight into an age passed through which we glean a portrait of a younger but equally impressive and imaginative humanity.
This will certainly be the case for the Saint John’s Bible, the first hand-written, hand-illuminated Bible commissioned by a Benedictine monastery since the printing press was invented over five hundred years ago. The seventh and final volume of the Bible, consisting of the New Testament Letters and the book of Revelation, will be presented to Pope Francis on Friday, April 17th during a special audience in Rome. It will be the great symbolic conclusion of more than a decade of tireless labor.
The Bible, which was written in English using the New Revised Standard Version translation, was first commissioned in 1998 by the Benedictines of Saint John’s Abbey in Collegeville, Minnesota (Ironically, the Abbey also boasts one of the most celebrated theological printing presses in the English-speaking world, the Liturgical Press). The original Committee on Illumination and Text brought together artists, theologians, biblical scholars and art historians to reflect on the purpose and process of the project. Of central importance was the notion of creating a Bible for the 21st century, that is, one that venerates the Word of God by bringing it to life for the people of our time. The various art forms and representations in the 160 illuminations signal a team mentality of inclusivity and dialogue that are so important for the Church today.
At the same time, by using the manuscript writing techniques of the monks of previous ages—including calfskin vellum, hand-cut quills and lamp black ink—the team revived an activity that was once at the core of the living patrimony of the Church and indeed of the entire human civilization.
The Artistic Director and head scribe was Donald Jackson, who works for the Queen of England’s Crown Office at the House of Lords in London. It was his lifelong dream to hand-write and hand-illuminate a Bible, an undertaking he once called “the calligraphic artist’s supreme challenge, our Sistine Chapel, a daunting task.” Jackson wrote and illuminated the entire Book of Revelation himself.
Apart from being a glorious work of art, the Saint John’s Bible is significant in the life of the Church for these other reasons:
Firstly, as I mentioned, the Bible preserves tradition in the best sense of the word. We tend to think of tradition as something old or outdated, conservative and narrow. Tradition literally means “to hand over” or “to pass on.” It is the opposite of what is commonly and falsely assumed as something “to hold on to.” In the case of the Saint John’s Bible, it’s not incorrect to say that the Benedictines have preserved tradition by creating something new.
Secondly, the Bible testifies to the authority of Scripture in the Catholic tradition. Until midway through the 20th century, Scripture was less a source of life and inspiration in the Catholic community than long-standing traditions and official edicts of the Magisterium. After Vatican II, the Catholic Church was able to rebalance these sources of divine revelation, though practically speaking Catholics generally still lack a solid Scriptural formation. The Saint John’s Bible provides an opportunity for Catholics—and non-Catholics—to engage the divine Word in new and exciting ways. It can contribute to the mission of the Church, as Pope Francis sees it:

"The study of the sacred Scriptures must be a door opened to every believer. It is essential that the revealed word radically enrich our catechesis and all our efforts to pass on the faith. Evangelization demands familiarity with God’s word, which calls  for dioceses, parishes and Catholic associations to provide for a serious, ongoing study of the Bible, while encouraging its prayerful individual and communal reading.” (Evangelii Gaudium 175)

I was fortunate enough to attend university with the Benedictines in Collegeville and see the original Bible on a number of occasions. My work at S+L gave me the opportunity to produce a short video on the Bible that you can view here: