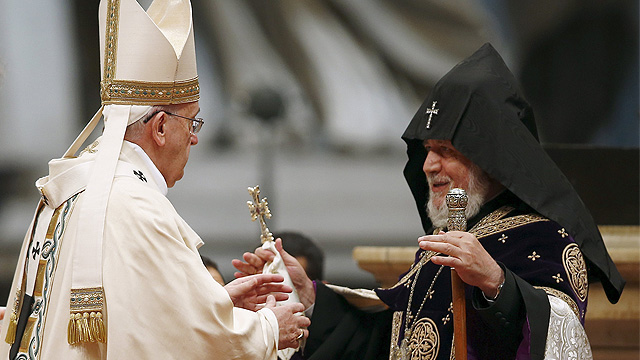 On Divine Mercy Sunday, the Second Sunday of Easter, Pope Francis celebrated Solemn Mass for the Centenary of the Armenian Martyrdom. Read the full text of his opening address below, along with the message of His Holiness Karekin II, Supreme Patriarch and Catholicos of all Armenians:

"On a number of occasions I have spoken of our time as a time of war, a third world war which is being fought piecemeal, one in which we daily witness savage crimes, brutal massacres and senseless destruction. Sadly, today too we hear the muffled and forgotten cry of so many of our defenceless brothers and sisters who, on account of their faith in Christ or their ethnic origin, are publicly and ruthlessly put to death – decapitated, crucified, burned alive – or forced to leave their homeland.
Today too we are experiencing a sort of genocide created by general and collective indifference, by the complicit silence of Cain, who cries out: “What does it matter to me? Am I my brother’s keeper?” (cf. Gen 4:9; Homily in Redipuglia , 13 September 2014).
In the past century our human family has lived through three massive and unprecedented tragedies. The first, which is widely considered “the first genocide of the twentieth century” (JOHN PAUL II and KAREKIN II, Common Declaration , Etchmiadzin, 27 September 2001), struck your own Armenian people, the first Christian nation, as well as Catholic and Orthodox Syrians, Assyrians, Chaldeans and Greeks. Bishops and priests, religious, women and men, the elderly and even defenceless children and the infirm were murdered. The remaining two were perpetrated by Nazism and Stalinism. And more recently there have been other mass killings, like those in Cambodia, Rwanda, Burundi and Bosnia. It seems that humanity is incapable of putting a halt to the shedding of innocent blood. It seems that the enthusiasm generated at the end of the Second World War has dissipated and is now disappearing. It seems that the human family has refused to learn from its mistakes caused by the law of terror, so that today too there are those who attempt to eliminate others with the help of a few and with the complicit silence of others who simply stand by. We have not yet learned that “war is madness”, “senseless slaughter” (cf. Homily in Redipuglia , 13 September 2014).
Dear Armenian Christians, today, with hearts filled with pain but at the same time with great hope in the risen Lord, we recall the centenary of that tragic event, that immense and senseless slaughter whose cruelty your forebears had to endure. It is necessary, and indeed a duty, to honour their memory, for whenever memory fades, it means that evil allows wounds to fester. Concealing or denying evil is like allowing a wound to keep bleeding without bandaging it!
I greet you with affection and I thank you for your witness.  With gratitude for his presence, I greet Mr Serž Sargsyan, the President of the Republic of Armenia. My cordial greeting goes also to my brother Patriarchs and Bishops: His Holiness Kerekin II, Supreme Patriarch and Catholicos of All Armenians; His Holiness Aram I, Catholicos of the Great House of Cilicia, His Beatitude Nerses Bedros XIX, Patriarch of Cilicia of Armenian Catholics; and Catholicosates of the Armenian Apostolic Church and the Patriarchate of the Armenian Catholic Church.
In the firm certainty that evil never comes from God, who is infinitely good, and standing firm in faith, let us profess that cruelty may never be considered God’s work and, what is more, can find absolutely no justification in his Holy Name. Let us continue this celebration by fixing our gaze on Jesus Christ, risen from the dead, victor over death and evil! " 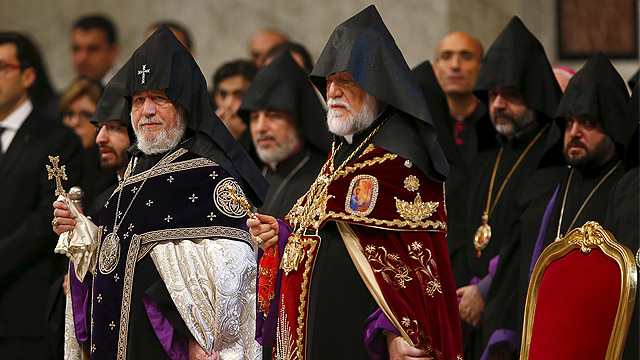