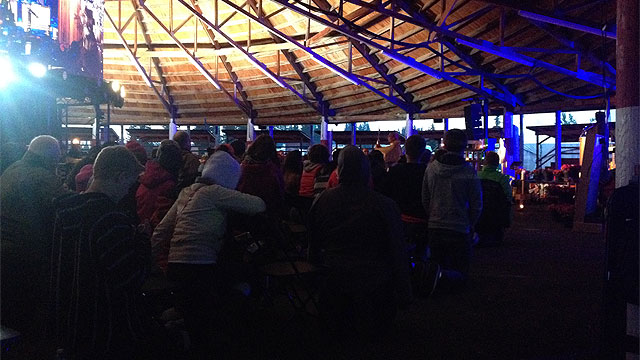 Last weekend, our Salt and Light team had the honour of being on hand for the sixth annual One Rock Youth Festival just outside of Calgary, Alberta. The Tsuu T’ina Rodeo Grounds provided a cozy home for the event, attended not just by young people, but young families and those of all ages from across western Canada. The bulk of the organizational effort was shouldered by the Diocese of Calgary, who with over 200 volunteers hosted three-day gathering.
Originally conceived as a “Catholic Woodstock” by the pastor of a remote parish 100km east of Calgary, the event has blossomed into something much bigger. It now draws a couple of thousand people and has the full backing of the bishops of Alberta. I noticed particularly during my time at the festival, the degree to which Calgary’s Bishops Fred Henry was invested in the proceedings. There was an obvious love for the atmosphere and those present, as was evidence by the beaming smile he bore for each of the three days he attended. Bishop Henry and his brother bishops in Alberta have shown a true desire to provide an opportunity for young people to recharge and deepen their faith lives in a way that is full of fun, but also deep in substance and truth.
There was an impressive list of speakers and musicians who brought alive the weekend, however the true stars were the volunteers and the attendees. Despite being plagued with cold and damp mid-August weather, it hardly dampened their spirits. In fact, countless numbers still camped in tents despite the conditions, and were rewarded with a bright and sunny Sunday morning Mass.
Six years in, One Rock is still in its infancy and continues to grow in size and scope. Our Salt + Light crew were able to capture moments from throughout the weekend and this fall, we’ll share with our viewers a half hour look at this budding event. It is our hope that One Rock can truly shine and that what started as a dream in a small town in southern Alberta, will become a festival that will find its way into the national spotlight.