Have you ever considered Jesus a refugee? 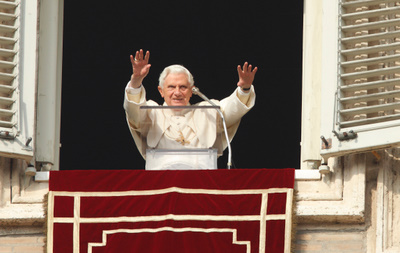 Speaking in his Sunday Angelus address, Pope Benedict XVI reminded the faithful of the Holy Family's escape to Egypt:

On the Feast of the Holy Family, immediately after Christmas, we recalled how even Jesus' parents had to flee their land and take refuge in Egypt to save the life of their child. The Messiah, the Son of God, was also a refugee.

The Pontiff was speaking on the World Day of Migrants and Refugees, a day that he says ""invites us to reflect on the experience of many men, women and families who leave their own country in search of better living conditions." The Pope noted that sometimes this movement is voluntary, while at other times it is imposed by war or persectution. Regarding involuntary movement, the Pope said something very poignant:

Sometimes, unfortunately, Christians feel obliged to take the anguished decision to leave their land, thus impoverishing the countries in which their ancestors lived.

What a way to put it: the region is "impoverished" in their absence. There is a great loss, and not in a material sense of someone having to start over, but in a cultural and spiritual sense. I could not help but think of Christians persecuted in the Holy Land, in Iraq, in Egypt, and those in the region who are leaving in large numbers, and asking, what will the region look like in 30 years? The Holy Father also spoke about his message for the day, which addresses the forming of a single family "in which we recognise one another as brothers." Keeping that in mind, the Pope reminded the faithful that though from different cultures and traditions, it is vital for Christians throughout the world to "form a single entity, as the Lord wishes." Adding, "This is the aim of the Week of Prayer for Christian Unity" which begins on Tuesday. This year, the theme is inspired by a passage in the Acts of the Apostles: 'They devoted themselves to the Apostles' teaching and fellowship, to the breaking of bread and the prayers." (Acts 2:42-47) The Pope added that Monday is also the Day of Jewish-Christian Dialogue, "which recalls the importance of the shared roots which unite Jews and Christians". - CNS Photo/Paul Haring