Together in all things | One Body 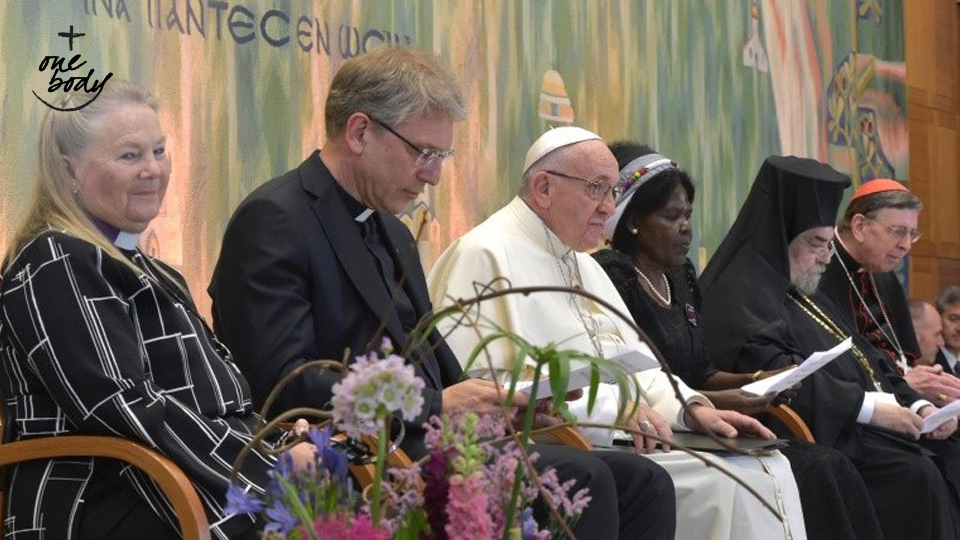 "So let us ask ourselves: What can we do together?" Pope Francis and other Christian leaders gathered for an ecumenical meeting in Geneva in 2018 to mark the 70th anniversary of the World Council of Churches. (Photo credit: Vatican Media)

Together in all things

“Doctrine divides, service unites!” This was a slogan heard regularly in the early ecumenical movement of the 20th century. The polemics of the Reformation and intervening years had left their toll. For ecumenically-minded Christians, the way forward was not through doctrinal debate but working together in care for the poor, orphans, widows, and prisoners. The earliest ecumenical stirrings led to the World Conference on Evangelism in 1910 where the great mission agencies agreed to coordinate their work in world mission. In 1925, the same year that the United Church of Canada was formed as a union of the Congregationalist, Methodist, and Presbyterian churches in Canada as a commitment to the Social Gospel, the “World Conference on Life and Work” in Stockholm gathered churches to work towards further unity in both the life of the churches and in Christ’s work. This stood in some contrast to the 1927 “World Conference on Faith and Order” which was committed to the unity of the church based on a common faith and a reconciled church order. The division within the ecumenical movement between these three streams – Evangelism, Life and Work, and Faith and Order – continually threatens the faithfulness of this enterprise. In 1952, the newly-formed World Council of Churches (WCC) asked the churches “whether they should not act together in all matters except those in which deep differences of conviction compel them to act separately?” Called the Lund Principle because it was asked at a conference in Lund, Sweden, this principle has become a rallying cry for the churches to break down the inertia that inhibits the churches from “doing all they ought to do to manifest the oneness of the people of God”. More than just a principle to encourage evangelism, life, and work together, the Lund Principle makes unity a matter of conscience. Conscience might compel us to act separately on occasion, but more fundamentally, it is conscience that always compels us to examine our causes of division and to test them for faithfulness to Christ’s mission. The Vatican’s ecumenical office offered a Catholic formulation of the same principle:

“Christians cannot close their hearts to the crying needs of our contemporary world. The contribution they are able to make to all the areas of human life in which the need for salvation is manifested will be more effective when they make it together, and when they are seen to be united in making it. Hence they will want to do everything together that is allowed by their faith.” (Directory for the Application of Principles and Norms on Ecumenism, no. 162)

And Pope Francis offered his own endorsement of this principle during a visit to celebrate the 70th anniversary of the WCC in 2018:

“So let us ask ourselves: what can we do together? If a particular form of service is possible, why not plan and carry it out together, and thus start to experience a more intense fraternity in the exercise of concrete charity?”

In Canada, a recent teaching text from the Catholic bishops noted the considerable inertia holding back the churches’ response to Christ’s call:

“A dialogue of life compels us, as appropriate, to move out of our separate compartments, to learn to live our Christian life and mission together. The fact is, Christian communities do not ‘do everything together that is allowed by their faith’; it is indeed more the case that we act separately except where extraordinary circumstances move us to act together. There is much room for growth here.” (A Church in Dialogue: Towards the Restoration of Unity among Christians, p. 18)

Refusal to accept a division between these streams is represented in the Canadian Council of Churches’ mandate for its doctrinal commission, the Commission on Faith and Witness, bringing together doctrinal and pastoral reflections on questions of unity, life, and mission in the member churches. Similarly, in the WCC, efforts to find a “common understanding and vision” have included reflections on confessing the apostolic faith, ecclesiology, world mission, justice, peace and the environment, and biblical hermeneutics.

A graphic history of the World Council of Churches depicting the three streams of the ecumenical movement that converge in the WCC. The same three streams meander throughout local, national, and international ecumenism, sometimes strong and sometimes just a trickle. Click here for more history of the WCC and a PDF version of this graphic.
The ecumenical dialogues between the churches have discovered the wisdom in our search for unity in both doctrine and common witness. Many of the dialogue reports in the past three decades share a pattern in which a convergence on one or more areas of division leads to a commitment to work together in several areas of common witness and service. For example, the Roman Catholic-United Church of Canada dialogue concluded a study of Creation, Ecology, and the Environment in 2017 with its report The Hope Within Us: A Report on Climate Change. This report notes “that our shared understanding of science, revelation, spirituality, and creation theology support[s] a call to urgent and concrete action to address climate change.” The dialogue members then offered three pages of practical suggestions entitled “Call to Action”. Growing Together in Unity and Mission: Building on 40 years of Anglican-Roman Catholic Dialogue is the 2007 agreed statement of the International Anglican-Roman Catholic Commission for Unity and Mission. This unique dialogue commission was formed to find ways to implement the agreements of 40 years of dialogue between these two partners. Beginning with a summary of the convergence and consensus expressed in dialogue since the 1968 Malta Report, the IARCCUM commission offers an extended section entitled “Towards Unity and Common Mission” with numerous practical proposals for “visible expression of our shared faith”, “joint study”, “co-operation in ministry”, and “shared witness in the world”. The members of IARCCUM consist of Anglican and Roman Catholic bishops appointed in 19 pairs from around the world, commissioned by Pope Francis and Archbishop of Canterbury Justin Welby to find ways to live out the great degree of common faith and life that has been articulated by the theological dialogue commission. There are many ways that churches have found to work and witness together. The term “Ecumenical Shared Ministries” is used to describe sharing in buildings, programs, clergy, or worship. There are over 100 congregations in Canada that are shared ministries in one form or another, including many that are joint congregations of two or more denominations. The Anglican, Evangelical Lutheran, Presbyterian, and United Churches in Canada have formed a national ecumenical shared ministries task force, which has developed resources to assist these ministries in their common mission. Although Catholics do not have shared clergy with other churches, we have many examples of shared buildings, programs, and other forms of ministry. In Saskatchewan, the Anglican Diocese of Qu’Appelle and the Archdiocese of Regina have shared a covenant since 2011. Under the terms of this covenant, the bishops recognized a call to “a new stage in jointly building up the body of Christ in our dioceses”. Shared ecumenical work has included the regular study of ecumenical texts, training of greeters, lectors, and other liturgical ministers, and public leadership on matters of justice and public concern. A highlight has been working together in diaconal formation. Both dioceses have introduced the permanent diaconate in recent years and have dedicated considerable resources to the education and formation of these candidates. In addition to joint sessions on common elements of doctrine, practical aspects of ministry, and the history of the diaconate, they have also shared in homiletics and spiritual direction. There was considerable joy as their first cohorts completed their study and prepared for ordination. Though not yet able to share in service at the altar, they share in service in the world. In April 2020, the Regina covenant was expanded to include the whole of the Anglican and Roman Catholic community in Saskatchewan as well as the Evangelical Lutheran and the Ukrainian Catholic churches. This new LAURC covenant, named for the Lutheran, Anglican, and Ukrainian and Roman Catholic partners, begins with the fundamental unity of the church which is expressed in our common baptism. On account of this common baptism, a real but incomplete communion exists between our churches. This is the ecumenical teaching of the Second Vatican Council. Desiring to give further expression to the reality of our communion, the covenant commits the four churches to elements of common life together: prayer, study, action, social life, and leadership in the ecumenical community. Living out these elements of life together is a manifestation of the Lund Principle, as we are called to do all things together except that which conscience requires that we do separately. The Lund Principle is not just a call to churches but a call upon the conscience of all of the baptized. We are called as one body in Christ to find ways to live out a visible witness to the unity of the Gospel. Practical suggestions for living the Lund Principle in your parish include: Nicholas Jesson is the ecumenical officer for the Archdiocese of Regina, former ecumenical officer for the Diocese of Saskatoon, and former executive director of the Prairie Centre for Ecumenism. He is a member of the Roman Catholic-United Church of Canada Dialogue, editor of the Canadian Council of Churches’ Margaret O’Gara Ecumenical Dialogues Collection, and editor of the Anglican-Roman Catholic Dialogue archive IARCCUM.org.