Off the Isle and Back to the Office 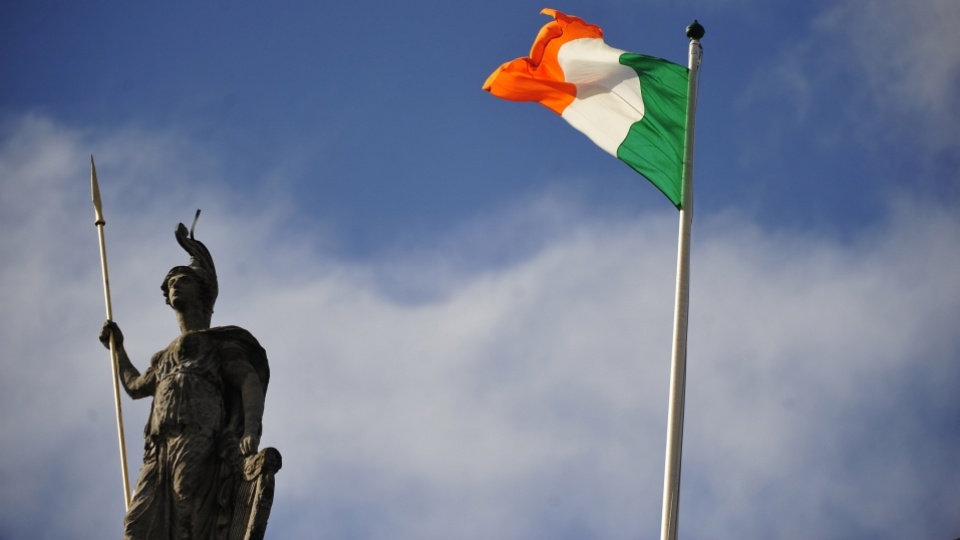 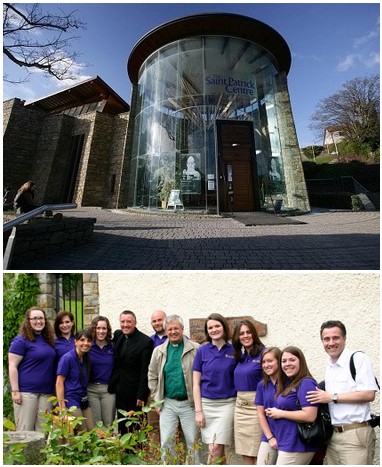 The past two weeks have been a whirlwind adventure through Northern Ireland and the Republic of Ireland. I am overwhelmed by how much I've been exposed to and had the opportunity to learn about  in such a relatively short amount of time. I tried to soak everything up from religious affairs, politics, Irish culture, economics, agriculture, North vs. South, and the list goes on. I am indebted to The Saint Patrick Centre for opening so many doors and windows for me during my time in Ireland. Dr. Tim Campbell, Director of the Saint Patrick Centre, was invaluable to the young ambassadors, providing us with his wealth of knowledge and experience concerning all things Northern Ireland. He filled in the gaps over issues he knew less about by arranging for us to meet an array of influential and diverse representatives of Northern Irish society, politics and culture. Now at the end of this I can say that I have come away with a deep appreciation for Northern Ireland. I was so fortunate to hear so many different perspectives on the land, its people and their different beliefs and principles. It all seems so surreal as I sit here at my desk recalling where I've been and what I've been doing for the past two weeks. From a religion standpoint I was blessed to meet with several remarkable authorities on religion and the Catholic Church in Ireland who were able to enlighten me on its context there in today's society. The majority of the population in Northern Ireland is Protestant, but the seat of the Catholic Church in Ireland is located in the North, in a beautiful place called Armagh. The Primate of Ireland, Cardinal Sean Brady presides there. Another important fact for Catholics is that Saint Patrick began his ministry in the North. His ship docked there some 1500 years ago in Northern Ireland in Strangford Lough. The Young Ambassadors were fortunate enough to take not one but two boat trips through Strangford Lough. The first was on a modern sail boat, the second voyage on Strangford Lough was on a Viking Ship. The Viking Ship was a modeled replica of what the Vikings would have used to arrive in Ireland. I tried unsuccessfully to help rowing it, but with a total lack of any upper arm strength, the oar threatened to either hurl me across the boat or render the Ambassador next to me unconscious. Last week I was in Dublin where I met with Michael Kelly, the Deputy Editor of the Irish Catholic, the largest Catholic newspaper in all of Ireland. We had a fantastic discussion about the Catholic Church in Ireland. Michael gave me a crash course in its history, his take on the current situation of the Church and some very interesting statistics. 60% of Irish Catholics attend Mass once a month and 46% attend Mass every week. These are statistics surpass those of many other countries and I was personally impressed to see these statistics come alive when I met with so many people that are grounded in their faith. 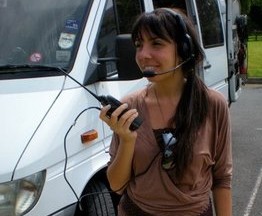 During my time with the BBC I met with the producer and host of Sunday Sequence, the most widely listened to religious radio program in the UK. William Crawley hosts the show every Sunday morning, with the direction of his producer, Martin O’Brien who has been with the BBC’s religious affairs department for an impressive 25 years. Both Martin and William were extremely hospitable to me, they allowed me to sit in on last Sunday’s taping. Sunday Sequence takes an ethical approach to discussing current issues in the news. It is a multifaceted program that takes a great deal of planning and sometimes last minute resourcefulness on Martin’s part to find guests and correspondents to engage in dialogue with William about the various issues they cover. The taping I sat in on covered a few topics, one being the current situation in Gaza. It was really fantastic to see how they went about discussing the issue. Martin was behind the scenes ensuring that they get a correspondent in Israel to comment along with an authority on the Israeli-Palestinian conflict on the show. Then it’s up to the host to keep the guests on course with their discussion where he follows a script, which includes questions that they’ve prepared beforehand. I thoroughly enjoyed my time at the BBC and observing how the religious affairs department works. The experience was invaluable to my formation as an associate producer, allowing me the opportunity to observe how journalists cover current religious and ethical issues. I came away with a lot of new insights into Catholicism in Ireland. I saw the divide first hand that Catholics and Protestant people still experience today. It is obviously to a much lesser degree than during the Troubles, but there are still areas where only Protestant people will live and inhabit and places where only Catholics will live. Dr. Campbell took us through West Belfast where we saw walled and gated communities still in effect. Witnessing this physical segregation stirred something inside of me, so I asked some lay people that I came into contact with about this. I spoke with some really wonderful young Catholics that grew up outside of the Troubles and  who have friends from all denominations. They told me that many of the areas where they live are inhabited by people of many different faiths and that it is incredibly peaceful. Hearing this definitely eased my concerns, to know that what I saw up in West Belfast is not the standard in other communities. Apart from the matters of the Troubles and the divide between Catholics and Protestants I observed several other issues regarding the Church. I spoke with many Catholics and Non-Catholics, who were very kind and willing to share their knowledge and different perspectives on the matter with me. The need for more vocations to the Catholic Church in Ireland was very evident in these discussions.What I took away from all these meetings is that the Catholic faith is still undoubtedly strong in the people of Ireland. What the Catholics in Ireland want is to see an effective and positive change for the better to reinforce that what has happened in the past in regards to clerical abuse does not happen again. Many initiatives have been put in place to lead the Catholic Church of Ireland out of a considerably dark period and into the light of a positive future. The Church has funded initiatives like Safeguarding Children, a national board for child protection that was started in 2006. I pray that the results of the Apostolic Visitation set to take place in the fall will light the way for a stronger Catholic Church of Ireland.

As for my other Ambassador activities, I definitely got the 360 experience. I fulfilled my tourist quotient with many interesting day trips around Northern Ireland and the Republic. Some of the highlights were my visit to the Giant's Causeway off the northeast coast of Northern Ireland. The Causeway is a natural world wonder, recognized by Unesco as a World Heritage Site .  A little trivia for you: The modern discovery of this natural wonder is attributed to the Bishop of Londonderry who explored the region in 1692. The Bishop then brought his findings back to Dublin where scholars then set out to further explore it. During our time in Dublin we visited with Éamon Ó Cuív, the Minister for Social Protection. We also visited the American Embassy where we learned a great deal about how an Embassy functions and operates to both provide information about the respective place it is situated and provide assistance to Americans traveling abroad who are in need of assistance. At Stormont Castle, we met with the First Minister and Deputy First Minister of Northern Ireland. I must admit I was a little apprehensive about meeting the Deputy, Martin McGuinness as he was rumored at one point in political history to hold the title of IRA godfather. This impression I had was quickly dispelled when I met and found him to be a complete gentleman, a person who has come a long way from his IRA days. He works along with First Minister, Peter Robinson to run a very collaborative government, an institution that would never have been thought possible of functioning some 20 years ago. Robinson and McGuinness both represent two different political parties, the SDLP and Sinn Fein, yet they work together as great advocates for reconciliation and are living examples of the peace process. The Young Ambassadors were also involved in several cultural activities where we learned about traditional Irish music, dancing, marching bands and we even dressed up in 19th century costumes and participated in a local play to support the museum of Downpatrick. The important thing to note from all of these meetings and experiences that Dr. Campbell arranged for us: is that we saw the peace process alive and well and we gained a well-rounded appreciation for the history and current situation of Northern Ireland. On my last day I visited St. Patrick’s grave site, Down Cathedral and spent time at the Saint Patrick Centre. The Centre has a permanent exhibition dedicated to Saint Patrick and an IMAX film about Saint Patrick and his legacy in Ireland that was definitely a crowd pleaser. My day there was the perfect ending to a wonderful stay that seems all too short now. I have St. Patrick to thank for being able to have this experience of a lifetime. He came through the graciousness of the wonderful Mrs. Sharon Dicecco, the Toronto representative for the Saint Patrick Centre. I hope that all of Canada can join in this great initiative to create Canadian Chapters for the St. Patrick Centre and support this wonderful organization that promotes peace and reconciliation. I hope that I can also lend a hand in the effort to get more Canadians to go over to Northern Ireland and learn about the land and St. Patrick. The Irish really love Canadians! Everyone was so good to me and I cannot say enough good things about the individuals that I had the privilege of coming into contact with. I took a lot away from the Young Ambassador Program and I intend on keeping strong ties to Northern Ireland. Thank you for sharing in my experience. Please stay tuned for a clip coming soon all about the Young Ambassador experience in Ireland where you’ll get to see just what the Young Ambassador Program is all about. Back to work!