I've been doing a fair bit of traveling lately and one of the things I like to do while in airports is browse through the magazine and bookstores. I never buy magazines or even look through them much, so this is about the only time that I have a sense of what magazines are publishing.
As we approach the Beatification of Pope John Paul II, I've been sad to say that except for the one special issue of LIFE Magazine, JPII is not on the cover of one single magazine. On the other hand, we can't say the same for William and Kate. 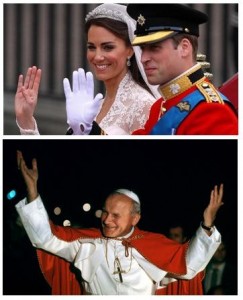 And I was reminded of a similar situation 15 years ago: Mother Teresa was sick and we all expected her to die. Rumblings were beginning about what a living saint she was and what a life she had lived. And then, unexpectedly, Princess Diana died in a car crash. Suddenly, world attention turned to England and while no one was looking, Mother Teresa, quietly slipped away, to be at Home with the Father. It was as if, even in her dying, she had continued the humility with which she had lived. She did not want world attention, so she waited until something else distracted the world, so she could die peacefully without too much fuss. Today, the world celebrates a Royal Wedding. Experts predict that William and Kate's marriage will be stronger and last longer than that of William's parents. Close to one million people lined the streets of London today. The CBC has provided full coverage - it's a holiday in England. All we have heard for the last couple of weeks is "Royal Wedding, Royal Wedding…" and "Wills and Kate, Wills and Kate." And, like it or not, I'm happy for them and happy that they seem to be going about it the right way. I wish them all the best. And they are a very good-looking couple! But, I also can't help notice, how there is another event - it's not going entirely unnoticed, by the way - two million people are expected in Rome this Sunday - in the background. Is it JPII also trying to be humble? Is JPII joining in the celebration of life and marriage, celebrating a young couple with dreams, so that the world doesn't make too much of a fuss about his life and his accomplishments and his Sainthood? Because, after all, it's not about John Paul II and his accomplishments - or about how he has earned sainthood - but rather how God calls us and about how Christ has saved us. It's about the God who says, "don't be afraid." The God, who, by His Grace, calls us home in holiness. Not so much about the man who did his best to live his life according to that call. So, let's celebrate John Paul II. Yes! But let's celebrate young love as well. Let's celebrate marriage, and relationships. But remember that we do so because God loved us first.   Photo credits: 1.  abcnews.go.com 2. CNS photo/Catholic Press Photo