MONTREAL — Today, Oct. 16, is the eve of Brother André's canonization. It is also a day of fine coincidence, call it Providence. 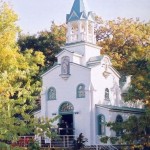 It was on this day, in 1904, that the first, small, wooden chapel built by Brother André in honour of St. Joseph on the slope of Mount Royal in Montreal was inaugurated. Ninety-six years later to the day, thousands of people will gather on this same slope — though now home to the largest shrine to St. Joseph in the world — to give thanks to God for the humble Holy Cross brother, whose life the Church has judged to be an exceptional witness of Christian faith. It is not clear whether the Vatican was aware of the significance of this date in planning Brother André's canonization. Given that another five people will be recognized as saints in the same ceremony, it is highly unlikely that this October weekend was chosen with Brother André's biography in mind. Regardless, the coincidence ties a nice bow around this historic event for the Catholic Church in Canada and does not go unnoticed by devotees of the the soon-to-be saint, for whom it is a wink from above. Tonight, St. Joseph's Oratory in Montreal will be brimming with the prayerful anticipation of many of these devoted faithful in view of Brother André's canonization in Rome on Sunday morning. The evening will begin with a mass in the sanctuary's crypt church at 7:30 p.m., followed by a candlelight vigil, singing, eucharistic adoration and a walking tour of the site. Many are expected to keep vigil throughout the night and to watch the 4 a.m. live broadcast of the canonization on a big screen set up in the crypt church. Reports on these Montreal events, as well as local reactions to the canonization, will be posted here. On Oct. 16, 1904, Brother André was officially given his little church, where many Montrealers came to know God's mercy and love. This weekend, the Church will give Saint André to the world, so that many others may come to know God's love and mercy, too.