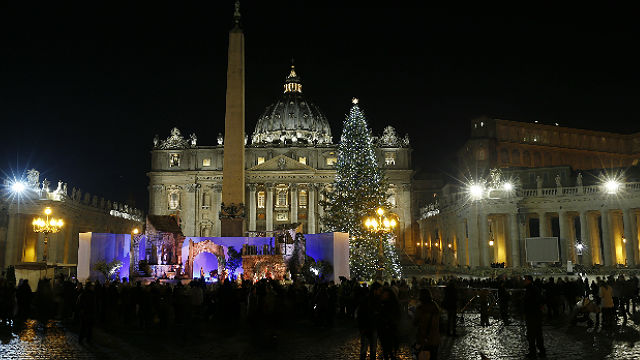 Although it stands tall next to the obelisk in the middle of St. Peter’s Square every year, the Vatican’s Christmas tree is relatively new addition to the Holy See’s yuletide traditions. St. John Paul II introduced the Christmas Tree to St. Peter’s square in the early 80s. Why was the piazza bereft of a tree until then? It could be due to the fact that the Christmas tree is not, strictly speaking, a religious symbol of feast of the birth of Christ. The practice of decorating the home with boughs of evergreen and setting up a decorated tree, seem to be liked to pagan traditions prevalent in Roman times. It was common practice to decorate one’s home with greenery at New Year’s to scare away the devil. Other sources point to the medieval nativity plays. At some point in time the date we now know as Christmas was the date of a feast dedicated to Adam and Eve (or very close to it). Medieval nativity plays kept that connection alive, and as a result often featured live trees decorated with fruits. Eventually the practice was banned. However, it seems people in Germany took to setting up fruit-decorated trees, known as “Paradise Trees” in their homes and keeping them up throughout the Christmas season. The practice of setting up a tree in one’s house was largely confined to Germany. It wasn’t until 1848 that the practice was introduced to the rest of the world, thanks to Queen Victoria. The beloved queen encouraged Prince Albert to set up a decorated tree in the palace just as he did as a child in Germany. A picture of the royal Christmas tree was published in newspapers and magazines around the wor ld and the practice suddenly became fashionable. By the time St. John Paul II became pope, Christmas trees were widely accepted as a Christmas symbol alongside the nativity scene, so it seemed natural to have a tree placed in St. Peter’s square next to the manger scene. Since St. John Paul II had the first tree placed in the piazza different places around Italy and northern Europe have considered it an honour to donate the tree that will adorn St. Peter’s Square. - (CNS photo/Paul Haring)