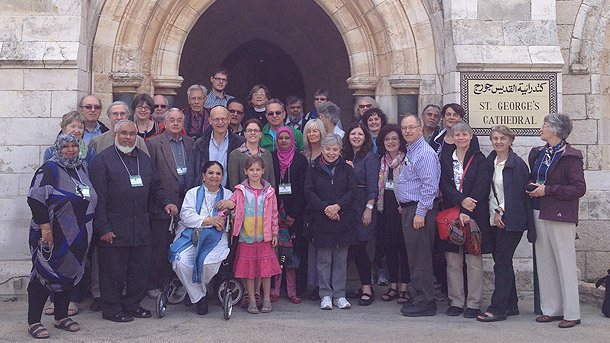 By Rev. Dr. Karen Hamilton
General Secretary, The Canadian Council of Churches
Jews, Christians and Muslims together for the Arabic/English worship service at St. George's Anglican Church in Jerusalem. As word and music filled space and hearts we were made to feel so welcome. What an interesting experience for all but in a particular way for the Christians. The form of the worship service was familiar, the draping of the crosses in Lenten purple was familiar but the Arabic language of the service so much less so. Many of us who are Muslim understood more of the words of the Scripture and Prayers than those of us who are Christian!
We were made to feel even more welcome by the requests for pictures of us and the coffee and cookies we were offered and then our bus wheels rolled again and we were off to the Galilee.
After noshing our lunch on the bus and educating ourselves about both the Five Pillars of Islam and the kibbutz movement, we arrived at Giv'at Haviva an education, reconciliation centre. Mohammad Darawshe spoke to us about the great need for reconciliation between Israelis and Palestinians in the land but particularly from his perspective as an Israeli, Palestinian, Muslim Arab. A narrative of the land.
A little bit of rain, a drive past the Horns of Hattin where the Crusader army was defeated by Saledin and we arrived for our boat ride on the Sea of Galilee. 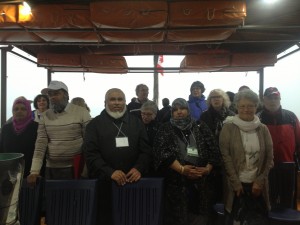 We were not deterred by a little fog, sang both the Canadian and Australian national anthems and then some of us Christians participated in an ecumenical renewal of baptismal vows surrounded by the care and firm support of the rest of our companions on the journey.
We checked into our hotel on Kibbutz Lavi and after a delicious dinner met with one of the rabbis of the kibbutz. We heard a different narrative of the land.
Our de-briefing time was painful as we brought to each other our frustrations with the sometimes intractable relationship between Jewish Israelis and Palestinians. We had heard some stories of hope through the day as well and we long for a different reality, a strengthening and growing of those kinds of situations of reconciliation where what prevails is neighbourliness.
Onwards we roll tomorrow towards Nazareth and Bethlehem, more conversations and the White Mosque.
---
Top Photo: Study Tour members infront of St. George's Anglican Cathedral
Lower Photo: Study Tour members on a boat ride on the Sea of Galilee, despite the rain. (note the Canadian flag at the rear of the boat!)