Notes from the Holy Land: Goodbyes 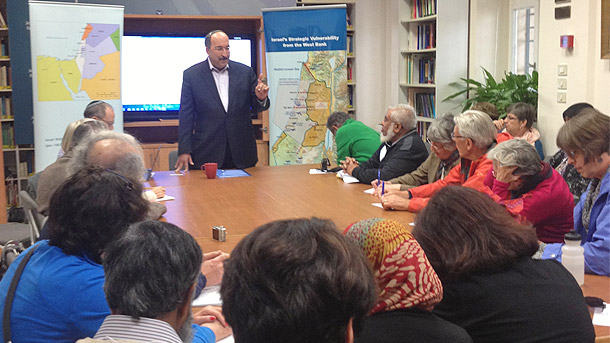 By Rev. Dr. Karen Hamilton
General Secretary, The Canadian Council of Churches
Our final day of journeying together as The Path of Abraham 2014 began with a presentation by Rabbis for Human Rights. The Rabbi who spoke to us was passionate about and committed to peace and human rights for all people of the land. He painted in word pictures the times he had stood in front of a bulldozer come to take down the home of a Palestinian family. He couldn't remember the number of times he has been arrested for such actions! He asked us all to dedicate ourselves, in our contexts, to the rights of every human being, made as every human being is, in the image of God.
We then said a very poignant 'good-bye' to some of our companions on the journey as they journeyed on to other engagements.
The wheels on the bus rolled again and we were off to the German Colony to meet with Ambassador Gold, former Israeli Ambassador to the U.N. Ambassador Gold welcomed us hospitably (we are getting VERY used to the wonderful Israeli coffee) and spoke to us about Israel's security needs. We had questions, he had answers from the perspective of his narrative of the land.
With those bus wheel rolling, our next stop was the city of Ramallah in the West Bank to meet with a representative of the Palestine Liberation Organization. Again, a very hospital welcome in their very mundane-looking office building. That representative, no surprise, had a different narrative of the people in the land from Ambassador Gold. Again, we had questions, he had answers from the perspective of his narrative of the land.
It could not have been more appropriate, in fact it was an intentional decision on the part of the tour leaders, to end our Path of Abraham study tour in the village of Neve Shalom/Wahat a-Salaam. Physically, it is a small village on a not too big hill. Idealogically, idealistically it is a 'game-changer' in dialogue. Arabs and Jews live together, side by side, with their own houses, with their own faiths but in the same physical space, having to share and compromise and work out governance issues for themselves.
We were blessed by their story, the world is blessed by their witness.
It was then to the buses as we scattered to the airport, to Jordan or back to Jerusalem.
The Path of Abraham study tour is over. Perhaps.
On the other hand, if we can truly live forward the recognition of complexity that we have gained, if we can live in deep peace with ALL our neighbours, the journey has just begun.....
---
Photo courtesy of Rev. Dr. Karen Hamilton