Not Only Football this Sunday, but Faith and Family Too

This Sunday's Super Bowl offers one of the biggest sporting events of the year, but before the big game, at 4:30pm ET, Salt + Light Television is inviting viewers to tune in for Faith Bowl III. 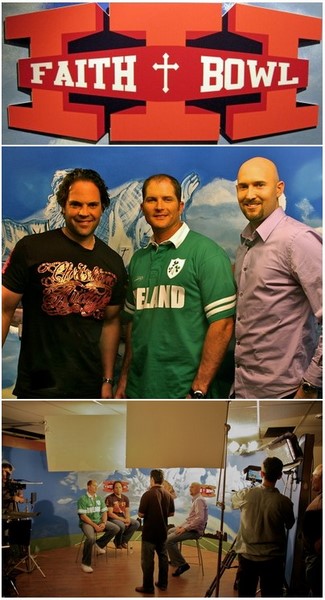 Over the course of a 30 minute round-table discussion, pro-athletes Mike Piazza, Mike Sweeney and Bobby Keppel talk about their Catholic faith, the important role of husbands and fathers, prayer, family life, and what makes a “true man.” The content of this program is great for men.  I found Sweeney's description of meekness particularly interesting. What do you think it means to be meek?  "Weak" or "Spineless," as the guys suggest?  Or have you ever considered it as power under control?  Yes, power under control.  Mike Sweeney explains how he discovered this definition when preparing for a talk on the Beatitude "Blessed are the meek, for they shall inherit the earth" (Matthew 5:5).  It's definitely worth it to hear what he says! It's refreshing to listen to these three men talk openly about the challenges they've experienced in family life and in their careers.  It's also impressive to hear how committed they are to their family and their faith. As a backgrounder on the players in the show: Mike Piazza is a retired catcher after a 16-year career in Major League Baseball, mostly with the New York Mets and Los Angeles Dodgers. He was a 12-time All-Star and the 1993 National League "Rookie of the Year."   A designated hitter for the Seattle Mariners in 2009, Mike Sweeney is a 15-year MLB veteran and five-time selection to the All-Star team as a Kansas City Royal.  The moderator of the show is Bobby Keppel.   A relief pitcher for the Minnesota Twins last season, he appeared in 37 games in 2009 and was the winning pitcher of the Twins' playoff game with the Detroit Tigers for the American League Central Division title. Faith Bowl III was produced by California based Family Theater Productions in conjunction with the Knights of Columbus and  Catholic Athletes for Christ.  Many of our readers are familiar with the Knights, but may not know about CAC.  CAC is a growing organization which serves Catholic athletes in the practice of their faith and helps them to promote a Catholic sports culture.  On the Knights' website Fathers for Good, you can also read more about the show in the article Faith on Superbowl Sunday. Faith Bowl III airs on Salt + Light Television Sunday, February 7th at 4:30 and 9:30pm ET.  Or stream us live online HERE.