No need to be alone, join us this Sunday for March's Lectio Divina

Avoid being alone.
Well, at least avoid the word "alone" when it comes to some theological arguments. That from Archbishop Thomas Collins in this month's Lectio Divina. He's speaking in the context of the Scripture passage that deals with faith and works: 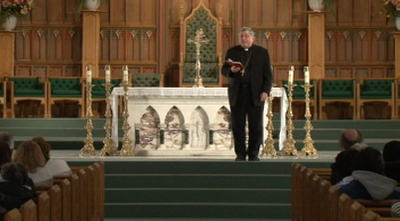 But someone will say, "You have faith and I have works." Show me your faith apart from your works, and I by my works will show you my faith. ... For as the body apart from the spirit is dead, so faith apart from works is dead. (James 2)

The Archbishop cautions the use of  "alone" arguments: faith alone; works alone; grace alone; etc.  Rather, we should be looking at the whole -- after all, that's part of the etymology of the word Catholic (whole, universal). This is one area Archbishop Collins discusses as he meditates on the remainder of chapter one and all of chapter two from the Letter of St. James. Join us for the March broadcast edition of Lectio Divina with Archbishop Thomas Collins: The Letter of St. James this Sunday, March 13th, at 8:30pm ET, or catch the encore presentation Wednesday, March 16th, at 8:00pm ET. Also, check out Archbishop Collins new book on Lectio Divina and the Sermon on the Mount: Pathway to our Hearts.