"No door can or should be closed": Vatican releases Communications Day message

Pope Benedict is encouraging priests to embrace new media and thus "give a soul" to the internet. The priest's place in the digital world was the focus of his message for the 44th World Day of Communications, which was released this morning on the eve of the feast of St. Francis de Sales, patron saint of journalists. It will be officially presented on May 16th, which the Church recognizes as World Communications Day. 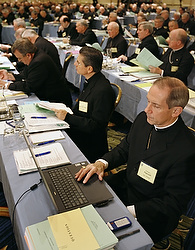 "Priests can rightly be expected to be present in the world of digital communications as faithful witnesses to the Gospel," declared the Holy Father, noting that the pastor's leadership extends even to his community's "digital marketplace". The pontiff insisted that priests, "from the time of their formation", learn how to use technology like websites, blogs, and online video "in a competent and appropriate way". The pontiff cautions clerics that they should be "less notable for their media savvy than for their priestly heart". The theme of the 2010 message, "The priest and pastoral ministry in a digital world: New media at the service of the Word", appropriately coincides with the Year of the Priest, which the global church continues to celebrate through June. This is effectively the second chapter of Pope Benedict's thought on new media, as it follows last year's World Communications Day message titled, "New technologies, new relationships: Promoting a culture of respect, dialogue and friendship".

From the Vatican, 24 January 2010, Feast of Saint Francis de Sales.