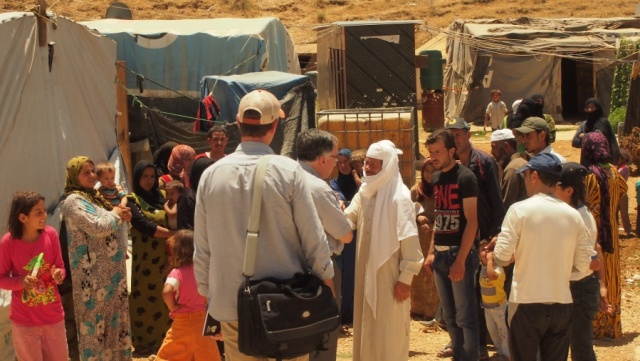 It was not too long ago that we heard about the Syrian civil war every night on the news.  As the original struggle of the Syrian people for greater liberty morphed into a violent tit-for-tat with Bashar al-Assad’s government, the eyes of the international community were fixed on the country, appalled daily by the skyrocketing death toll.
A significant result of that more than three-year war, of which there is yet no end in sight, has been the displacement of millions of Syrian citizens, mostly to the neighboring countries of Lebanon, Jordan and Turkey.  While they have for the time being escaped the deadly violence of the conflict, their state of living has greatly deteriorated. The fear of the citizens of the Middle East is that this extraordinary crisis will become ordinary, i.e. “the norm.”  Refugee camps have sprung up and continue to grow throughout the region, while a lack of resources and infrastructure in the host countries diminishes the hope that a more dignified social and economic co-existence can be nurtured between citizens and refugees. In collaboration with the Canadian Catholic Organization for Development and Peace, Salt and Light Television has moved into the initial stages of producing a feature documentary on the terrible reality faced by millions of Syrians and their families.  It will also look at how the host countries are dealing with the crisis and how the Catholic Church is responding through the work of Caritas and Development and Peace.  We hope to remind the world that this crisis is still just that: a crisis, and that the devastating prospect of a permanent refugee presence in the Middle East remains, and may be materializing before our eyes. Stay tuned for more information in the coming months.  To learn more about the work of Development and Peace amidst the Syrian crisis click here.