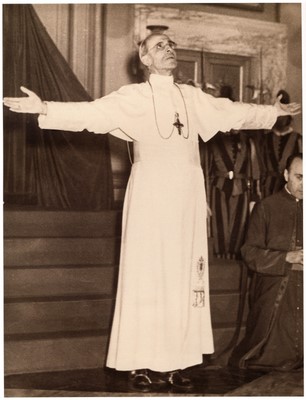 This Sunday, November 23rd, at 9:00 pm ET Salt + Light TV premieres its newest documentary A Hand of Peace: Pope Pius XII and the Holocaust. The film could not come at a more appropriate time. More than fifty years have now passed since the death of Pope Pius XII and his legacy remains the focus of a passionate, and sometimes acrimonious, debate among Catholic leaders, Jewish authorities and historians. For half a century the debate has raged, "Did Pius XII do all that he could to save the Jews?", "Was he "Hitler's Pope?"
In the Gospel of John Jesus told his disciples "...you shall know the truth, and the truth shall make you free." The pursuit of truth and justice was at the heart of the two years I spent researching, writing and producing A Hand of Peace. Ever since German Playwright Rolf Hochhuth's controversial 1963 play "The Deputy," Pius XII has gradually come to be seen as something of a pariah in the public eye. He was, in the popular mind, at best a morally weak Pope who succumbed to Nazi intimidation or at worst an anti-Semite with little remorse at the murder of six million Jews during the Nazi Holocaust. The true version of events, supported by the latest historical research and the eyewitness testimony of those who lived through those perilous times, tells a vastly different story. A Hand of Peace is the first film to combine rare archival footage of Pius XII, and the testimony of a wide array of experts to vindicate a great Catholic leader from the lies that have tarnished his legacy. Featuring interviews with world renowned Holocaust historian Sir Martin Gilbert; the Jesuit historian and postulator Fr. Peter Gumpel; author and ardent Pius defender Sr. Margherita Marchione, M.P.F., Ph.D., this gripping documentary explores the difficult choices Pius XII faced during the Second World War, and provides convincing proof that his bold, yet discreet, prophetic actions saved tens of thousands of Jewish lives and paved the way for a new era of Catholic-Jewish relations that have deepened over the past 50 years. I hope you will tune in this Sunday night to our premier and that you come away informed and inspired to defend Pius XII and the Catholic Church in this important contemporary debate.