As you've probably read in the last 24 hours, the Congregation for the Doctrine of Faith has released new norms concerning serious crimes -- which covers such topics as clerical abuse, pornography, discipline, and the Sacraments of Penance, the Eucharist and Holy Orders.
Holy See Press Office Director Fr. Federico Lombardi, SJ, offered an explanatory note on the new norms: 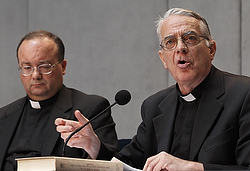 In 2001 the Holy Father John Paul II promulgated a very important document, the Motu Proprio "Sacramentorum sanctitatis tutela", which gave the Congregation for the Doctrine of the Faith responsibility to deal with and judge a series of particularly serious crimes within the ambit of canon law. This responsibility had previously been attributed also to other dicasteries, or was not completely clear. Continue reading

For more information on the modifications made in the Normae de gravioribus delictis, including an introduction by the prefect of the congregation, Cardinal Levada, and the actual norms, visit the Vatican website HERE. You can find similar resources on the Canadian Conference of Catholic Bishop's website HERE too. Catholic News Service's Rome bureau offers this report on the modifications as well:

Vatican says new norms will strengthen efforts against abusive priests By John Thavis VATICAN CITY (CNS) -- The Vatican has revised its procedures for handling priestly sex abuse cases, streamlining disciplinary measures, extending the statute of limitations and defining child pornography as an act of sexual abuse of a minor. Vatican officials said the changes allow the church to deal with such abuse more rapidly and effectively, often through dismissal of the offending cleric from the priesthood. Continue reading