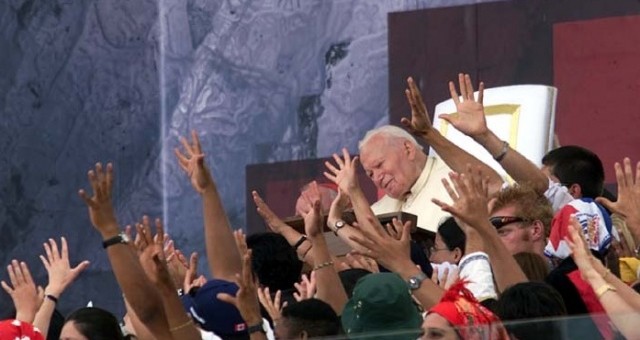 There are many ways to live a World Youth Day. Of these, the classic one is to be a faithful attendant of the special occurrence. Another one is to tell what’s happening, instead, and bring others into the event. This is the role I’ll be covering in 360 degrees over the next few days, and further I’ll be able to explain what attending a WYD has been like for me. It’s something more intimate and those memories and emotions I can bring to you by just closing my eyes for a second… My WYD can only be that of 2000, in Rome, on the occasion of the Jubilee. A Holy Year, obviously not like the others, that not only marked the end of a century but even the beginning of a new millennium. Living in Rome offers many privileges and endless opportunities when it comes to Catholic celebrations, but having the WYD in front of one's house, literally, is really something that happens to a very few. My family and I, during that sultry summer of 2000, found ourselves living that event in a unique way. I remember the human tide that filled the vast plain of Tor Vergata, as well as the steady stream of young people who passed along my way to get to the Pope for the evening vigil. Since living in that area, a few days before, we had received a special pass from the mayor Francesco Rutelli, a coupon that allowed us to move freely in our district despite the checks and the engaged areas for young faithfuls. I remember the long night of August 19, 2000, sitting on the lawn of Tor Vergata with my father and my aunt and the smiling and amused face of Pope John Paul II, dragged by the contagious enthusiasm of the young people, the music and the incredible festive atmosphere we breathed. I was 13 years old that summer, and last year, filming an episode of Perspectives at Tor Vergata for the 15th anniversary of that WYD and remembering what had happened in 2000, I found myself seized with a great emotion. Never would I thought of going back there, after so many years, to tell those childhood memories as a journalist. And the memories of those days bring me right back to today, to Krakow and to this next impending appointment. To speak about moments like these implies patience and flexibility, because, sometimes, just passion and faith are not enough to cope with the impressive amount of work. Great events require a maximum effort, but at the same time offer unique reasons that are a boost of rare power. Being able to tell what will happen in Poland remains an undoubted privilege because to explain what’s going on somewhere in wich one million of people are gathered does not happen every day. This numerical data by itself, for example, gives the idea of what regards appointments like this one. And when they’re young people involved, who, setting rhetoric aside, are actually the future, then attention and curiosity inevitably increase. It will be another story to tell, with the memory of Tor Vergata that is within me but which will make room for this new version of this special event. A WYD to live in a different way, accompanying people from home to experience the emotions that Pope Francis and Krakow will certainly give. photo by Corriere Del Sud