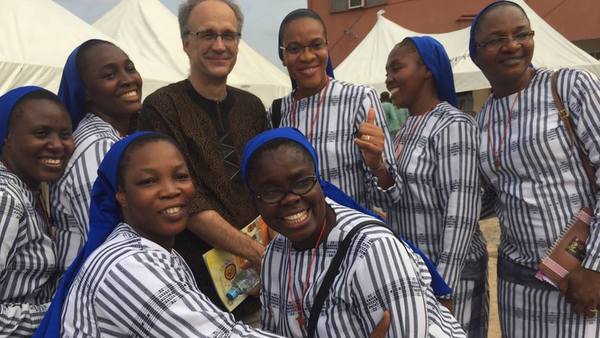 False promises of a better future is the way traffickers usually bait and enslave their victims. Most of the time their targets are the poor or marginalized; especially girls who lack access to education and basic services. But the Sisters of the Sacred Heart in Nigeria are doing everything they can to put an end to all that. They’re offering girls real hope by providing: education, skills and most importantly an opportunity to follow the path God desires for their life, and not some exploitative human agent. A big part of helping young women escape this trafficking trap is by supporting these courageous Sisters in their own development. Dr. Thomas Ryan recently returned from Benin City, Nigeria, where he helped introduce the Sisters of the Sacred Heart to their new online courses. During his stay, he toured their ministries and joined in the local festivities. I asked him to share some of his experiences with us - The Sisters of the Sacred Heart of Jesus celebrated their 40th Anniversary celebration on Saturday, tell me what that was like? Everything about it was celebratory--people's dress, the music and singing, and particularly the dance. Several dancers in traditional dress participated in the mass's various processions. Then the offertory concluded with a thanksgiving procession in which practically the entire congregation lined up to dance to the front and offer contributions in honor of the sisters, while being doused with holy water. As part of mass, two sisters made their final profession and one marked the silver jubilee of her first religious vows. So, mass was long and marked at times by elaborate ritual. A meal was served following mass and a reception with music and more dance followed that. What a celebration! After all that, practically the entire community of Sisters of the Sacred Heart along with Sr. Sylvia Thibodeaux, SSF, descended upon the home of retired Archbishop Ekpu, founder of the SSH community. He was unable to stay for the entire mass, and so the sisters went to him to thank and sing to him and hear his and Sr. Sylvia's reflections on the founding of their community. 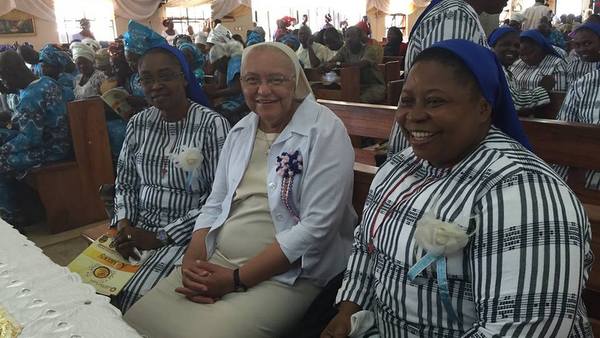 Sr. Monica, Sr. Sylvia (founding formation director of SSH community in Nigeria), and Sr. Florence at the 40th anniversary celebration of the Sisters of the Sacred Heart in Benin City. You were also in Benin City, to introduce some of the Sisters ( LIM students ) to their online courses - tell us about that experience. The grant involves 7 Sisters of the Sacred Heart studying towards a certificate in theology and ministry. The purpose is build social media and leadership capacity so that they can communicate their work more effectively to the world and so increase the number of vocations and benefactors. I delivered computers, books, and videos to the students who began class last week. By the end of the program, they will develop a communications plan that will guide their use of social media and the documentary produced by Salt and Light. It was exciting to see the sisters begin to think about the opportunities they have to communicate their charism in their context. I look forward to seeing where they take this. What was the general reception to these online courses and why are these courses so important? The courses will provide a foundation in theology, leadership and communications on which the communications plan I mention above will be built. Sisters were excited and a little intimidated by the courses. That's why I'm glad I was there to introduce the program to them and suggest ways to navigate through the courses. It's also exciting that they will be studying with sisters from other parts of Africa, from Asia, and from the US; so they will form a global learning community focused on the vocation of communication. What impressed you most about the Sisters during your visit? I was most impressed by the sisters' hard work, the joy of their prayer and lives, the range of their ministries, and in how big they think. They are definitely in a building phase--building schools in particular. The place I was most impressed with was the Novitiate in Uromi that includes the cottage industries that teach skills and employ women in baking, weaving, and sewing. The farm was also impressive, and especially the fruits--the papaya, mango, and bananas. I also tried a cashew fruit and soursop--both firsts for me. 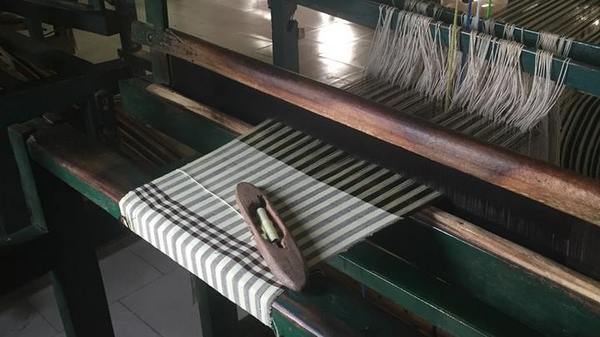 Part of loom in SSH Cottage Industries in Uromi that teaches skills and offers employment. The SSH habits are woven there and are intentionally African. The Sisters were founded after the Nigerian civil war, a particularly intense tribal conflict, how have the Sister’s work continued to heal old wounds? I'm not sure I would call it a tribal conflict. It was that, but it was also a national conflict that could have torn the country apart. And so, the motto of the sisters, ut unum sint/that they may be one, is so inspiring. It recognizes the amazing diversity of Nigeria while holding out hope for unity within that diversity. We in other parts of the world would benefit from such a vision and commitment. I understand the Sisters are committed to upholding women's dignity (especially in the work of preventing human trafficking), can you share one or two anecdotes about the impact of their ministry? I was there for about 10 days and so saw only a few of their ministries. I would need to stay longer to experience the whole range of their ministries. From what I saw, I was most impressed with their work in education. The all-girls Presentation National High School that they run in Benin City is one of the best schools in the country, in fact in recent years the best, not just among all-girls schools but among all schools. I was impressed with their commitment to teaching women vocational skills in their cottage industries and in their habits that are intentionally African and so celebrate the dignity of African women. 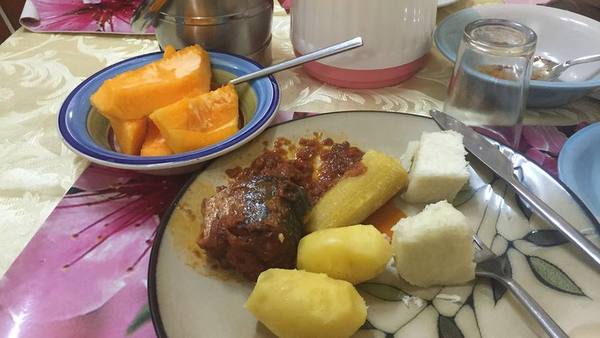 Breakfast at the Sisters of the Sacred Heart community in Lagos: plantain, cassava, yam, tomato stew, mackerel, papaya, tea. On a slightly different note, did you make any interesting associations between New Orleans and Benin City? Clear connections exist between New Orleans and Benin City. The food: Okra figures in important Nigerian dishes and in Louisiana gumbo. Jollof rice reminds me of jambalaya. Then there was music. The percussion and brass I heard at the celebration reminded me of jazz. Tribal chiefs play an important social role in Nigeria, and status seems to be marked in part by lovely coral beads. Tribes of Mardi Gras Indians are led by their chiefs, and, of course, beads figure centrally in Mardi Gras. Read more about the Sister's of the Sacred Heart here.

The Producer Diaries  - Cheridan Sanders shares her experiences developing an original television series featuring women religious communities located in Africa, Asia and the United States. The globe-trotting adventure invites readers to delight in each community's spiritual gifts as they: educate girls, minister to outcasts, prevent human trafficking, and so much more. The production is an exciting collaboration with the Loyola Institute for Ministry in New Orleans and is made possible through a grant from the Conrad Hilton Foundation.