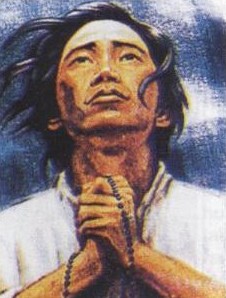 The last Monday of August is always the day that the Philippines celebrates its national heroes. This day falls on August 24th of this year and so I started reflecting on the national heroes I remember.
My mind went to the national saint in my history books in the Philippines -- Lorenzo Ruiz. I looked him up and, to my surprise, he has already been canonized! I remember being struck by his story when I was in elementary school in the Philippines, where I had always known him as Blessed Lorenzo Ruiz. Lorenzo Ruiz was martyred during the persecution of Japanese Christians in the 17th century. He was an altar boy in the convent of the Binondo church in the Philippines and was educated by the Dominican friars for a few years. He had been peacefully working as a clerk in the Binondo church, supporting his wife and three children, when he was falsely accused of killing a Spaniard. Lorenzo then sought asylum on board a ship with three Dominican priests. This boat landed in Okinawa, Japan, where the group was arrested and persecuted for their faith. It is the tortures that Lorenzo Ruiz endured for his faith that I remember vividly and very visually. They were tortured using these different methods: hanging by their feet, being submerged in water until death and other water tortures, needles being inserted under their fingernails, and being beaten until unconscious. These tortures broke down Lorenzo’s companions, but he never renounced his faith. On September 27, 1637, Lorenzo and his companions were taken to the “Mountain of Martyrs”, where they were hung upside down into a pit. Lorenzo died from hemorrhage and suffocation, and his cremated remains were thrown into the sea. I used to look at my hands and fingernails as a child. I tried to imagine needles being inserted underneath my nails, as I cringed in horror. Lorenzo must have had a very deep love of God to go through what he did. Pope John Paul II beatified Lorenzo Ruiz in 1981. He was also the one to canonize him in 1987, the year that my family left the Philippines for Canada. St. Lorenzo Ruiz, pray for us.