My first time in an active war zone:
Filming for Salt + Light Media in Central Africa 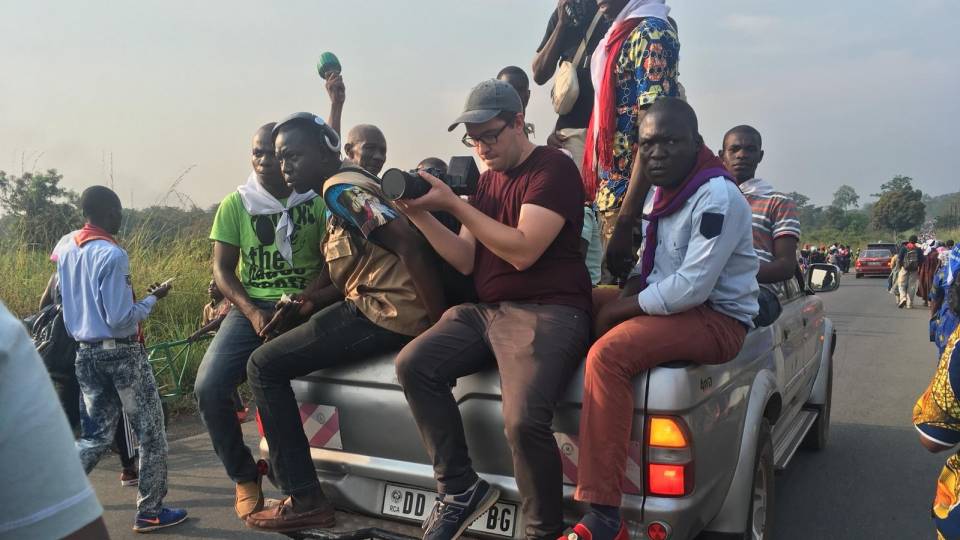 The Salt + Light Media original documentary Fighting for Peace airs on Sunday, February 9 at 7 pm ET / 4 pm PT.
In November 2018 when my colleague Charles Le Bourgeois asked me to join him as cameraman for a documentary in the Central African Republic, I knew very little about the country. I had seen the occasional media report covering conflict in the region, and I knew that Pope Francis had been there in 2015. But that was it. So I looked it up. Turns out it’s been in the middle of a civil war since 2013. Oh my. When I started working for Salt + Light Media, I never expected to go to dangerous places. But I was barely in the job for a year and a half when I found myself in El Salvador, a nation plagued by gang violence, doing location sound for The Francis Impact. Fortunately, the only conflict we encountered there was from a woman suffering from mental illness who whacked our cameraman Peter on the head with a branch. As for Central Africa, we had been invited by Cardinal Dieudonné Nzapalainga, Archbishop of Bangui (the capital city), and I took comfort knowing that His Eminence wouldn’t have invited us to film a documentary in the heart of Africa if he felt we wouldn’t be safe. And so, we filled out the 8-page visa applications, and before we knew it, we were on our way. Now, just over a year later, as we're getting ready to release the English version of our documentary Fighting for Peace (Un combat pour la paix), I wanted to share my experience with you through five of my favourite moments in our film. 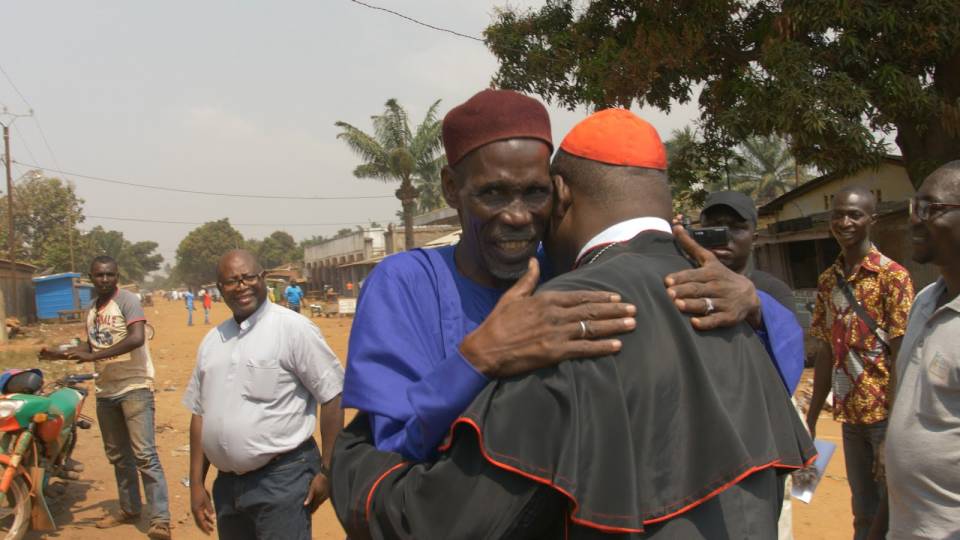 Fighting for Peace (Salt + Light Media 2020)
This took place the day after we arrived and was our first full day of shooting. PK5 is the predominantly Muslim neighbourhood in Bangui and has been overridden with violence over the years. Walking through the streets and greeting the people who live there was the cardinal’s way of showing that Christians can come in peace. Filming this part was intense from my perspective because it was incredibly hot, and being the only camerman, I was literally running with my equipment from in front of the entourage to the sides and behind to get coverage of the procession. At the same time, I needed to stop and film general shots of the neighbourhood to provide flavour and context. But I had to make sure, too, to be in the right place to catch important interactions like this one. 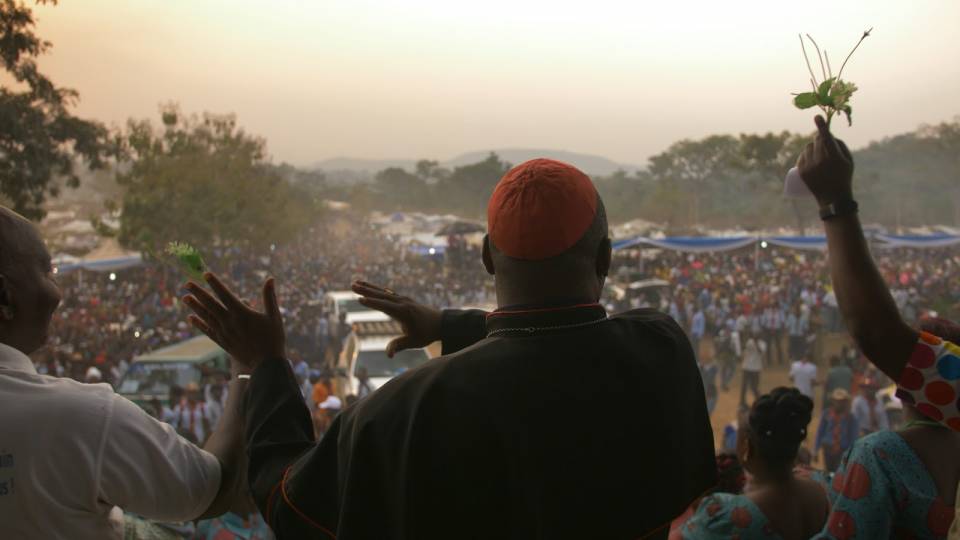 Fighting for Peace (Salt + Light Media 2020)
Here we had just arrived at the pilgrimage site of Ngu-komba, a popular Marian shrine not far from Bangui. There was an astonishing amount of people present, and despite the conflict, everyone was singing, dancing, and showing their faith. As I saw the cardinal walking towards the stage, I couldn’t help thinking of the image from the Knights of Columbus documentary Liberating a Continent with St. John Paul II stretching his arms out in front of a large crowd. I knew I had to get the shot. I ran up the stairs before the cardinal, got into position, and set my exposure and focus just in time. It was worth it. 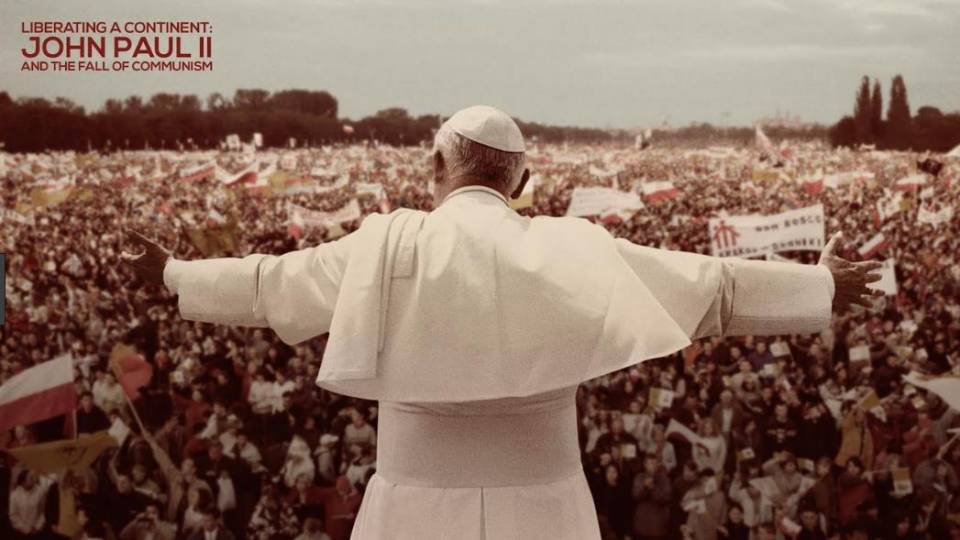 Liberating a Continent (Knights of Columbus 2015) 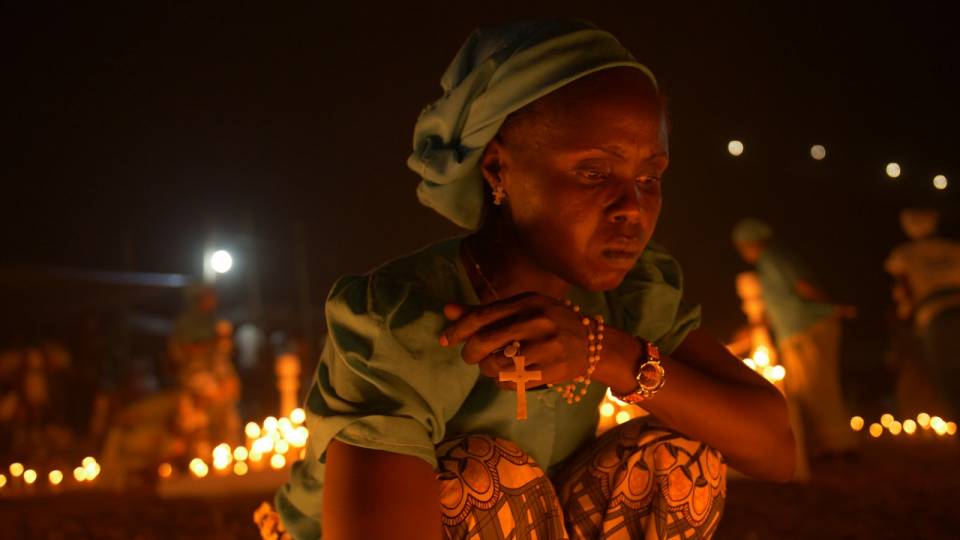 Fighting for Peace (Salt + Light Media 2020)
The Central African Catholics have a strong Marian devotion, highlighted here by a candlelit shrine. I was impressed at how well the candles lit up the faces of the pilgrims, and we were able to use this image as a beautiful and powerful way to express this aspect of their faith in our film. 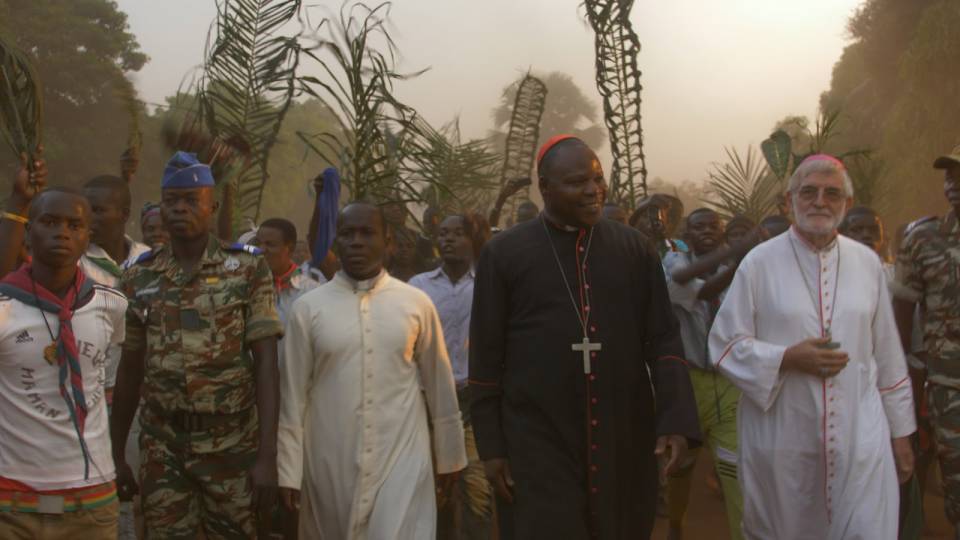 Fighting for Peace (Salt + Light Media 2020)
You’d think it was the pope himself arriving, with the massive crowds of people marching and cheering alongside the cardinal. And in a way it was, because it was Pope Francis who inspired him to courageously take charge in doing what he can to build peace and foster hope. Some of the bigger villages had a police/military presence as you can see in this picture, while others relied on the Catholic Boy Scouts to link arms as a way to separate the crowd from His Eminence.

5. The Rural Roads of CAR 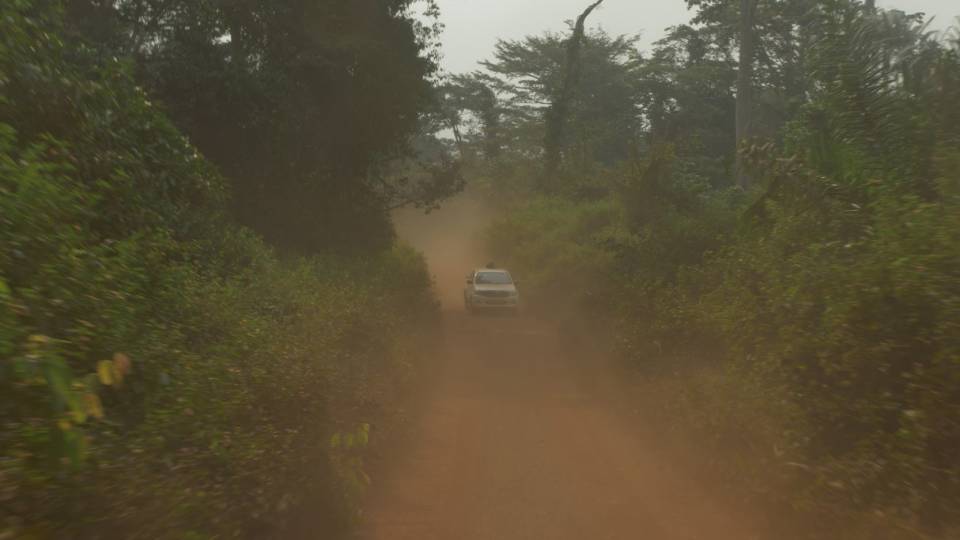 Fighting for Peace (Salt + Light Media 2020)
Having been born in Edmonton, I am very familiar with the notorious potholes that emerge there every spring, but even for me these roads were a whole new level. We rode in an SUV with the cardinal and had our belongings tied to its roof in a tarp . By the end of the first leg of the trip, it was covered in red dust, and my butt was sore from the constant up and down. It really tested the image stabilization of my camera, too. 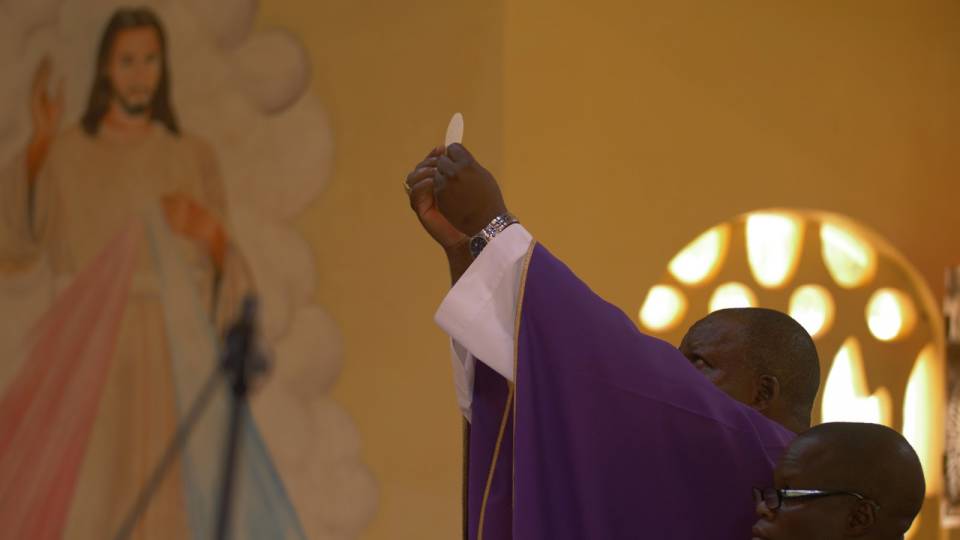 Fighting for Peace (Salt + Light Media 2020)
Okay, I couldn’t pick just five! Above, we see the cardinal elevating the Eucharist during Mass with an image of Jesus on the wall in the background. I think this gives a great emphasis, visually, of the consecrated nature of the host. Below is a shot of some local children who wanted to see the cardinal so bad they climbed the lattice of the windows to peer through! 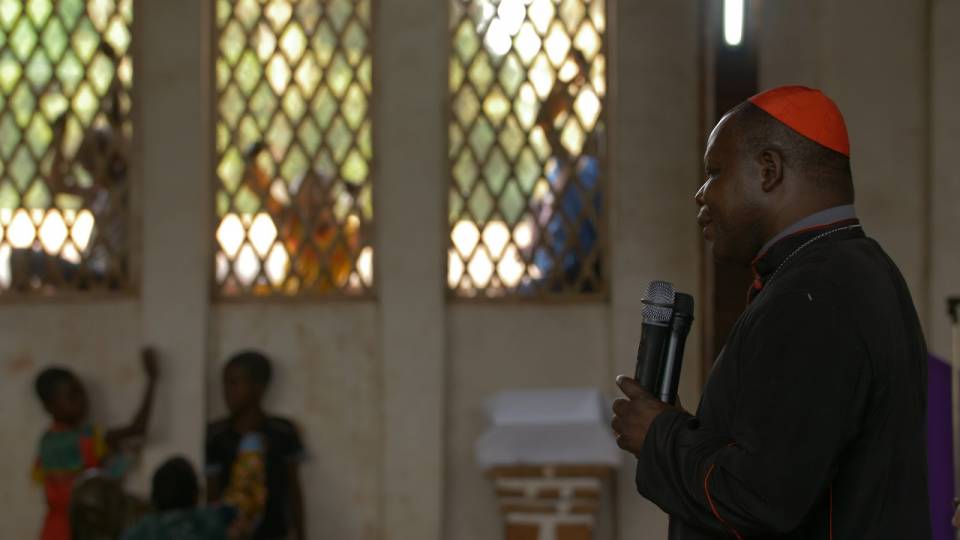 Fighting for Peace (Salt + Light Media 2020)
Overall, I was blown away by the joy and spirituality of the Central African people in the midst of an ongoing conflict. The citizens are desperate for peace, and we hope this documentary enlightens you to the situation our brothers and sisters are facing. During his visit Pope Francis referred to Bangui as the “spiritual capital of the world”, and after visiting it myself I certainly understand why.

HOW CAN I WATCH?

Salt + Light TV is available on most cable and satellite carriers across Canada. To find out what channel we’re on or how to subscribe, click here. No TV? No problem! Click here to watch us online. You can also click here to view our complete schedule.

Fighting for Peace is an episode of Charity Without Borders. Click here or on the image above to go the the website and watch the trailer.