Today is Canada's turn to celebrate Saint André Bessette. And we did not disappoint! 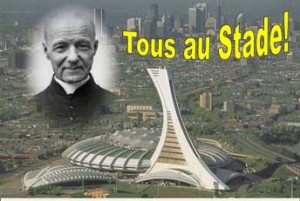 There were over 45,000 gathered in Montreal's Olympic Stadium for the Thanksgiving Celebration. Among those were the Archbishop of Montreal, Cardinal Jean-Claude Turcotte, the Apostolic Nuncio to Canada, Archbishop Pedro Lopez Quintana, 58 Canadian Bishops and many religious from Br. André's Congregation of Holy Cross. Also present were many notable officials from the Canadian Government. Prime Minister Stephen Harper, the Premier of Quebec Jean Charest and the Lieutenant Governor of Quebec.

Homily of Cardinal Jean-Claude Turcotte, Archbishop of Montreal: Dear friends, Brother André lived in an era quite different than our own. Having died in 1937, he did not know nor could have foreseen the profound transformations that occurred in our society and in our Church since the 1960s. In many ways, his manner of thinking, his manner of being, his words, his expressions of Christian faith, and his piety differ from our own. He is from another era, one could say. He had not yet been recognized officially as a saint; and the Church never canonizes someone solely for who he was and how he lived before. She canonizes someone also for what he has to say to and show the men and women of today. What then does he have to say to us? What then can be shown to us by Brother André, who, in his time, was recognized as a great miracle worker and had the audacity to undertake construction, on Mount Royal, of what would become the largest oratory dedicated to Saint Joseph. He first tells us and shows us that life is beautiful and fruitful when it is oriented towards listening to and serving others. Brother André was a man of attentiveness and compassion. He left it up to all those who were unhappy—rich or poor—to approach him. Very often, he went to those who could not come to him. Almost every day, in his office, for hours and hours, he lent his ear. He made himself attentive to those who confided in him their misfortunes, their sufferings, their illnesses, their disappointments, their failures, their unhappiness… After listening, he comforted them. He called them to courage and hope. He exhorted them to trust in God. He prayed a lot for those who spoke to him. He prayed to God. He prayed to Mary. With fervour, he prayed to St. Joseph, he prayed before Christ on the Cross. One of his friends, Mr. Joseph Pichette, said of him, “Before leaving to visit the sick, he took us to pray with him in the chapel, and he would pray for a long time. During his visits with the sick, he would ask us from time to time to drive him to the church, where he sometimes prayed for an hour or more.” We have just heard these words from the first letter of Peter: “Maintain constant love for one another...serve one another with whatever gift each of you has received.” Brother André lived these words. His life is an invitation to ourselves become people of active listening, people of compassion, people of service, and people of prayer. How many men and women, from children to adolescents to adults to the elderly, would be so much happier, with a sparkle in their eyes, if only someone would take the time to listen to them with love! What Brother André also tells us and shows us is that life is worth living in the company of God. In God, Brother André had a living faith. Not an intellectual faith. Not a complicated faith. Not a faith learned from books. A faith received on the knees of his mother. A faith informed by long times of prayer and meditation. A faith that was bathed in love. If there was one thing that the brother was certain of, it was the love of God. It pleased him to say, “How the good God is good! How He takes care of us!” He also loved to say, “The good God loves us so much, infinitely, he wants us to love Him.” Brother André never doubted the love God had for him. The sufferings that he had to endure—and they were many—never led him to think that God had grown distant or had lost interest in him. Brother André spoke on this subject in words that were simple, yet surprising and luminous. He said, “Those who suffer have something to offer to the good God.” He said, “Don’t ask that your trials would be lifted; ask God more for the grace to bear them well.” He said, “Place yourselves in the hands of the good God; He abandons no one in adversity.” We live in an era when it’s tempting to think that one can live without reference to God. Brother André reminds us that what gives flavour to life and makes it fruitful is living it with God, in His intimacy and in His love. Brother André was convinced that God could use him to accomplish wonderful things. For many decades, people came to him as a worker of wonders. It never went to his head. In fact, he often said: “The world is silly if it thinks that Brother André is doing miracles. It is the good God who does the miracles. Saint Joseph obtains them.”And, following Saint Paul, he said, in reference to God, “An artist makes the most beautiful paintings with the smallest of brushes”. This is not a small Saint that has been canonized, but a great, great one. This great saint—Brother André—is from our home. Among our parents and grandparents, or among the friends of our parents and grandparents, many knew him. He lived close to us on Mount Royal and said, “When I die, I’ll be much closer to the good God than I am now, I will have much more power to help you.” Brother André…Saint Brother André, we pray to you, keep your promise. Pray for us: pray that we become women and men of attentiveness and compassion, women and men who love God with a great love because they know they are very loved by Him, women and men who, having become “disciples” of Jesus, become “meek and humble of heart” like Him and in Him find “rest”. AMEN

Today's celebration is a remarkable affirmation of Canada's love and respect for Saint Brother André and his legacy of devotion and humble service. Pope Benedict XVI's Homily at the Canonization Mass called St. André as a model for Canadian Christians. Today's events are a testament to how true that is. Join host Mary Rose Bacani tonight for English Coverage of the Thanksgiving Mass at Olympic Stadium. The English repeat airs at 9:30 pm ET.