Missionary Congress begins with call to share our faith 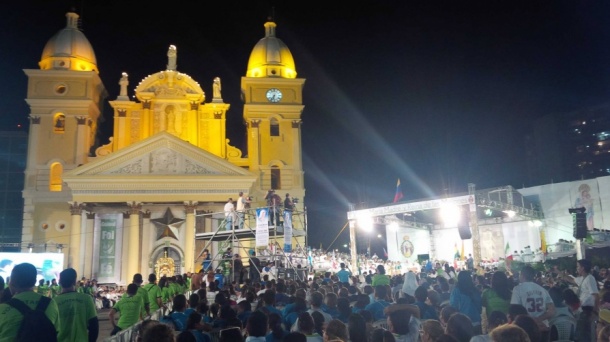 The fourth Missionary Congress of the Americas (CAM 4) and the Ninth Latin American Congress (Comla 9)
began last night with an outdoor Mass on the plaza in front of the Basilica of Maracaibo. The Most Rev. Ubaldo Santana, Archbishop of Maracaibo greeted the 3000 present, “Missionary America, welcome to Maracaibo!” The Mass was presided by Cardinal Fernando Filoni. As prefect of the Congregation for the Evangelization of Peoples he is responsible for missions worldwide. He is also the official Papal representative for this event. During his homily he urged us to have a ministry that puts Christ first. He said that we need to recognize Christ as the true light in order to evangelize. I have to be honest that I don’t remember much more of the homily, and I wasn’t taking notes, but I do remember Cardinal Filoni saying very clearly, “Our church will stop growing if we lose our missionary activity.” These are powerful words for a Church that is often laid back and shy when it comes to sharing our Faith. This is why the motto of the event, “Missionary America, share your faith!” is so relevant. The Mass began with the arrival of the participants from the 24 different countries of the American continent. As each delegation came up the middle aisle, the volunteers and the master of ceremonies would call them by country name and cheer, “welcome to Venezuela!” There was much excitement when the Canadian delegation began giving away small Canadian flags and Canada flag pins. 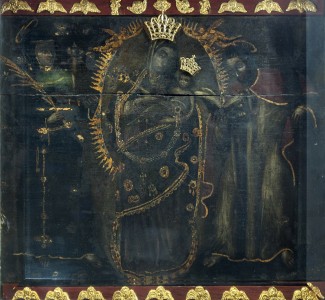 The opening procession was also led by the local miraculous image of Our Lady of Chiquinquira, Patroness of the Venezuelan State of Zulia. In the early 1700s an elderly woman picked up a small piece of wood at the lake while doing laundry because she thought that it looked as if there was an image of Mary. She took it home to wash it and hung it on her wall. The next day, the image was resplendent and became more and more distinct. Today, this small piece of wood is enthroned at the Basilica of Maracaibo.  The image of Our Lady of Chiquinquira was joined by the relics of St. Therese of Liseux, Patron Saint of World Missions, which are in Venezuela for this event. Before and after the Mass, I had the chance to speak to many of the participants; from Puerto Rico, from Ecuador, Bolivia, Panama and Brazil. Why are they here? To rekindle that missionary flame; to share our faith; to recharge our missionary batteries. I spoke to many young people, mostly Venezuelan who said that they were already missionaries or that they wanted to be missionaries. They truly looked up to the older missionaries who are here. Why do they want to be missionaries? Because they are full of the joy of the Gospel. That's the joy of the Gospel that Pope Francis' first Apostolic Exhortation, Evangelii Gaudium is all about. We must share our faith. And we must do it with joy. We must share it in every way possible and not be ashamed, embarrassed or shy about it. That’s the first step. So it was encouraging to hear all those present, responding to the call. When the MC cried out: “Missionary America” they would all respond in one voice: “share your faith!” I hope that we, in Canada, can respond in the same way.