Message from Pope Francis for feast of Our Lady of Guadalupe 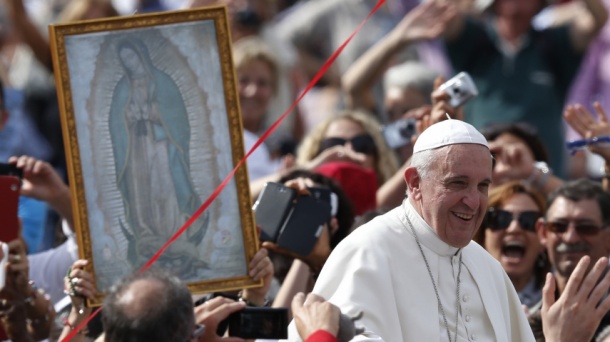 At the end of his weekly General Audience on December 11, Pope Francis had this message for the faithful of the American continent.
Tomorrow is the feast of Our Lady of Guadalupe, the Patroness of the Americas. I would like to greet all my brothers and sisters on that continent, and I do so thinking of the Virgin of Tepeyac.
When Our Lady appeared to Saint Juan Diego, her face was that of a woman of mixed blood, a mestiza, and her garments bore many symbols of the native culture. Like Jesus, Mary is close to all her sons and daughters; as a concerned mother, she accompanies them on their way through life. She shares all the joys and hopes, the sorrows and troubles of God’s People, which is made up of men and women of every race and nation.
When the image of the Virgin appeared on the tilma of Juan Diego, it was the prophecy of an embrace: Mary’s embrace of all the peoples of the vast expanses of America – the peoples who already lived there, and those who were yet to come. Mary’s embrace showed what America – North and South – is called to be: a land where different peoples come together; a land prepared to accept human life at every stage, from the mother’s womb to old age; a land which welcomes immigrants, and the poor and the marginalized, in every age. A land of generosity.
That is the message of Our Lady of Guadalupe, and it is also my message, the message of the Church. I ask all the people of the Americas to open wide their arms, like the Virgin, with love and tenderness.
---
(CNS Photo/Paul Haring)