Christian communities that follow the Julian calendar observe Christmas on January 7th, 13 days after the Gregorian-calendar Christmas. So, to our Christian brothers and sisters who celebrate today – including Ukrainians, Russians, Serbians, Macedonians, Bulgarians, Romanians, Belarusians and others – we wish you a very Merry Christmas! 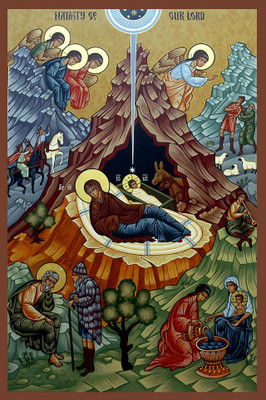 I had a chance to chat with Fr. Stephen Wojcichowsky, Director of the Metropolitan Andrey Sheptytsky Institute in Ottawa, a specialized institution to spread knowledge of the Christian East. We talked about the Julian-calendar Christmas.

Fr. Stephen: First of all, it connects them to their roots, the tradition of their ancestors. As well, many people have family in other parts of the world where the Julian calendar is the predominant liturgical calendar. It is to be in solidarity with them that they observe it. In addition, many find that celebrating the Lord’s Nativity at a time after all the hype and glitter of the Gregorian Christmas has passed allows for a more spiritual focus to the observance. Still others believe that following the Julian calendar allows them to be more faithful to the traditional dating of Easter (or “Pascha” as it is known in the Eastern Christian tradition). MR: What are some of the special traditions for January 6th and 7th for those who follow the Julian- calendar Christmas? Fr. Stephen: Christmas really starts on Jan. 6th, on the Eve of Christmas. We always celebrate the Eve of Christmas in a big way because it’s an important preparatory day. We pray the Royal Hours (similar to the liturgy of the hours), we celebrate a Divine Liturgy with Vespers (the Divine Liturgy of St. Basil the Great instead of the more common Divine Liturgy of Saint John Chrysostom), and then we have a special 12-course meatless meal at home which we call the Holy Supper. Sometimes parishes will share the meal together. Here at the Metropolitan Andrey Sheptytsky Institute, we celebrate with the local community. On January 6th, we’ll be over at the Holy Spirit Seminary, where we’ll have the Holy Supper at six o’clock, and then the Office of Compline at 9 pm, ending with the Nativity liturgy at 11 pm. It’ll go well beyond midnight. We don’t start our Institute classes this week to allow professors and students to be with their families. MR: Do you also celebrate the Christmas octave? Fr. Stephen: Yes, absolutely, and not only the octave -- we celebrate for 40 days! What Roman Catholics call Epiphany, we call Theophany. On January 6th or 19th (depending upon the calendar), we celebrate Theophany, and we do this for 8 days. It’s like a special interlude in the 40 days of Christmas. MR: What are your favourite parts of the celebrations? Fr. Stephen: Certainly, liturgically, the parts of the liturgy are so rich with symbols, so rich with the depth of understanding of the theology and magnificence of what this Incarnation of the Lord means for us. On a family level, of course, the 12-course meatless meal is always a highlight for us. The day of preparation for a big feast is usually a fast day. Now, if you had this meal, you wouldn’t feel like you fasted in terms of food intake, but at least it’s abstinence from meat. It’s also a way to get back to the earth. Our Ukrainian ancestors were very tied to the rhythm of nature and the cycle of the seasons, so we use grains, the harvest of the earth. We have a special dish we call kutia (pronounced koot-ya), made up of boiled wheat, poppy seeds, honey, nuts. That’s the first dish everybody will taste. At the end of the prayer, the head of the household, holding a spoonful of this kutia, will wish everybody the very best of the holy season and throw a spoonful of it onto the ceiling. This is a throwback to the ancient days – the idea was that however many grains that stick on the ceiling will be an indication of how bountiful your livestock will be and what an abundance of eggs your chicken will lay. So you see, for us, it’s not only human beings that were renewed by the Lord’s birth. All of creation was touched by the Incarnation, and during Christmas, we celebrate that.

To find out more about the Metropolitan Andrey Sheptytsky Institute in Ottawa, Ontario, visit HERE. Also, check out the Catholic Focus episode The Light of the East: Understanding the Eastern Catholic Churches by going to the Catholic Focus webpage HERE. And once again, from all of us at Salt + Light, a very merry Christmas to our brothers and sisters of the Eastern Christian tradition!