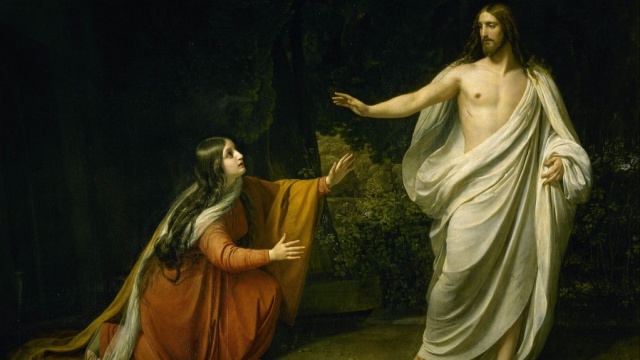 On the Feast of Mary Magdalene - July 22 "Love the sinner, hate the sin." The famous catchphrase first appeared in the letters of St. Augustine, when he wrote, "With love for humanity and hatred of sins." It was later included in the autobiography of Mohandas Gandhi as "Hate the sin and not the sinner." But I can't think of any figure who better exemplifies the essence of this phrase than Mary Magdalene, whose feast we celebrate today. What can we learn from the life of Mary Magdalene? The Gospels reveal a woman marked by a past of "demons" who encountered the forgiveness of Jesus and was forever changed. For Mary Magdalene, Jesus changed everything. His healing power in her life meant that she could no longer remain who she was, she was transformed: she became new in the love of Jesus. Set free of the seven demons that had possessed her – whatever their nature – she pursued a path of loving devotion, of closely following Jesus, of being part of the community of disciples, of putting Christ before all things, and of moving forward in the mercy he brought her. What does this mean for us? I think we all know how easy it can be to become discouraged, disappointed, ashamed, and despairing, mired in the guilt, anger, regret, and frustration produced by our own faults and the faults those around us. We spin a cocoon of negative emotion that paralyzes us in our own selves. But Mary Magdalene shows us that there is something greater than our sinfulness, our shortcomings and the strife they cause; rather, that there is some One greater. Mary Magdalene could have fixated on her demons – whether they were bad choices she'd made or misfortunes she'd experienced through no fault of her own. Instead, she reached out to Jesus and allowed herself to be made new. She allowed his love to be more powerful than her sins, and her demons gave way to discipleship. For the Christian, this life-changing encounter with the merciful love of God through Jesus Christ is not just a one-time experience but a constant renewal brought about by the transformative power of Christ at work in our lives. This love is offered to us each day of our lives, especially when we fail, fall, and flounder. Do we receive it? Do we accept it? Are we open to it? Do we allow it to renew us and urge us on? Does it leave us forever changed? Mary Magdalene had not one demon but seven. Her story is relevant for us no matter what our demons may be. She was a sinner but more than that, she was loved. She allowed her life to become a response of love to the one who loved her first. Weeping she would remain with him at the foot of the the Cross, despairing as he hung dying for the world. "While it was still dark" on that Easter morning, burdened with tears and spices for burial she would venture early to his empty tomb, astonished to encounter him anew and sent forth to exclaim: "I have seen the Lord!" (John 20:18) The Mercy she encountered sends her forth on mission, not caught up in her own past but urged on by the love of her Lord: transformed to share his transformative love with all the world.